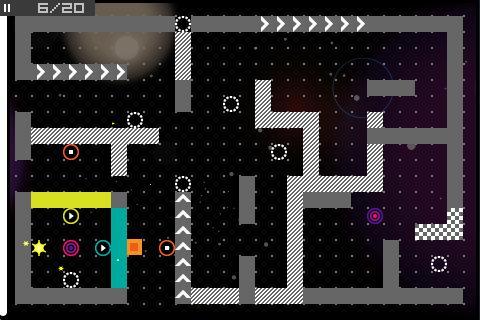 Physics based puzzling that’s bound to pull you in

Gravity Block joins the growing list of games that look like something you might have found yourself playing in the ’80s (if you were alive then), but which play by some very modern rules. In this case those rules involve brain-melting physics-based puzzles, as you steer your block around by adjusting the pull of gravity.

Initial impressions of this familiar mix are that it’s a little pretentious – the knowingly austere visuals, the abstract-ambient soundtrack and level sets named ‘Galileo,’ ‘Kepler’ and ‘Einstein.’ It all comes across as slightly affected. Ultimately, though, none of that matters as long as the game is good, and I’m happy to report that Gravity Block is just that.

The perfectly pitched tutorial introduces you to the core mechanics by showing more than telling. Touching the four sectors of the screen – up, down, left and right – changes the gravitational pull of each level in that direction, dragging your little orange cube around the assorted mazes accordingly.

The goal for each stage is to reach the star at the end, using as few gravity shifts as possible. Along the way there are deadly black holes to avoid, switches to pull and crumbling or shifting platforms to negotiate – the kind of obstacles you’d find in your average platformer. There’s also the ever-present risk of tumbling off the stage altogether and into the 8-bit void.

Thankfully, there’s no time factor at play here. The delicately implemented physics mean that trying to speed through a level will destabilize your block in no time, so it’s a welcome omission. That might sound like a small point, but you’d be surprised at the number games spoiled by the inclusion of an inappropriate timing element.

The avid gamers among you will have spotted numerous reference points for the Gravity Block formula, including countless App Store maze-puzzle and platform games. But perhaps the most interesting influence comes from Valve’s seminal PC and console title Portal.

Gravity Block embraces that game’s clever interplay between teleportation and inertia. When entering one of the game’s wormholes you need to pay close attention to the direction of gravity at the point of entry, as this will affect the way you’re deposited at the other end. 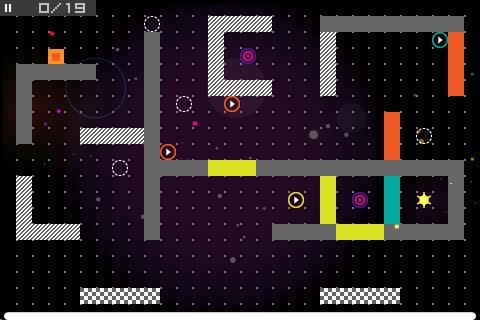 At the end of each set of levels, the total number of moves used is uploaded to an OpenFeint-powered online table. Such broad parameters encourage you to go back and pinpoint opportunities during individual levels in which you can shave a point or two off your total. It almost resembles a round of golf.

It’s a shame that half of Gravity Block‘s 60 levels (not including the tutorial) are closed off from the start, requiring an in-app purchase to unlock them. Like the level packs, the names of the two halves are a little tough to stomach. Note to the developer: if I’ve just bought a game, I don’t want to be told I only have access to the ‘Normal’ levels, with the ‘Premium’ examples requiring a further outlay (no matter how small).

Semantics aside, though, Gravity Block provides a stiff challenge even in its default guise. You may not need to be Einstein to solve its tougher levels, as the game suggests, but you’ll certainly need to have played a few of these sorts of games before.

And that seems to be the real target audience here. While supremely accessible thanks to an excellent tutorial, Gravity Block is really for the hardened puzzle nut. With its list of reference points and retro stylings, it’s a game for those seeking an accomplished old skool challenge with a modern twist.