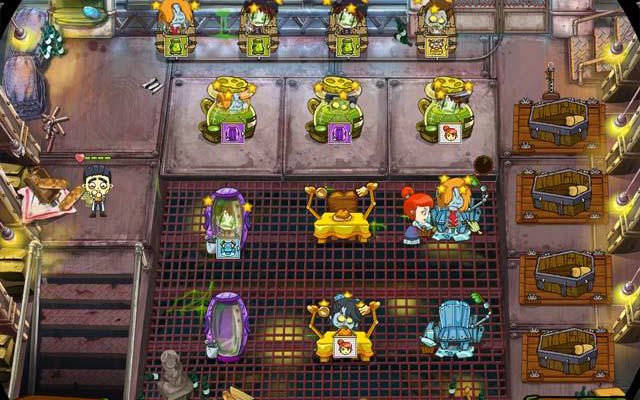 Join zombie wranglers Johnny and Bonnie Loca as they fight to protect the world from Pastryport’s zombie outbreak.

Some ideas never seem to get old. Zombies, for instance, seem to hold an endless fascination for us, and time management games seem to have a similarly evergreen appeal. In 2012, Anino Games bundled the two concepts into one ghoulishly frantic package in Grave Mania: Undead Fever, and this year they bring us the sequel to that game, Grave Mania: Pandemic Pandemonium. While this new offering’s not significantly different from its predecessor, it does offer a more streamlined approach to time management.

We were first introduced to Bonnie and Johnny Loca in Grave Mania: Undead Fever. These two finger puppet funeral parlor owners saved the day when the town of Pastryport was assailed by a zombie outbreak after eating a contagious cake. Working their way across the United States, they used their undead expertise to save town after town from zombie invasion. In Pandemic Pandemonium, the Locas are back, this time to discover the cause of the outbreak and prevent it from reaching global proportions. 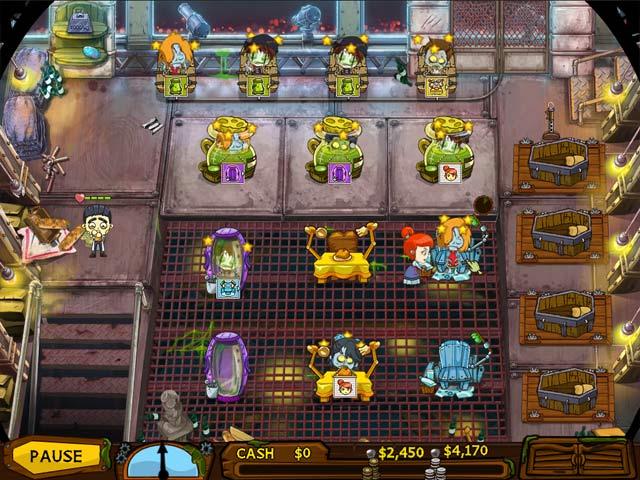 As in most time-management games, the idea is to do many things at once within a set time limit; in this case, it’s preparing zombies for permanent burial. Back in Pastryport, the Locas devised a method of putting zombies into a forever-sleep by soaking them in a special green formula, so you start by doing that. Within the Locas specially-equipped workshop, you move zombies among various stations, performing different services for them: setting their bones, cleaning their teeth, feeding them, taking their pictures and ultimately, packing them into a casket for burial.

Each well-prepared zombie earns you a set number of dollars and a certain dollar amount needs to be accrued each level in order to clear it. As you can imagine, time is of the essence, not only because the clock’s ticking, but because your zombie clients get restless. If too much time passes, they jump off their stations and start lurching around the workshop, chomping on people and trying to escape. When that happens, you’ve got to jog over and ahem—”confirm their cooperation” by hitting them over the head.  All in all, it’s a fairly straightforward mechanic, with which any time-management fan will be quickly at home.

The first Grave Mania game’s strategy for making things interesting featured different types of zombies. That idea repeats itself here with new zombie varieties (like mimes, hula girls and yetis, or “zetis,” as they’re called) that move at different speeds and are harder or easier to stun. Also repeated is the idea of mid-gameplay mini-games. Upon placing a zombie into a station, a window often pops up asking you to play a five to ten second mini-game. If you perform these successfully within the time limit, you get a bonus. The main difference between the mini-games in the last game and the ones here is the way they’re presented; since the first Grave Mania, things are a bit more streamlined. 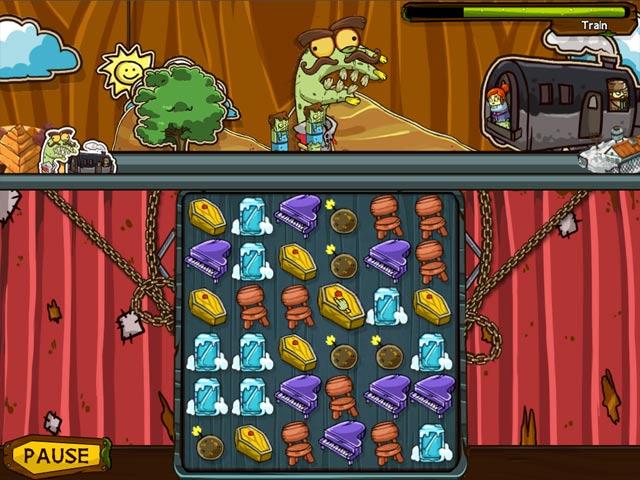 For one thing, the mini-game window’s smaller and no longer blocks the entire screen. For another, you no longer have to click the “done” button to close the mini-game window. These are good changes to be sure, but the mini-games’ rate of appearance is still more or less the same; they appear far too often, and are a bothersome momentum-killer. Another not-so-welcome repeat from the first game is the zombie butler/assistant. Previously, you acquired these by stunning them as they came wandering randomly through the workshop; this time you have to collect their parts which are hidden in multiple game levels. However you acquire them, their usefulness is limited. They still can’t be directly controlled, and although they’re supposed to auto-assist you, they spend most of their time standing around looking bored while you rush around like your pants are on fire.

Still, Pandemic Pandemonium is highly entertaining. You and the Locas travel around the world looking for the source of the epidemic, riding trains, hopping cruise ships, and stopping in places like Paris, Egypt, Hawaii and Mexico. Although many graphic elements from the first game appear to have been reused, each new location presents a new themed workshop. And while you’re doing more or less the same things you were in the first Grave Mania, the new zombie types and new location-themed music manage to add some interest. Finally, every five levels or so the time-management thing is broken up with a different game mode, like a turret shooter or a match-three chase sequence or a zombie version of whack-a-mole. 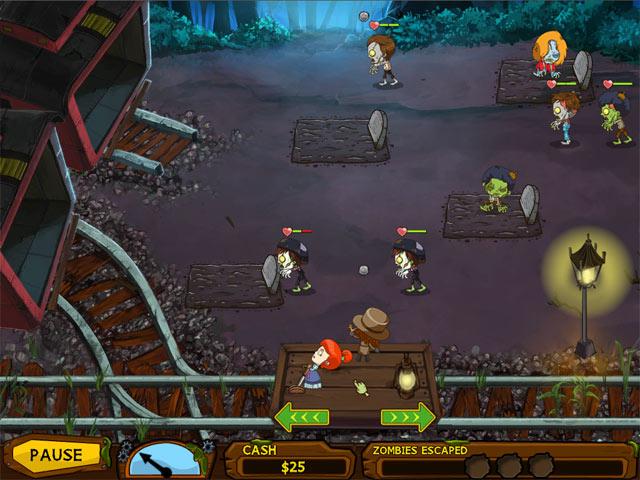 Although it might have benefited from broader innovation, Pandemic Pandemonium still succeeds by taking us to new, exotic locations and by removing some of the clunkier aspects of the first game. Its cute story helps too, as does is its clever finger-puppet theater presentation. While I could have wished for greater differences between the first and second Grave Mania games, when I review the hours spent playing Grave Mania: Pandemic Pandemonium I can say that aside from those pesky mini-games, I enjoyed every moment of it.