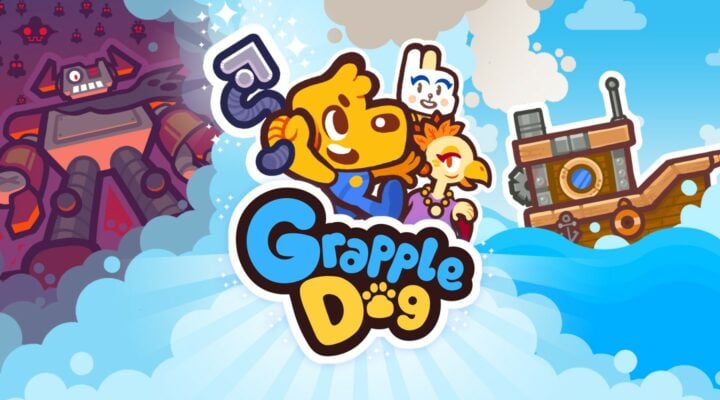 Fortunately its good looks aren’t just for show, with the game boasting a (literal) gameplay hook that is satisfying and used to good effect throughout.

A 2D platformer where you play as the titular grapple dog, you can ground pound, jump, and grapple – with the latter allowing you to grab blue coloured surfaces and swing back and forth. There are also barrels that can throw you in a set direction a la Donkey Kong Country.

It’s with the grapple where the game really shines though, and although it’s a little tricky to pick up its intricacies initially it doesn’t take long for you to start throwing yourself around levels with it with confidence.

The level design is usually fairly straightforward, with an emphasis on wall jumping when you’re not using the hook – but it’s all put forward with such confidence it’s hard not to be won over.

There are very few occasions where you feel cheated when you lose a life – arguably the game is too generous with its continues in fact.

When collecting all five gems on each stage some can’t be collected if you go past a certain point though, which is irksome. Also progress near the end is gated if you don’t collect enough of these gems, which is perhaps a tad unfair to younger players.

At some points the mechanics can feel a little tired too, but there’s often a new element added in to maintain your interest – be it specific allies that help you out in each world or a new trickier enemy

It’s just a well put together package overall however, with a large number of levels – main, bonus, and boss varieties – to work your way through.

It’s clearly been put together with care, with a great soundtrack as well as some incidental visual flourishes that elevate the whole experience.

Ultimately Grapple Dog is a well priced platformer that’s clearly a labour of love for all involved, and is essential if you’re looking for a new 2D platformer on your Switch.

Mourning Star Review – A Fitting End to the Universe