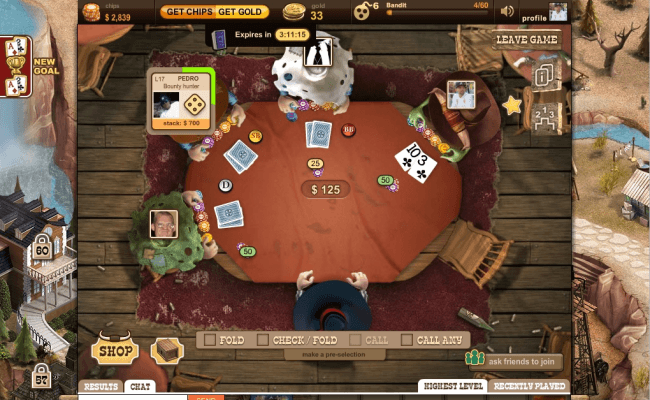 Lots of cowboy hats, a dash of poker, and little else

I want to get something on the record right away: I did not vote for anyone to become Governor of Poker, and I wasn’t even aware such a thing existed. My editor says it might be an appointed position. Anyway, the series of poker games by that same name has made its way to Facebook in the form of Governor of Poker: Texas Tycoon, and… well, it’s a poker game. Yep, it’s definitely a poker game.

It’s not a great sign that Texas Tycoon asks if you want to pay to double your starting amount of gold (the game’s premium currency) the first time you log in. Sure it’s only a couple of bucks, but why so forward? Let’s take some time to get to know each other first. 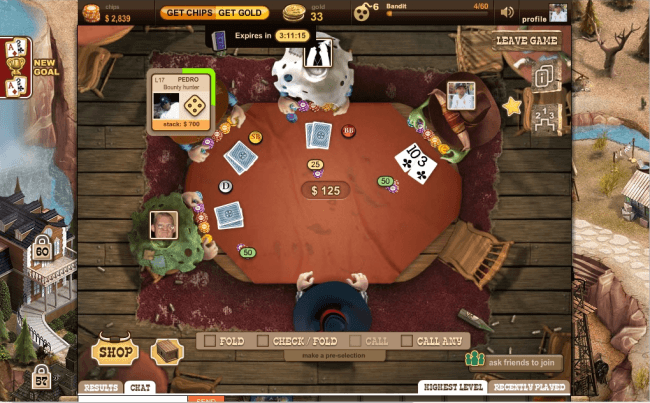 And while everything might be bigger in Texas, you have to start small and work your way up in this one. The idea is to play your way through a series of buildings, leveling up and continuing on until you are playing in what appears to be the governor’s mansion. Again, I’m not sure that’s the way it works in real life, but it wouldn’t be a bad hook if it was explained at all. It really isn’t though, and you simply start out in a small game for low stakes.

When you’re ready to play some poker, you can choose to play with up to four other friends or random players. A series of goals appears in the upper-left corner of the screen, giving you some direction aside from just winning hands. Experience points are earned by completing these goals and simply winning hands, and leveling up allows you to play in bigger games. 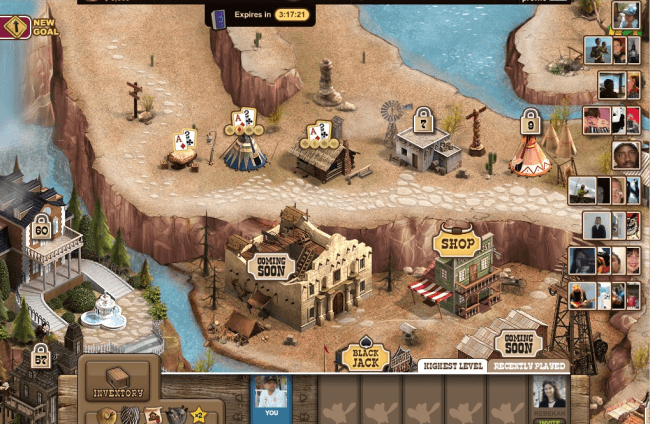 The actual poker interface isn’t spectacular, but it’s certainly acceptable. A top-down view of the felt doesn’t leave much room for visual customization of the player avatars, though there is an impressive selection of cowboy hats to wear. The avatars also have cool animations, actually rapping on the table to signal for the check and motioning for won pots to be pushed their way.

Unfortunately, the animation slows the game down a bit, and the one thing an online poker game can’t afford is to poke around. Let’s get the next hand dealt please. It’s also difficult to size bets with the slider, and it would be nice to have shortcuts for common bets and raises (like half or two-thirds of the pot). Otherwise everything else works pretty well, and the dealer voice actually calling out the action is helpful in case you’re trying to multi-task while playing.

Achievements pop up from time to time for things like busting multiple players on a single hand. You can rebuy if you’re the one who loses everything in front of you, but it costs gold, which I found strange -especially since you can simply get up from the table, go back to the main screen and sit back down again without giving up any gold. 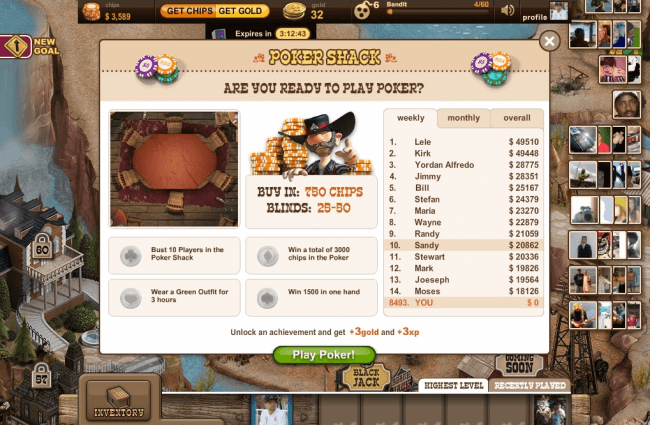 The chips you win are mainly for playing for higher stakes and buying different cowboy hats, but gold can help you purchase a few extras in the in-game store. VIP Passes unlock all buildings for a limited time, and there are XP boosts and special card decks as well. You do get gold when you level up, which is nice, but the game keeps after you to spend it, which isn’t so pleasant.

Some of the previous Governor of Poker games had more going on in terms of story or things to do, making Texas Tycoon a little bare bones. If you have Facebook friends already playing, it’s probably a good choice for hopping on and quickly getting to play some cards with them, but otherwise it doesn’t do much to separate itself from numerous similar titles. Running for some other fictional office might be a better use of your time.