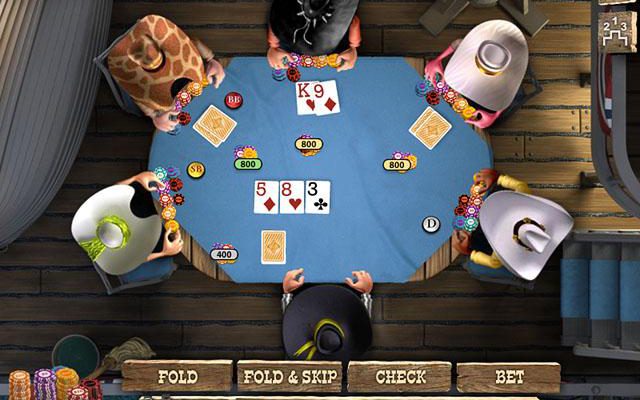 Poker isn’t the most accessible game around, what with its complex rules and subtle nuances. Video game representations of the game tend to run the gamut between being overly realistic, and thus too complicated, or far too simple and lacking much in the way of depth. Governor of Poker 2 manages to find a nice balance in between these two extremes, offering up a poker game that is very accessible without being too simplistic. But if you played the first game, Governor of Poker 2 might be a little too familiar.

There’s a bare bones story holding the game together, and it’s as goofy as you’d expect. The governor has declared poker illegal until he’s satisfied that it is indeed a game of skill and not chance. You’ll travel all over Texas, visiting numerous towns and cities, moving up the ranks, all in the name of spreading the good word about poker in order to change the governor’s mind. 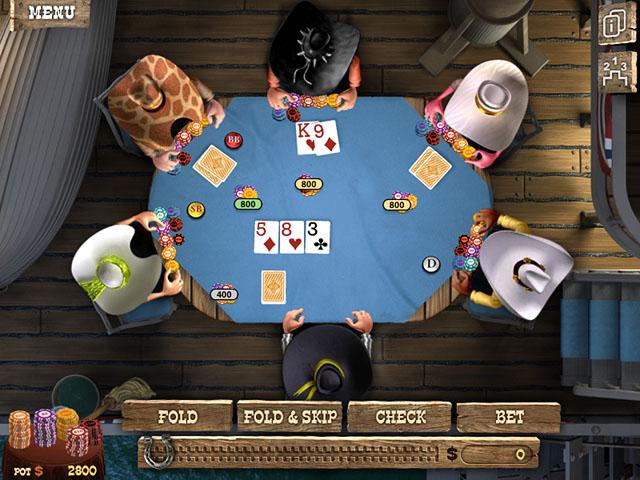 Of course, in a poker game, the story is largely unimportant. Thankfully it doesn’t play too big of a role in the game. Instead, the majority of your time will be spent, naturally, at the poker table. Governor of Poker 2once again features Texas Hold ‘Em style poker, and the process has been streamlined to make things as easy to understand as possible. There’s a fairly in-depth and very helpful tutorial that explains the ins and outs of the game, so those new to poker can learn how it’s played before diving in.

When you’re actually playing there’s also a cheat sheet in the top corner, which you can check at any time to remind yourself of the various possible hands, and how they relate to one another. The various commands at your disposal are also very clear and easy to understand, so you’ll always know what your options are. Meanwhile, you can also keep an eye on your opponents reactions. Though you can only see their giant hats and not their faces, you’ll occasionally see characters sweating nervously or drumming their fingers impatiently. These status changes are supposed to affect the way the other players actually play, but if there is any such affect, it isn’t very obvious when you’re in a game.

There are two different times of games you can join: cash games and organized tournaments. You can play one each day, provided you have enough cash to buy-in, and the two feature a number of important differences. The cash games are winner takes all, so even if you come in second you’ll come away empty handed. You can also bet with property in cash games, in addition to chips. Meanwhile, in tournaments, the top three players all earn some money, with the first place player taking home the biggest haul.

As in the previous game, you can use your earnings to invest in property. Doing so will earn you a small amount of income each day and is also necessary for progressing from one city to the next. If you are low on funds you can also sell back property, or you can take out a loan from the bank. However, you’re only allowed a limited amount of money on loan, and you can’t buy any property if you owe the bank money. And if you aren’t careful, it can be pretty easy to dig yourself into a hole, leaving you stuck with no assets and a giant loan to pay back. You can also spend your money on a fancy new hat, which does nothing except for make you look cool. 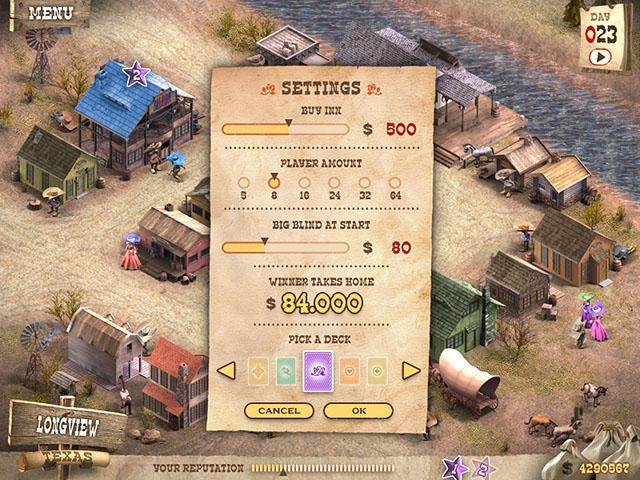 Considering the fact that all you can see of the characters in the game are their comically large hats and skinny little arms, they feature a surprising amount of personality. The animations look great, as you’ll see characters do everything from flipping chips into the air to banging their fists on the table. It’s a small thing, but it gives the game a certain charm. It’s also pretty amazing just how many different hats the developers managed to squeeze into the game.

Just be sure to play with the sound off, as the voice acting can be incredibly annoying. A disembodied voice provides useless and repetitive play-by-play for each game, while your opponents frequently spout off goofy one-liners like “these chips are mine!” which will soon have you reaching for the volume dial.

Governor of Poker 2 might not do much differently when compared to its predecessor, but it’s still a great entry point for those looking to dip their toes in the poker waters. Its excellent tutorial will help introduce players to the game, while the rest of the experience lets them test out their new skills. Seasoned poker veterans might find the game a little too simplified, but for everyone else it’s a Royal Flush.