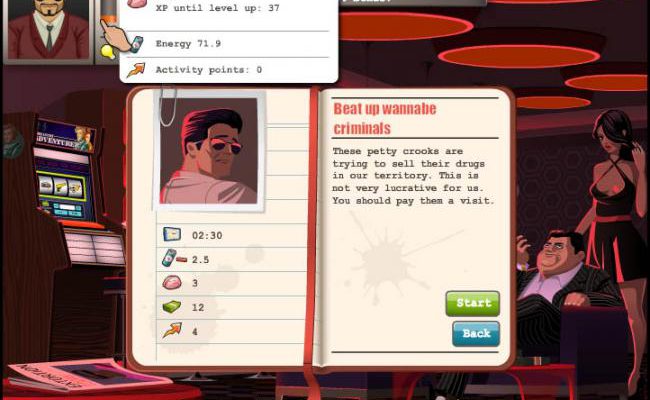 Goodgame Mafia tries to resurrect a dying genre on Facebook

German developer Goodgame Studios is hoping to revive a slowly declining genre on Facebook with Goodgame Mafia. A child of the text-based role-playing games of yesteryear, the game is a bit more visual in its presentation, but offers little in terms of a hook or anything particularly new. Even worse, for a game centered around organized crime, it is notoriously slow paced, even for a social game, and grants minimal gratification or reward for playing and progressing.

When you first start out in Goodgame Mafia you’re given the option of a tutorial, but no real premise to hook you into the world. You’re just a criminal because the game says you are. To play, you visit The Godfather and accept missions from him and his cronies within his personal lounge. Each quest takes a period of time to complete, and consumes rechargeable energy. Even this early, however, the issues begin to appear. 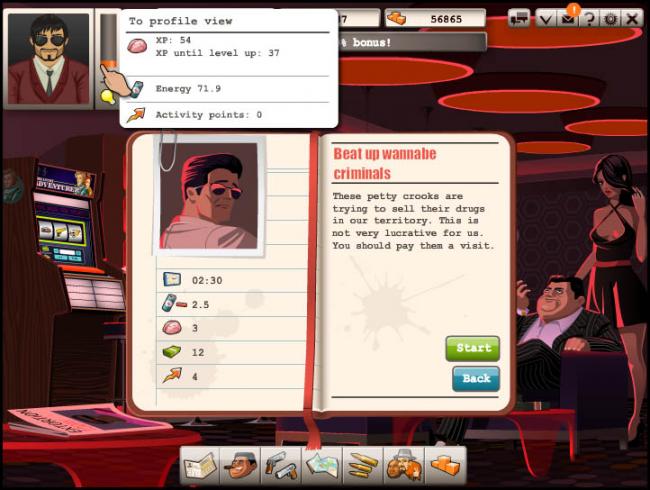 In most RPGs of this nature, you’ll perform quests instantly at a cost of energy. In the cases where you cannot, there is typically something else to keep you occupied. This isn’t the case with Goodgame Mafia. You must sit and wait for a mission to finish before starting another. Moreover, there is nothing to do while waiting as the game requires you to level up in order to unlock most of the rest of the game features (aside from a store to buy items).

The only option available is to “face-off” against a random player every 10 minutes for a chance at some extra cash (there is an option to search for a specific player). This is all automated, however, with your statistics affecting the outcome. Also, it is worth noting that each quests ends with this exact same, automated type of fight.

While it is not uncommon to have a level requirement for features, Goodgame tends to go a bit overboard on two fronts. Since the only way to gain experience is through quests, you’re stuck gaining about one or two experience points every couple of minutes. This makes progression painfully slow, with the only useful gameplay being to do these arbitrary tasks. To add insult to injury, you can’t even use virtual currency to expedite missions until level 10. You need to feel like you’re getting somewhere when you start a new game, and such is not the case with Goodgame Mafia.

There isn’t even much in terms of rewards. Occasionally you’ll acquire items from quests that will boost your stats — increasing things like damage, critical strike rating, and defense — but they are nothing more than icons. It is a moderate reward, as you do get stronger with them, but other than the increase of some numbers, there’s nothing terribly gratifying about them. In a way, this isn’t so much an issue with Goodgame Mafia as it is with the space of Facebook RPGs in general. With more ambitious games such as Adventure World, social gamers are just looking for more now. Even the infamous Mafia Wars has been in steady decline in recent months, though a sequel is on the way. 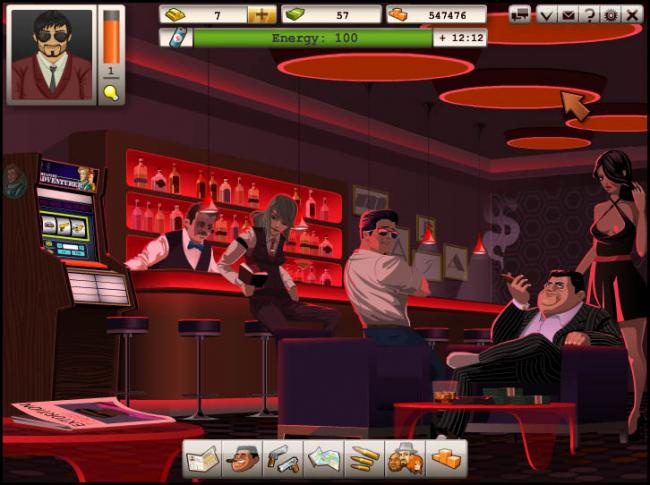 Even the social play is weak in Goodgame Mafia. Other than attacking other players, the only thing available at the start is a leaderboard. You can’t even start a “family” with friends, which is essentially a guild or clan of friends that offer bonuses in game, until level 15. You can, at least, search for one to join.

Goodgame Mafia does have a moderately interesting feature called “Gang Wars,” which unlocks at level eight. Here you can battle against gang members once every hour and earn more powerful item rewards with each one you defeat.

Goodgame Mafia is part of a dying breed of Facebook game. It doesn’t do anything to really stand out, and even the artwork that it has, while not bad, is static and listless. Even so, this pales in comparison to the sheer lack of interesting gameplay and tragically slow pace of the game. New players are likely going to up and leave as they can only do one mission every few minutes, leading to incredibly slow leveling. And you’re able to do virtually nothing else, as the majority of the game is locked until level requirements are met. In short, Goodgame Mafia is a dated game design and is ultimately boring.