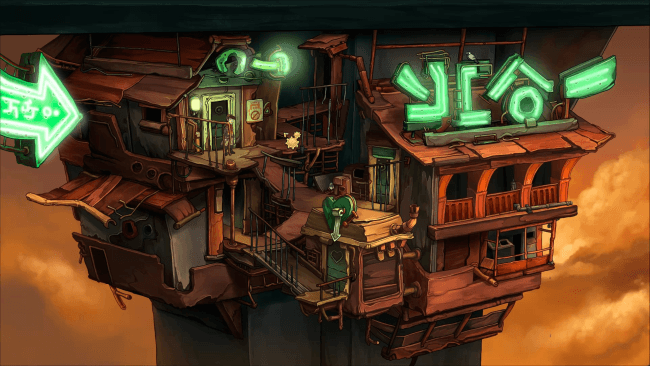 Farewell to both Deponia and its logic

Goodbyes are often some of the hardest things to do in life: especially when it’s time to say goodbye to one of the most applauded series of adventure games that we’ve played in quite some time. Goodbye Deponia picks up right where Chaos on Deponia left off, with our ragtag band of heroes Rufus, Goal, Doc and Bozo on their way to the floating utopia of Elysium to stop Organon and company from destroying Deponia once and for all. The story is full of some nice twists and turns (most of which are on account of something Rufus has said or done), and the sharp and humorous wit of Daedalic’s many flawed characters makes for one hell of a conclusion to this fine trilogy of modern point-and-click adventure games.

It will probably come as no surprise to those of you who are already familiar with Daedalic’s impressive roster of point-and-click adventure games, but Goodbye Deponia positively shines in its presentation. The stylized cartoony visuals are constantly bursting with color and personality, and the different locations you’ll adventure to around Deponia and Elysium are a breath of fresh air to the genre. The sound quality is also extremely top-notch as always, with witty musical numbers and some of the best vocal performances I’ve ever heard in a point-and-click adventure game. The animations are syrupy slick and smooth, and the only real hiccup I found on the technical side of things was in the abruptness of some of the cutscenes, where the screen would quickly cut to black at regular intervals, resulting in some pretty choppy transitions to the overall storytelling. 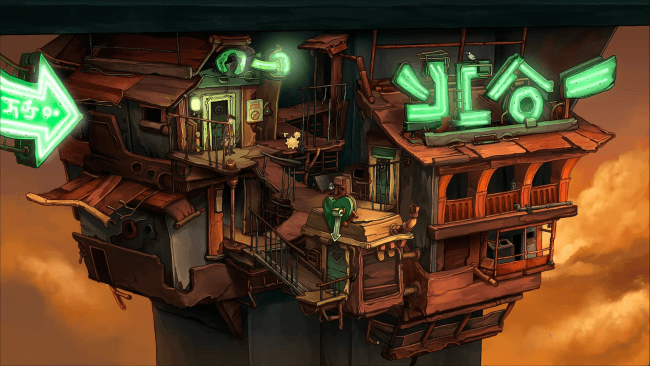 Serving as the perfect complement to the game’s visual presentation is the actual writing, which packs in so much of the situational humor and squabbling banter and asides that fans would only expect from Rufus and his crew. In fact, much like the first two games in the Deponia series, the question of whether or not you’ll find the game’s humor appealing will largely depend on how much you like the half-witted backwards hero Rufus himself. Rufus can definitely be an acquired taste for some, and his sheer stupidity at times and roundabout ways of thinking can be a little much to take at first. But if you’ve made it this far into the trilogy, then the odds are that you find our hero’s helter-skelter methods oddly endearing, and truth be told, Daedalic really allows Rufus to shine here for the majority of Goodbye Deponia.

Some of my favorite moments in the game actually occur in Goodbye Deponia‘s opening segments, where the characters regularly break the fourth wall and address past events that happened on Deponia, which players will remember from the first two games. For instance, the optional tutorial is a lesson in gaming self-awareness, with Rufus’s ex-girlfriend Toni instructing Rufus on some game basics and controls, and being met with much resistance from our hero, who in fact, could actually benefit from this kind of refresher course (despite his constant groaning along the lines of “Who needs a tutorial for a point-and-click adventure?!”). This quick scene not only serves as a humorous and unique way of getting newcomers up to speed, but also as a great reintroduction to the wacky world of Deponia and all of its loony inhabitants. 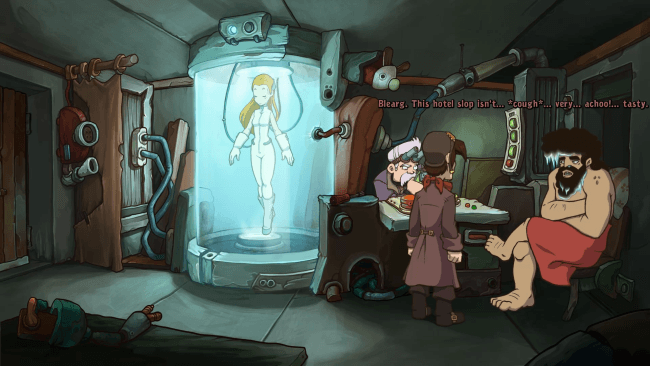 Another early highlight for me occurs when Rufus has to rescue Goal from a wildly spinning machine part (of which, as you might have guessed already, she ended up clinging to for dear life as a direct result of Rufus and his actions). As Rufus watches Goal spin around and around, a crazed super fan of the Deponia series manages to sneak his way into the scene, snapping photos and asking Rufus how he ingeniously plans to get out of this pickle. As Rufus, you’re able to interact with this super fan and ask him questions about things that already happened in the first two games. And needless to say, having Rufus recount his own heroics in this pompous manner is eye-wateringly hysterical. Of course, it won’t give you a play-by-play blowback of the first two games, but it still offers just enough clues so that you’re not completely lost in the story so far.

However, in watching Rufus continuously speeding up the throttle and putting Goal at greater risk in this same scene, rather than just slowing it down like any logical person would, players will get their first glimpse of the biggest flaw in Goodbye Deponia: the extremely unbalanced use of “adventure game logic” that permeates every chapter in the game. While it’s true that there’s no one else out there who can formulate solutions quite like our friend Rufus here, some of the actual answers to the puzzles in the game simply make no sense at all. Gathering items and talking to people are easy enough, but combining items and knowing where to use them becomes another story entirely. Unless, of course, you’re the type of person who thinks to use a rough roll of toilet paper on a large coin to shave it down in size, or to add coffee dust, toothpaste, and a urinal cake to a perfectly good pie before serving it to your pal Bozo. 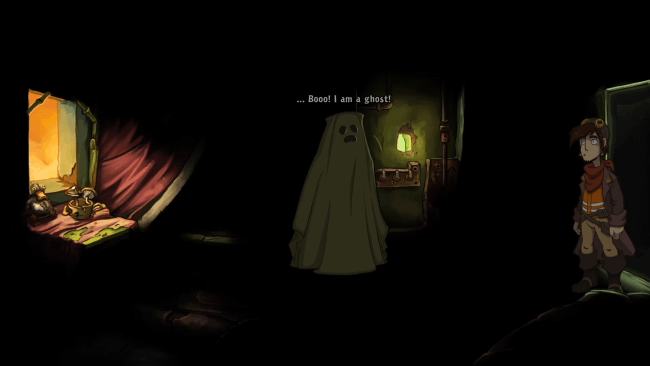 Different motives for what the other in-game characters might want or ultimately need from Rufus are not always so clear, and it won’t be long before you’re forced to shift over to a “try everything on everything” mindset or scour the web for a walkthrough. Subtle hints can usually be surmised from the various dialogue trees, but they’ll still be a far cry from what the ultimate and roundabout solution to the puzzle will actually be. This only escalates later on in the game, when Rufus manages to successfully clone himself so he can solve three giant problems at once, and then you’ve got three different Rufuses to look after at once (luckily, the ease of the game controls and a slick inventory menu that’s controlled by spinning your mouse wheel makes things a little less painful). The three Rufuses were a big selling point for Goodbye Deponia in the days before its release, but the implementation of the mechanic still falls a bit flat in its actual execution.

The ending itself will be a bit polarizing to some fans of the Deponia series, but overall, Goodbye Deponia still ultimately achieves what it originally set out to do, and it serves as the perfect sendoff for Rufus and that trash-covered world he’s always been longing to escape. But even so, the total experience is more about the actual journey than what happens at the end, and so if you’re able to get through some of the heavy adventure game logic that aims to slow your progress at every turn, then what you’ll find underneath is a wonderfully visualized narrative, with plenty of humor and imagination throughout. And so with that, I’d just like to be the one to say goodbye, Deponia: we’re going to miss you.