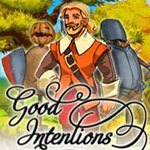 Good Intentions is poorly designed, with some poor ideas and game-breaking issues.

When we hear stories of the Musketeers, they tell of exciting battles against evil villains, keeping the righteous people safe, all for one and one for all, that sort of thing. We don’t usually hear about the tedious back-tracking jobs these royal soldiers had to put up with, and the awful Simon Says style button pressing needed to complete the most menial of tasks.

As it turns out, there is a reason for this – and platformer Good Intentions is the proof. The name is quite ironic, as you can really feel that the developer believed in its ideas and wanted to provide a unique gaming experience, yet the end product is rather dull and technically broken in a number of areas.

The story follows Marc Lacroix, a blacksmith whose house is burnt down and whose family is abducted by an evil organization. With the help of his neighbour Quentin (who is also the narrator of the story), Lacroix sets out to find the culprits and save his wife and child. Along the way he stumbles upon a conspiracy against the king, and decides to become one of the musketeers.

Good Intentions plays out as a side-scrolling platform game, with enemies to lunge your sword at and side quests to complete along the way. As side quests are completed, a series of meters at the bottom of the screen fill up to show your progress, and you are awarded with different ranks based on how good of a hero you are.

Initially, completing side quests is interesting enough – rescue some sheep, climb up onto a roof, etc – but rather quickly a special gameplay mechanic rears its ugly head. If you’ve played the Simon Says electronic game, you’ll know exactly what is happening here. Four coloured buttons appear on the screen in the arrow key directions, and your task is to press each as it lights up.

This little minigame is eventually used for everything. Need to fill in as the guitarist for a band? Play Simon Says. Helping a blacksmith forge some gold coins? Play Simon Says. It’s quite possibly the most tedious minigame ever conceived, so to be asked to play it multiple times on each level is quite the chore.

Eventually we found ourselves purposely skipping as many side quests as we possibly could, just so that we wouldn’t have to play this minigame. Yet even then there are some unavoidable Simon Says moments, and we’d let out a huge sigh every time one of these popped up.

The platforming itself doesn’t feel great either. Collision detection is poor, and when precise jumps are introduced later on, we spent a fair amount of time falling down holes over and over again. Fortunately the game provides a fair number of checkpoints so you’re never taken too far back, but this doesn’t make the action any less irritating.

We also encountered a good few game-breaking bugs while playing Good Intentions. One in particular saw us fall off a ledge to our death, but also activate a Simon Says minigame as we fell, confusing the game to the point at which it spurted out a Critical Error window and crashed the game. Finding problems like this can really put a huge downer on play.

Despite its best intentions, Good Intentions is boring, broken and not worth a play. Every idea present is awful in some way, and it’s very much a case of ‘back to the drawing board’ for the developer.