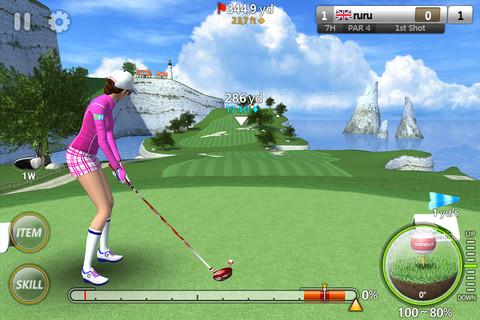 I knew from a pretty early age that I wasn’t meant to be a golfer. Nothing against the sport or anything: I just seemed to be much better at finding all the sand traps and water hazards than getting holes in one. But now I may have finally found a way to enjoy the game without all of that constant walking around to retrieve my ball, as GolfStar by Com2uS is the closest I’ll ever come to playing a real live game of golf right from my living room sofa.

GolfStar is currently being touted on the game’s iTunes description page as “The most realistic golf game of all time,” and I might have to wholeheartedly agree with that statement. Simply put, the graphics in this game are absolutely astounding for a mobile release: from character designs and environmental textures, right down to the smooth animations when your ball bounces onto the green. I also appreciated the small attention to detail, like the stands of onlookers observing each game or the housing structures and vehicles that play a part in each dynamic background.

As far as the gameplay is concerned, GolfStar doesn’t try to do anything drastically different from the overarching genre of golf games, but that age-old “tap and release” control scheme that lets you build up the power of your shots works just as well here as anywhere else I’ve ever seen.

The amount of content here that’s packed into GolfStar is pretty amazing. You can buy different colored golf balls, tons of fancy and prestigious golfing uniforms for your avatar to wear, and of course, clubs, clubs, and more clubs!

The main single-player Career Mode offers a number of challenges spread across several locations in the United States, and over 4 different tournaments based on your character’s skill sets: Beginner, Junior, Amateur, and Semi-Professional. Each level also offers a number of bonus objectives for you to complete and gain the most stars, like achieving par in a 3-hole round, or mastering 3 “nice shots” in a single game. You can also unlock the game’s several multiplayer modes like 1-on-1 matches, Friend Invite Match, and 10-Player Match by earning experience points and leveling up your character to different skill tiers; although as you’ll see in a minute, given the game’s unreliable servers, I’m not sure how much fun these multiplayer bouts would even be if you actually managed to get into a game.

GolfStar is easily the most polished game of its kind right now, but that’s not to say there aren’t a number of noticeable kinks that take you right out of the immersive experience. For instance, before setting up most of your shots, you will see these little text-icons pop up on the screen, that indicate which areas are the “Rough” or the “Green” so you can plan your shot accordingly. The problem with this is that these icons never go away, even after you’ve taken the shot, and can severely interrupt your overall perspective. On more than one occasion after hitting my ball onto the green, the camera would zoom in on the “Green” icon to the point where it covered the entire screen, and I couldn’t even see how my ball was rolling beyond it. Why these icons do not automatically disappear as your ball nears them is simply beyond me. What’s the point of having hyper-realistic graphics is you’re going to completely obscure them on every hole?

At odds with GolfStar‘s beautiful graphics and smooth touchscreen golfing gameplay is a clunky and cluttered interface, which is made all the more worse by the game’s serious connection issues. In order to even play the game, you need to be connected to the internet on your device at all times. It took me around 30 minutes of exiting and entering the game to try and reconnect with the Com2uS servers before I was finally taken to the character customization screen to get started. The entire time that I was playing, the game would suffer from constant hang-ups, which threw me into jarring loading screens in the middle of matches, or forced me to quit out of the app entirely and try to reconnect again. The game also constantly threatened that if I did not sign up for an account on the Com2uS website, there was no promises that my progress in the tournaments would actually be saved. Granted, it’s not as frustrating as slogging through sand traps to retrieve your ball every five minutes in a real game of golf, but it definitely falls into the same category of annoyance.

Even though GolfStar still has some “ironing” out to do in the design department (get it? iron?), it sure is nice to look at, and when you actually get to play it, the core gameplay mechanics are smoother than any mobile golf game you’ve ever played before. So I don’t know if I’ll ever make it out on the real live putting green again anytime soon, but for the time being, I think GolfStar is going to make a pretty nice alternative to going outdoors, and I am perfectly okay with that.