Home / Reviews / Golf Blitz Review – Hole in one or not even par?

Golf Blitz Review – Hole in one or not even par? 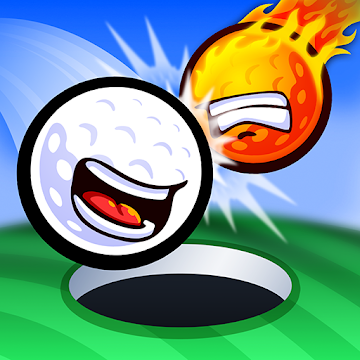 Decent collection of golfers and outfits

Doesn't reward skill so much as speed

The idea seems solid enough on paper. You participate in zany golf matches with three other competitors in real time, with the person who manages to sink the ball first the highest number of times crowned the winner.

Throw in powerups that you can unlock by opening card packs and use on the fly with a rechargeable energy system and you’ve got yourself a multiplayer winner, right? Well, not quite.

You see, golf isn’t really about speed. That’s a mistake that Happy Gilmore made for all of us back in the ’90s. Golf is about patience, accuracy, and physics, and Golf Blitz doesn’t care about any of those things.

Golf Blitz is the Happy Gilmore of Golf Games

Instead, it’s a fast and frantic experience in which it makes the most sense to just hit the ball as hard as you can, as soon as you can, and keep doing so until you’ve putt. Rinse and repeat, using powerups whenever you have the energy to do so.

So a strategic sport that rewards the thinkers amongst us becomes more like Happy Gilmore’s version of the sport, which takes a lot of the strategy out of it. We’re not saying that accuracy and patience aren’t rewarded here, they’re just far less important.

While it would have proved to be a less hectic experience, we’d have much preferred it if players took it in turns to take their shot, with the winner being the player that makes, or beats, par. Because, well, that’s how golf works.

The problem is, that would largely take the powerups out of the equation, as most of them are designed around the fast-paced nature of the game. So Noodlecake’s insistence on forcing the Clash Royale monetisation system onto Super Stickman Golf has quite literally had a negative effect on the gameplay.

It’s also painfully obvious that those who pay will have a huge advantage here too. Your powerups grow in power as you open more packs, so it’s only natural that the player who’s opened the most packs and has the most powerful powerups will be unstoppable.

Because ultimately, speed is all that matters in Golf Blitz. Get the ball to the hole as quickly as possible and you’ve won the game. That’s not really our definition of golf, or sport.

Overall, Golf Blitz is a failure of design. In trying to make golf a faster-paced, frantic multiplayer game, Noodlecake has lost sight of what golf is really about.

It doesn’t help that the monetisation system has affected the gameplay, thanks to powerups that encourage you to play fast and hard, instead of patient and accurate.

Tales of Wind (Laplace M) Review – Was it Worth the Global Release?