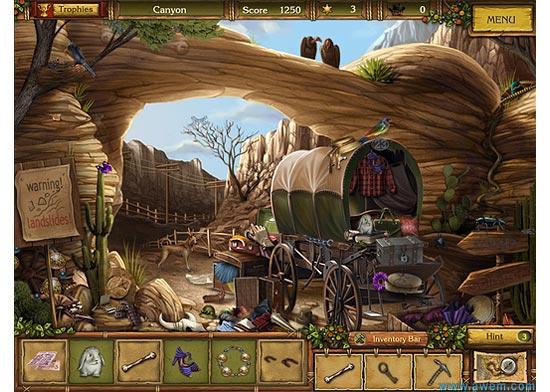 Strap on your sixgun and polish your badge, sheriff -there’s been a bank robbery in Somerville, and that ain’t the only thing that’s a-goin’ on in hidden object game Golden Trails: The New Western Rush. Some gold’s gone missing, Cowboy Joe’s been cheated out of his ranch, a gunrunner’s selling arms to the local tribes, and a young girl’s being strongarmed into a marriage she doesn’t want. Who knew the Old West was so dramatic?

Although there’s plenty of intrigue to be found in Golden Trails, your main interest is the bank robbery, and your investigation will take you to several different towns and locations. Each location includes several different areas to search, such as the local saloon, town square, and hotel. You’ll also meet up with local residents and suspects, though your interaction with them is pretty minimal and confined to brief snippets of conversation at the beginning of the hidden object sequence. You can click through the dialog very quickly or skip it altogether if you don’t really care about who did what to whom.

For the hidden object levels, you’ll be provided with a collection of images representing the items on your list. As you locate an object, its icon will disappear and be replaced by the next thing needing to be found. Items with a canvas-colored background are inventory items and frequently need a bit of extra to find. Running your cursor over the scene will reveal two kinds of highlights: yellow, which means you can interact with the area to reveal an item; and blue, which means you’ll have to use an inventory item to find what’s hidden there. Inventory items disappear from your toolbar once they’ve been used, so you’ll be finding plenty throughout the course of the game. You may not be able to finish a location until you find the appropriate inventory object from somewhere else, but the game lets you know when that’s the case and the backtracking is kept to a minimum.

If item searching was all Golden Trails had to offer, it would still be an excellent game, but it has a bunch more under its ten-gallon hat. Sheriff’s badges are hidden throughout the game; find 150 of them and you’ll unlock the game’s Unlimited Play mode. Many of the badges will be earned in the shooting gallery minigame that takes place between levels. Shoot as many bandits as you can in a minute – each one will net you another star.

As long as you’re in the mood to shoot bandits, be ready for them to sneak into the hidden object scenes, too. Shoot them before they duck back out, and you’ll earn yourself a hint and advance towards earning one of the game’s many, many Trophies. Each trophy you net gains you more points, which is always good, but the skill-related ones, such as clearing levels without using a hint or getting a certain number of items in under a minute, encourage you to try a little harder as you play. 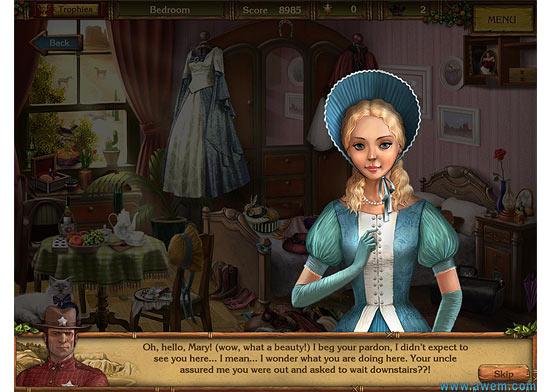 Scattered amongst the hidden object scenes are stolen items that you’ll score points for finding. The stolen goods sparkle when you run your cursor over them, so careful perusal of a scene should pay off. The items aren’t always what you’d expect, either – track down the runaway pig if you can find him. The points are good for unlocking the Secret Mission, which is not only necessary for earning a few of the game’s Trophies, but also for getting to the bottom of that missing gold.

Golden Trails: The New Western Rush has so much going for it that you won’t really mind that its story doesn’t make that much sense, that the sheriff’s investigation seems a bit haphazard, or that the voice acting is pretty universally terrible. There are a few language flubs, too, such as lines of dialog missing words, and a few typos here and there. The item searches are all image-based, though, so it never gets in the way of the gameplay. Just stay focused on finding the objects and collecting the trophies, and you’ll be just fine.