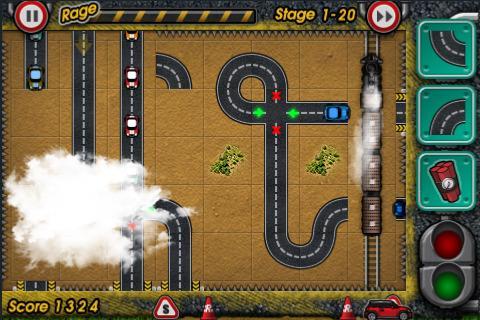 One of my favorite genres on the iPhone has been what I like to call “crisis management” games. Games like Fare City or Airport Mania where 4 things are going on at once and fast, decisive action is the only way to survive. They’re like puzzle games with the tension factor ratcheted way up. GO!GO!GO! in theory definitely fits the bill.

In GO!GO!GO! your job is to build roadways for cars to travel safely from one side of the screen to the other. The screen is laid out in a grid and you’ll be using tiles made up of different curved and straight roads in addition to intersections to create your safe passageways. Speed is the name of the game since cars start driving on your partially made roads right away, and if they spend too long a failure meter fills up and you need to start the level over.

The entrances and exits are random for each map, so just laying out a bunch of straight lines is pretty much out of the question, not to mention that you score more points depending on how long the roads are. You’re given two choices of tile at any time that are displayed on the right hand side and you simple tap it and then tap where you want it on the grid to place it.

It’s a solid idea for a game and seems like something that would be right up my alley. If it were designed well I think this would definitely be something I’d want to play. Sadly however, one major design flaw left me so frustrated that I needed to walk away from the game more than once before wanting to throw my iPod across the room.

Only having two tiles to work with at one time sounds like a decent way to limit your choices and force you to think on your feet, but what ends up happening is that you end up needing to dump piece after piece after piece onto the board somewhere just waiting for the one you need to come up. Sometimes I had the screen filled with junk pieces just waiting for the one I needed. 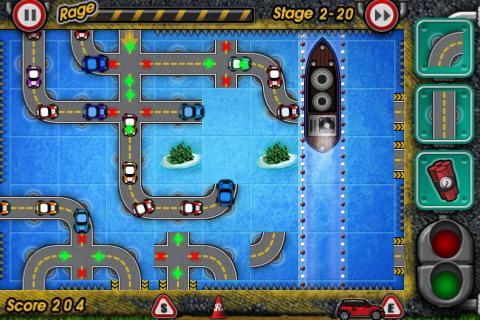 So you’re one piece away from finishing your 12 tile roadway and it’s just a crapshoot on when you’ll get that piece you need. After not getting the one I needed, I would even try to go back and clear space to reroute roads only to find that it’d still be a lucky chance to get the pieces I needed when I needed them most. In addition to the luck of the draw on the pieces the cars start driving as soon as the round starts, so that fail meter fills while the cars wait for you to dump garbage pieces. So unlike in a game like Tetris where you can manage different pieces while waiting for one to set up a big score, in GO!GO!GO! there’s nowhere to put those pieces down and have them be functional later.

If that fail meter didn’t fill so quickly, giving you time to set the pieces the way you wanted them, then I’d be much kinder to the game. But there’s something so frustrating about losing a level not because you did something wrong but because the game gave you 10 wrong tiles before giving you one you could use. There’s no way around the junk except going through the motions of dumping on the game grid, thus destroying it.

I feel like somewhere down deep there’s a good game in GO!GO!GO!, but the mind numbing frustration I experienced watching my well laid plans fail over and over because of being stuck with useless tiles while cars honked mercilessly at me left me mad, not wanting to come back for more. Thanks to this one simple poor design choice, it’s a game I’d never want to play again.