Home / Reviews / Gods Will Be Watching Review – God Help You

Gods Will Be Watching Review – God Help You 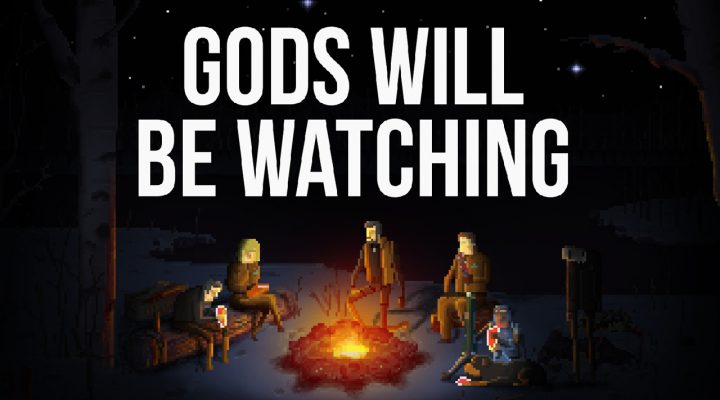 Forces the player to think in ways that games seldom do.

Gameplay feels like a chore after a short time.

Somewhere, deep down inside, you know you think you can handle this game. You think about all your life achievements, all your goals-met and dreams-come-true, and you think, “This game really can’t be that difficult. I can do it. No problem.”

I know you’re thinking this, for I was once like you. I remember those days of innocence. I miss them.

This is Gods Will Be Watching, and it’s going to leave a mark.

Back in 2013, during the 26th Ludum Dare game jam, Gods Will Be Watching was conceived. The game went on to receive enough attention that Deconstructeam promoted an IndieGoGo campaign to facilitate the development of a fully fleshed-out game, based around the Ludum Dare original. The funding campaign was 255% successful, and collected nearly $30,000 from interested gamers. One full year later, Gods Will Be Watching is out.

Deconstructeam labels Gods Will Be Watching as a “minimalistic point-and-click thriller”, but I don’t entirely agree with that description. While the game features minimalistic visuals, the gameplay itself is anything but minimalistic. Gods Will Be Watching strained my critical thinking ability in a way that games seldom do. Each level is an isolated event that requires the player to complete a certain goal (or goals) while consistently managing a continually shifting number of variables.

Gods Will Be Watching forces the player to recognize patterns within every level. Unless you are incredibly lucky, or cheating and using a guide, you’ll end up playing through each level at least a handful of times before you have a chance at successfully completing the objective. However, even the most meticulous pattern-recognition is sometimes not enough. The game throws curve balls at the player that are chance-based events that can just totally screw you over.

Many of the game’s interactive options are based on percentages. Unless the number is sitting at 100, there is the chance that whatever you are trying to do may not work. Which is really, really frustrating – especially when the game punishes you severely regardless of how well you planned.

For example, in the second level the player has to survive being tortured for a set number of days. You can spend time thinking up lies (at the cost of your health) which you can then use to throw the torturers off and satisfy them information-wise for the day. I had my lie success percentage up in the mid 80’s, and my character spouted off some absolutely sarcastic remark that wasn’t even close to being a lie. It pissed my captor off and he shot my head off.

I don’t mind paying for my mistakes, but when I have to redo the entire level from the beginning every time a percentage flops, I get annoyed. Imagine reading a Choose-Your-Own-Adventure book, where every time something happened that shouldn’t have you had to start reading the book over from the beginning.

You would just stop reading the book.

In an effort to expedite my return to where I originally was, I blaze through the text banter (which was pretty boring and poorly written to begin with). The game’s levels are strung together so loosely that I realized it was just easier to treat every level like a standalone game than to try and figure out what was going on. After all, Gods Will Be Watching doesn’t really seem to treat the levels any different: during the torture level my partner was killed. When the next level booted up, there’s my partner sitting right next to me alive and well. If there was a time-shift to the past, the game made no mention of it.

I started making decisions based on how fast I could finish the level rather than worrying about being a good leader. By the fourth run-through of the same level, I didn’t care what happened to anyone as long as I got on to the next level. To me, that is Gods Will Be Watching’s ultimate flaw. It turned into a chore for me, just a few levels into the game.

On a lighter note, the music and the game’s ambient soundtracks were by far my favorite part of the game. If there is one thing that I consistently liked about Gods Will Be Watching, it was the audio. It’s just fantastic and really adds to the tone of each level.

Gods Will Be Watching is a tough game to chew. The game’s difficulty will deter most, at least until walkthroughs are readily available, but some players will dig it. I’m just not one of them.