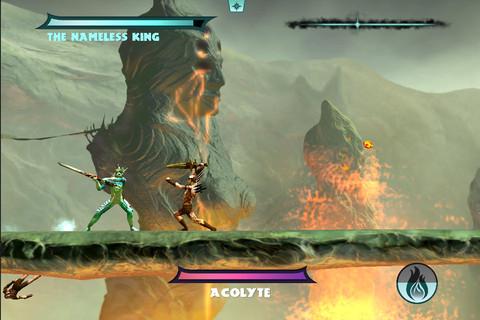 I’ll see your Iron Chef, and raise you my…

In the eternal debate between style and substance, there’s probably never going to be a definitive winner. Sorry GQ. You can have both, though, at least in your iOS action games. White Whale is making sure of that with God of Blades, a super atmospheric side-scroller that will have you hacking up bad guys by the dozens, flashing back to the 70s and possibly even visiting a library for more than just free wi-fi.

As the Nameless King, you are awakened from beyond the pall of death and across the expanse of eternity to take up the sword once again. Those are the game’s words, by the way, not mine, which should clue you in on the kind of mood-setting storytelling that God of Blades has in spades. A man of few words (okay, none), the King charges headlong into the fray and literally can’t stop until his enemies are defeated… or until he is.

Maybe you don’t need a name or any dialogue, though, when you are as handy with a blade as this guy. The first level of Campaign mode gets you fully acquainted with combat, which is accomplished with properly timed swipes. As in Infinity Blade, Nameless King only has a few moves – an upswing, a downswing and a spinning strike, in this case – but they all hurt. He can also parry, an important skill to master when facing tougher foes.

While you can simply slice your way through a lot of the riff-raff, careful timing and a mix of offense and defense are necessary to defeat the bosses, and the game is responsive enough to make the fighting feel fluid. Some cool combo action is possible by using the right moves at the right times, as you can send the weapons or bodies of some bad guys hurtling into their oncoming friends. In any case, not having to worry about moving around allows you to focus strictly on your blade work.

Every sword has its own special power to bail you out of tight spots. You start with the magma-spewing Inferna, but there are a half-dozen that can be unlocked by completing stages in Campaign mode. In keeping with the game’s story, each blade has its own small story attached to it, representing a piece of the Nameless King’s long forgotten memories. Three additional swords can be gained by trying out the Loreseeker feature, which uses foursquare and the location functions of your iPhone or iPad to grant exclusive rewards for playing the game at a library. That’s right kids, the place with all of the books.

With just four zones of anywhere between five and eight stages apiece, the campaign isn’t especially long, but there is some replay value once the full arsenal of swords is at your disposal. For even more blad-swinging goodness, though, the Eternal mode simply throws waves of enemies at you to test how long you can survive. It’s a challenge even after you have a good handle on the fundamentals, particularly once the bosses start coming one after the other.

Even after you’ve checked out all of the content, you still might be drawn to play more God of Blades simply to soak in one of the most creative, fully realized settings you’ll see in a mobile game. Or any game, for that matter. The team at White Whale drew on things like pulp novels, fantasy role-playing adventures and psychedelic rock albums to create the game’s feel, which is novel enough. But the real accomplishment is the way the artwork, music and text all work together seamlessly to make it happen, something you just don’t see too often. The Heart of the Void stages deserve a special shout out for their mind-blowing “lava lamp meets horror movie” motif. 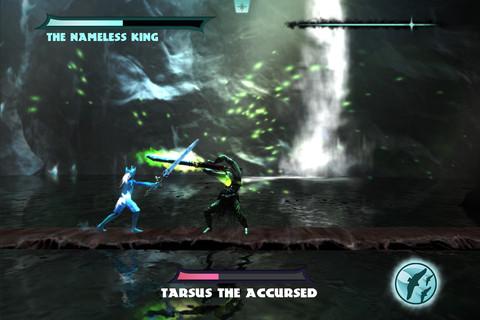 God of Blades is proof that games can be great without needing to reinvent the wheel every time out. It’s simple on the surface but deep where it counts, and you can’t ask for much more out of a mobile game than that.