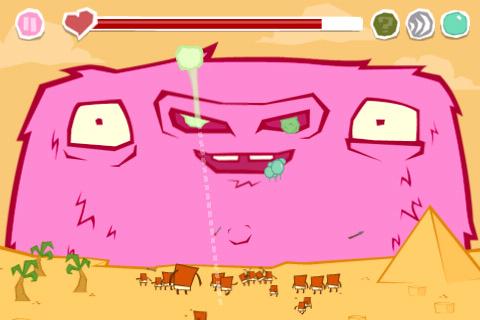 Aaah! It’s a monster out for world domination, consuming everyone in its path! Who is it? Is it Godzilla, with his fiery breath and smashing tail? King Kong, able to scale buildings, smash cars and steal beautiful women? No, it’s Gobtron! And he’s attacking us with… his snot?

An arcade/tower-defense nugget, Gobtron puts you in the shoes (do monsters wear shoes?) of the titular monster as he wreaks havoc throughout history. To defeat the little peons who come to attack you, you’ll be flinging a long, dripping booger around the screen to crush your enemies, or capture special power-ups.

As Gobtron progresses throughout four time periods (caveman, pyramids, World War I and sci-fi future), the little people develop technology to try to defeat him. It starts with bigger cavemen who need repeated booger smashes, then leads to trebuchets and bunkers, then machine guns, and so on. As time progresses, so do the enemies. The curve is admittedly extremely gentle, but it’s still nice to see the difficulty increase organically.

Making things even easier are special power-ups that come in the form of either upgrades or special one-time items you can collect during the waves of attack. Permanent upgrades are acquired by earning DNA (Gobtron‘s money) and are unlocked depending upon how far you’ve progressed. You can earn new attacks like a snot cannon, bubble shield or sonic burp as well as increasing your life bar and stickiness of your snot attack (increasing both strength and size). During the level, watch for birds flying by carrying things like health regeneration, super-sized snot or unlimited booger bombing for a short time.

Needless to say, Gobtron features a bizarre sense of humor. From the amusing dialog of the people to the off-beat tutorial pop-ups, Gobtron is genuinely funny – as long as you’re not grossed out. The last game to feature this level of grossness was a little-known game called Boogerman from the early 90’s. It isn’t a genre that’s well-mined, so it still feels unique and different, albeit a bit squishy/gross.

The graphics and sound are quite good and reflect the sense of humor of the rest of the game. Gobtron himself, in spite of the hanging snot, is absolutely adorable and desperately needs to be turned into a plush toy. The music accompanying each level is catchy, reflecting the time period you’re in. The little people, while not much more than stick figures, are dressed in period outfits and have cute little yelps when crushed by Gobton’s mucous attack. 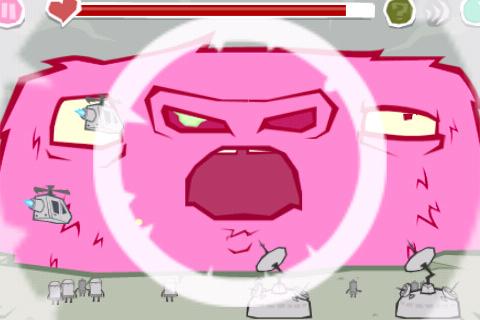 The only thing holding Gobtron back from being a classic is its length and difficulty. Both are on the paltry side. With only 17 levels and generous DNA payouts, you’ll be fully-upgraded and finished Gobtron in not much more than an hour. Once you’re fully upgraded, things get a bit repetitive as you’re fully-equipped to handle anything the game has to throw at you.

As long as you don’t mind the snack-sized portion, Gobtron is a really fun and funny game as long as you have the stomach for it. He may not be a beast of legend, but Gobtron has enough charm and charisma to turn into something more. Let’s hope his next outing is a fuller experience.