Home / Reviews / Goblin Sword Review: Can You Dig It?! 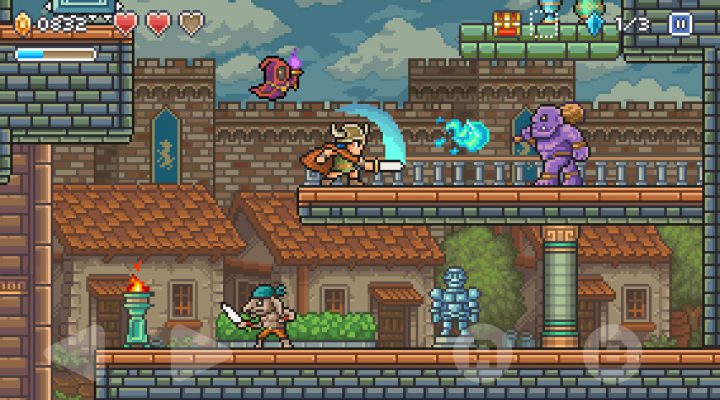 Jack of all trades...

A lot of gameplay to be had for a buck or two with no IAP.

Goblin Sword is a good game. There’s not a lot that’s particularly unique to it, in any special way. I’ve played a lot of games like it – heck, it could be an unreleased Ravenous Games title, in the various things that it does. But Goblin Sword sits firmly in the seat of being good. It’s an entertaining and challenging little game that will please those who think, “hey, I can dig games like this.”

What comprises Goblin Sword’s overall goodness? While there are an endless number of action-platformers with item-buying and a vaguely retro aesthetic, Goblin Sword manages to stand apart because of its solid level design and its difficulty. 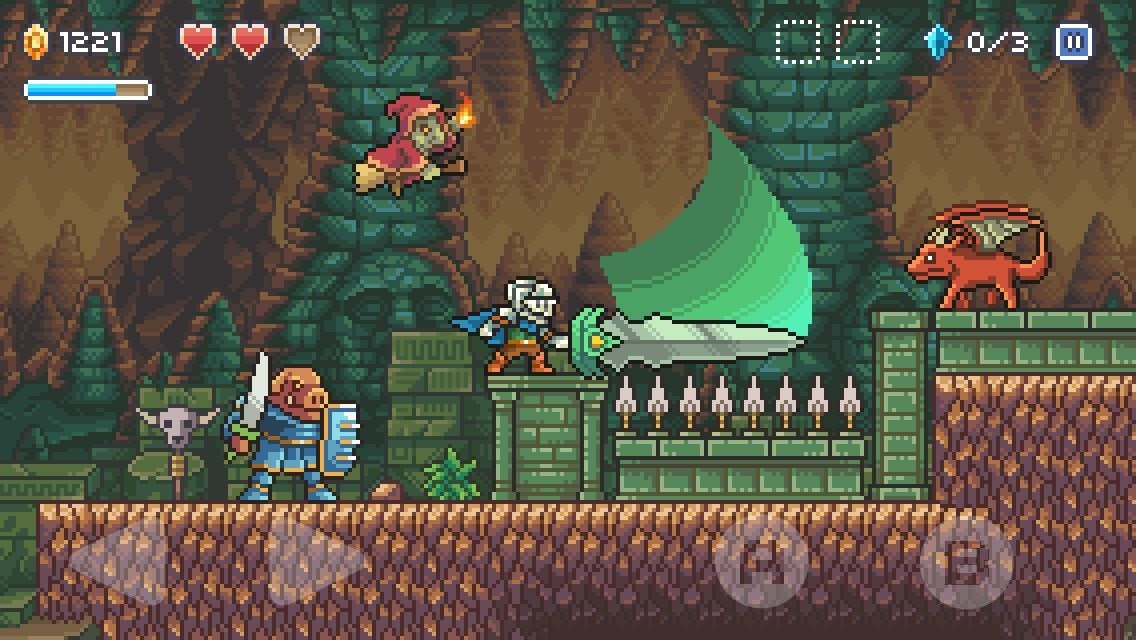 The levels are designed in winding ways such that no level is ever a straightforward affair. They go horizontal, then vertical and back again, and there are plenty of secrets to find. Each level contains two treasure chests, usually hidden behind walls or requiring tricky platforming to reach. It ensures that each level is a test for the intrepid player, and there are definitely rewards for collecting the chests, along with the secret levels that can be unlocked by collecting crystals. The levels are never boring, even if the ‘fake wall’ tactic is common. But I kind of like having to look around levels for what I missed, trying to see if I could truly detect where that fake wall is each time.

But it’s not just the level design that tests the player; it’s the game itself. The limited amount of health proves to be the biggest hindrance, requiring players to be really careful while they play. Each hit could prove deadly at some point, and I like that. This game isn’t afraid to stand up for itself: it’s not just about sitting back and letting the player passively play through the game. This game wants the player to grow some muscle to power through. Success has to be earned through trial and blood! That’s not to say the game is impossibly difficult – it’s just quite firm. 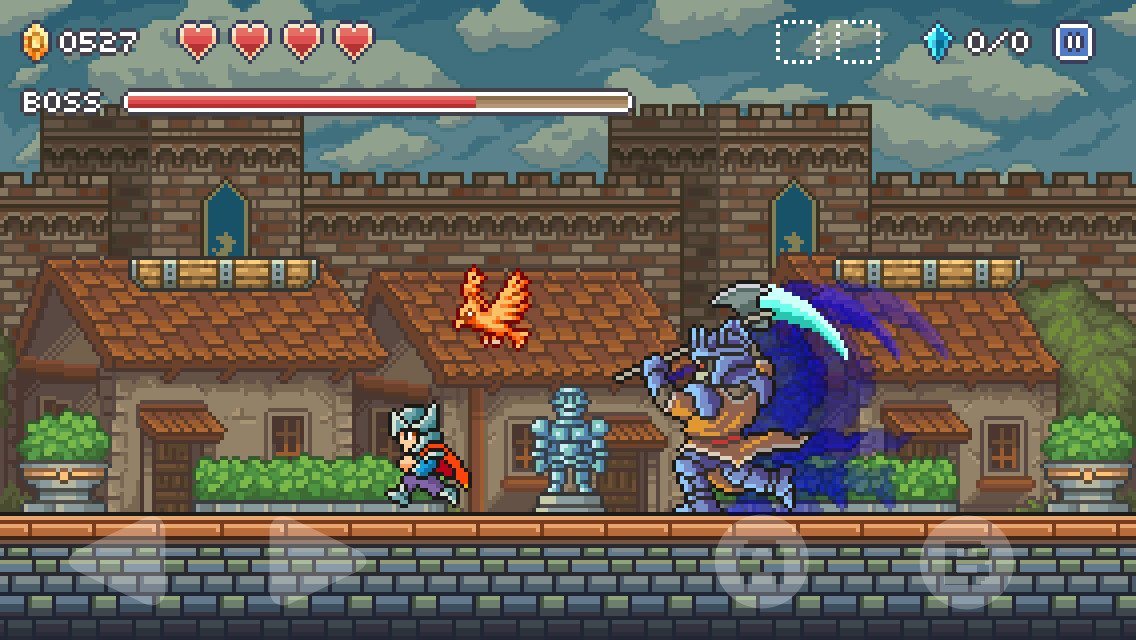 The on-screen controls work without issue, with the directional buttons and two action buttons not putting up much trouble in all the combat and double-jumping that goes on. Two quibbles, though: one, why no MFi gamepad support? The game doesn’t ‘need’ it per se, but old-school action games like this are perfect for it, and I can imagine the intended audience clamoring for it as well.

Second, and this is a minor thing, and one I’ve seen in other games that bothers me every time I see it: why is the attack button, on the left, labeled as “A” and the jump button on the right labeled as “B?” This annoys me to no end. The NES controller pretty clearly specified A on the right, B on the left. I know the Xbox (and MFi) standard has A on the bottom and B on the right, but that’s no excuse to do this. And look, I was a Genesis kid growing up, with their A-B-C layout in that order. But unless you have three buttons, developers, you label your buttons with A on the right and B on the left. Doing otherwise just feels wrong. I don’t want to hear any excuses. The NES won. Use its layout. Doing otherwise is heresy.

The pixel art in Goblin Sword is quite solid: it uses a ton of colors, and there’s great detail, especially in the backgrounds. It’s not my favorite brand of pixel art ever, but I can dig it. 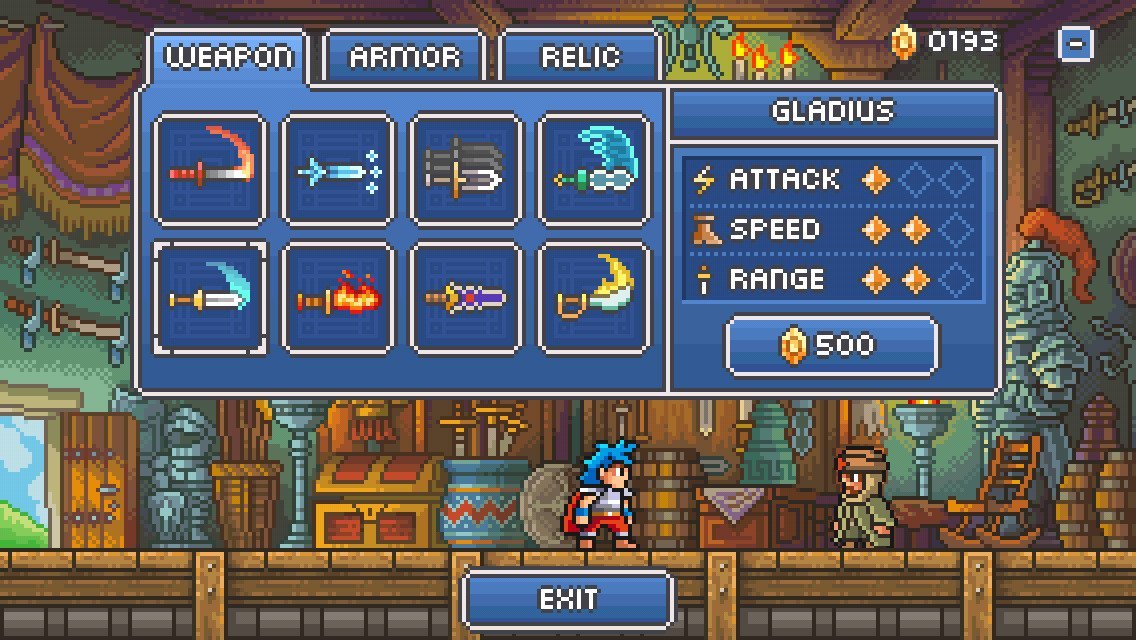 There’s a coins system for buying new armor, swords, and relics, but there’s no IAP. Coins are earned often enough that after saving for a few levels, that handy sword or relic can be had. Each sword has a different magic effect to go along with its stats, and the relics help influence the game. Not all the items can be bought – some have to be discovered, which, hey, I can dig.

Really, I think my ultimate opinion on Goblin Sword is that while it’s not my favorite game ever, it’s definitely something that I can dig. It’s a good game with a lot of good aspects to it that will satisfy those who are satisfied by this type of game. And that’s a good thing.