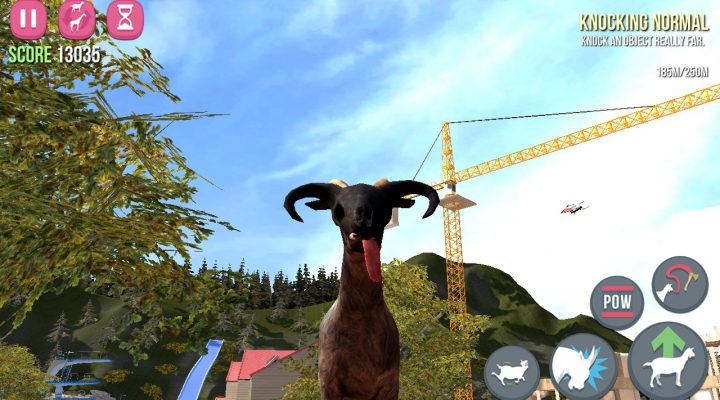 Not much to the game beyond a handful of achievements.

To clear something up straightaway: Goat Simulator is not a simulator. Apart from walking on four hooves, nothing you do in this game is a simulation of how a goat behaves in nature. As a goat in Goat Simulator you will strap a jetpack to your back and launch yourself into the skies above a little town. You’ll use your tongue to drag objects, even people, around. You’ll pick yourself up off the ground after being hit head-on by a car. If you’re lucky you’ll even become the Queen of the Goats, but only if you can figure out how.

That’s the trick to Goat Simulator, by the way: you have to figure everything out. There is no tutorial, players just spawn in a goat pen with a few other goats and the game gives you a handful of buttons for abilities like jump and head butt. What you do from there is entirely up to you, and most everything you do from that point on gets you points.

Besides acquiring points for the sake of having points, Goat Simulator includes a handful of achievements that serve to give players a small bit of direction.

I have to give credit to Coffee Stain Studios: they are totally upfront about the state of the game, and the experience players can expect to get out of it. On their website, right below the Dead Island parody trailer of a goat falling out of a broken window in reversed slow-motion, Coffee Stain Studios states, “Goat Simulator is a small, broken and stupid game. It was made in a couple of weeks so don’t expect a game in the size and scope of GTA with goats. In fact, you’re better off not expecting anything at all actually. To be completely honest, it would be best if you’d spend your $10 [$5 on mobile] on a hula hoop, a pile of bricks, or maybe a real-life goat.”

While Goat Simulator is certainly more entertaining than a pile of bricks (and totally not the most broken mobile game I have played in recent months), it still had its visible flaws. A handful of the in-game achievements (particularly those that involved knocking objects certain distances) simply don’t register correctly. Sometimes after conducting a few explosive experiments the results would catapult me through the bottom of the map, leaving me endlessly falling until the game realized I was in an area I wasn’t supposed to be in and reset me back to the default spawn position, with the entire map reset.

Speaking of the entire map, once I went through the full map, which took about an hour, there really wasn’t much left for me to do. There are trophies hidden in the level, but I didn’t see any real reason to track them all down. I had unlocked all the skins for the goat (some of which morphed me into a giraffe, ostrich, penguin, and a Spider-Man goat), and playing around with the physics wasn’t really that fun to begin with since the game chugged a bit when anything larger than a person fell over.

Overall, Goat Simulator is a weird little achievement-hunt sandbox game that I got a solid hour of enjoyment out of. Is it worth $5? For most players, I’d say no. There are plenty of other games that are cheaper, or free, that can deliver a much more polished and rewarding experience. But if you’re in the market for a game that is absurd in every way imaginable, you can’t go wrong with Goat Simulator.

Plunder Pirates Review: These Be Fine But Familiar Waters