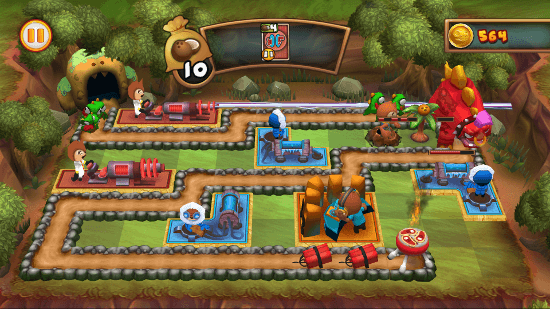 Go Home Dinosaurs is a cute little game that channels a serious Plants vs. Zombies vibe into a more conventional tower defense setting. It doesn’t have quite the refinement of its world-famous predecessor, but its blend of simple gameplay and family-friendly styling make it worth some attention, especially if you’re after some light digital entertainment for your kids that doesn’t take itself too seriously.

So you’re a gopher, and you’ve invited a bunch of your gopher buddies over for a barbecue. Good times – until the dinosaurs show up! They’re like, “Hey! Give us your food!” but you’re like, “No way!” and then they go, “Look, we’re not asking,” and then you’re all, “You wanna make this into a thing?” and they go, “Yup,” and then it is on! That’s actually a fairly accurate rendition of the game’s opening, and it gives you an idea of what’s in store: hip burrowing rodents, goonish prehistoric reptiles and a not-terribly-serious clash between the forces of light and darkness over some fine, charbroiled steaks.

The truth, however, is that the dinosaurs aren’t very good exemplars of evil. Most of them don’t seem entirely unpleasant and appear more hungry than malevolent, kind of like that crazy uncle who sets everyone on edge at family reunions – not a bad guy, just rude and a bit thick. Even Todd Rex, who acts like kind of a jerk as he goes crashing toward the grill, is just lashing out because he’s sensitive about his tiny arms. Like all tower defense games, different dinosaurs bring different qualities to the party; some are fast and delicate, some are ponderous and tough, and you’ll square off against a few boss dinos who are like Sherman tanks with horns and bad attitudes.

But the gophers have a few tricks up their sleeves too. The most basic unit pops out of the ground to shoot rocks at enemies as they pass by, but more advanced defenders fire large laser beams, slow enemies with ice machines, zap them with area-of-effect electric shocks, blast them with loud music and more. And in an unusual twist on the genre, you actually lead the defense personally as the one mobile gopher on the field, throwing rocks at dinosaurs and collecting the coconuts needed to place defenses on the field.

Go Home Dinosaurs serves up cute, cartoonish creatures, a light, catchy soundtrack and a nice attention to detail: gophers dress up like scientists or soldiers as appropriate (the “Tesla Zapper” is powered by a heavily-caffeinated gopher running in a hamster wheel) and they’ll occasionally utter lines lifted from movies and games, like, “This is my stump. There are many like it, but this one is mine.” The dinosaurs are far less eloquent, expressing themselves with angry growls or vaguely crazy laughter, but even so, and despite being the bad guys (or perhaps because of it), they’re clearly the stars of the show; rather like the bad piggies from Angry Birds, their shenanigans are forgivable because they’re just so darn cute.

You begin each round by selecting cards that represent the units you can place on the board. Each card represents an individual unit rather than a unit type, so if you want two Stump Gunners, you’ll need to pick two Stump Gunner cards, which obviously mandates some care and consideration in the pre-game planning. New types of cards are acquired as you play and can also be purchased in the “Dino Store,” along with single-user power-ups and even new outfits for your gopher. (It’s not a real-money store, so there’s no need to fret about your kids ringing up Smurfberry-sized charges on your credit card.) The “game board” is divided up into a grid and each defender occupies a number of squares in a specific, rather Tetris-like pattern, which determines what defenses you can place and where you can place them. This creates another strategic variable, as the playing surface is relatively small and strictly limits the number and even type of defenses you can place – at times, you simply won’t be able to use certain units. 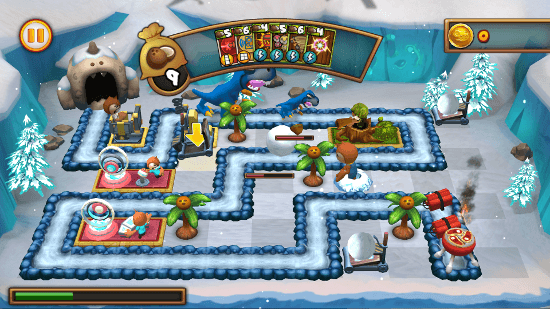 Defenders also require coconuts in order to be deployed (I don’t know what the connection between gophers and coconuts is, but it fits the generally silly nature of the game), which your uniquely mobile avatar will have to scurry around the board to collect. Each level has a predetermined number of palm trees on which the coconuts grow so your supply is arbitrarily limited, but that actually suits the game because once the the action begins, Go Home Dinosaurs is fast and furious. Rounds are generally over in just a couple of minutes and while the special, limited-use cards available in the store allow for different types of “emergency defense” (if you remember to buy them and select them before the round begins), the cramped playing field, small number of units in play and inability to relocate them means “game over” tends to come quickly if you make a bad move.

Everything from the bright, colorful graphics and simplified tower defense gameplay to the cute dinosaur names, cascades of gold coins that must be scooped up by frenetically mousing over them and the relative non-violence of the whole thing – if you lose, your opponents eat your lunch, not your brain – make it obvious that Go Home Dinosaurs is aimed squarely at younger gamers. That’s not to say that there isn’t anything here for adults to enjoy, but it’s a fairly shallow game, and while 60 levels sounds like a lot, I get the impression – not having finished it, mind – that it could be wrapped up without too much trouble in a single afternoon. That very likely places it outside the interest of most serious tower defense fans – but for serious tower defense fans with small kids, Go Home Dinosaurs may well be ideal.