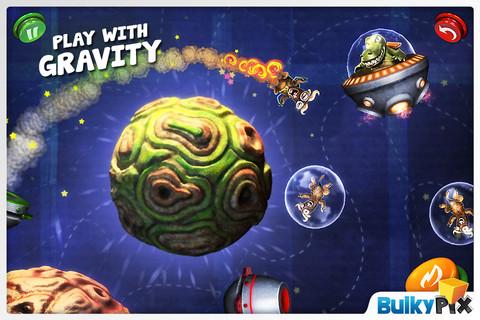 Gnu Revenge brings nothing “gnu” to the genre

Gnu Revenge is either a blatant copycat, or has the extreme misfortune of following the exact gameplay mechanic from one of the fastest selling apps of all time. Either way, Bulkypix’s new physics puzzler contains the same gravity-centric gameplay gimmick as Rovio’s Angry Birds Space, but isn’t nearly as fun to play.

Like any Angry Birds clone, Gnu Revenge follows a plot that involves evil animal A (in this case the crocodiles) stealing the kin of good animal B (enter the gnu). With the help of an unlikely contraption (a jetpack to replace the slingshot), our hero must fly through the air and knock the assailant to their demise. It might not be the most original plot ever conceived, but the crazed jetpack gnu and his surrounding environments are colorful enough to remain charming.

The one admittedly unique mechanic in the mix is the fact that jetpack throttle is controlled throughout the entire level with the press of a button, and your launch direction is predetermined in each stage. The challenge becomes knowing the right times to accelerate in order to succeed, rather than bothering with specific angles. Each of the game’s 72 puzzles involves the same formula: collect up to three of your bubbled gnu companions, and smash into the crocodile spaceship to succeed.

As mentioned, gravity becomes the central mechanic to completing most stages. Outer space is filled with tiny Super Mario Galaxy-style (or more appropriately, Angry Birds-style) planetoids, each with its own circular gravitational field. As your rocket propelled wildebeest reaches these fields, your flight pattern will curve. Some stages require you to stagger your thrusters in order to remain in circular orbit, while others require you accelerate fast enough to break through gravity itself.

While the gravity mechanic itself might not be viewed as original in the iOS marketplace any longer, Gnu Revenge still has a diverse bag of tricks up its sleeve to keep things interesting. Some stages require travel through multiple fields, allowing for multiple twists and turns. Others bring classic physics puzzle elements into play, such as barrel cannons, portals, and boosters. While many early stages seem to mimic each other in execution, the multiple tools later in keep things interesting.

The biggest barrier in reaching these later stages is the gameplay itself. While the jetpack mechanic controls fine, multiple stages require a very specific input in order to succeed. Because the gravitational field for each planetoid is so small, orbits are hard to enter and easy to leave. One tap too much on the throttle will send you into the deep confines of space, while one tap too little will allow gravity to grab your gnu and drag him to his fiery demise.

It’s not uncommon to require dozens of attempts to pass a single level, even if your only goal is to succeed without saving any of your bubbled companions. Once stages incorporate multiple gravity fields, asteroids, and obstacles, success can feel impossible. The best physics games have puzzles that leave the players blaming themselves for their failure. Gnu Revenge, on the other hand, left us blaming the poor level design. Many levels allowed for such a small margin for error that we simply had to stop in frustration. 70 stages isn’t all too many given this genre, but the high difficulty left the experience feeling much longer than it should have been.

In an alternate dimension, Gnu Revenge might have been a great app. It’s crazy variety and antics might have been considered fun, and the gravity mechanic might have been praised as original. Unfortunately, it co-exists in a world where physics puzzlers are among some of the best-selling games of all time. When you aim to go toe-to-toe with Angry Birds Space, your presentation needs to be flawless, and Gnu Revenge‘s awkward design and difficulty keep it far from that. It’s definitely not a terrible app, but it’s simply been done before, and done better.