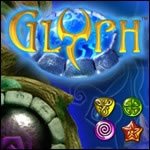 Defined as symbols with meaning, “glyphs” have long since been a popular topic of study, whether it’s the Egyptian hieroglyph writing system or Western astrological glyphs, such as the pitchfork for Neptune or the circle shooting the arrow for Mars.

But for our purposes, Glyph is a new puzzle diversion that challenges gamers to unveil ancient glyphs carved into stone. While the familiar game-play isn’t as mysterious as its epic subject matter, Glyph proves to be a relaxing and attractive virtual getaway.

Glyph is a cinch to learn. Simply click on three or more same-colored stones to remove them from the board. Doing so causes the sand underneath to break apart and new stones fall onto the board to take its place. The bigger the match, the more sand is destroyed underneath, revealing a hidden glyph. The level is complete only once the entire layer covering the stone has been destroyed.

The goal of the game is to restore balance to the world by uncovering and reassembling all of the elements — Wood, Fire, Water, Metal and Aether – each one represented by unique backgrounds and other related graphics. In the main Quest mode, the player will click through 255 increasingly challenging levels.

To keep the game fresh, the developers at Sandlot Games introduce new stone layout patterns for each level, new colors every few levels or so, and obstacles begin to appear, such as stones that cannot be removed so easily or broken stones that aren’t powerful enough to dig through the dirt when cleared.

Even more important to the game, however, are the 14 different kinds of Artifacts. Think of them as power-ups you can use to perform a special move to help clear the screen to reveal the glyph underneath. Examples include: Flash Bombs that destroy surrounding stones; Stone Sorters that shake around all the stones until they regroup by color; Chroma Bombs that remove all stones of one color; and Destructive Artifacts that clears paths vertically, horizontally or in four directions at once – but doesn’t break through the dirt underneath.

Each of the Artifacts enjoy three power levels – small, medium and max – which reflects how much power you’ve charged up by clearing stones. The more you clear, the more powerful the charge when the Artifact is used.

Every five levels, the gamer is presented with Simon Says-like bonus levels that asks you to repeat the pattern played out on various glyphs.

Finally, Glyph also offers a time-based Action mode, with a rectangular screen layout that resembles other games of this kind (such as PopCap’s Big Money); stones pop up from the bottom and you must click to destroy three or more adjoining stones of the same color. Artifacts appear on the board at some point throughout the level.

While not too original in its game design, Glyph is a fun and easy-to-learn puzzler that’s ideal for casual players in search of a relaxing time-waster. And the glyph theme works, supported by attractive ancient graphics, nature sound effects and soothing new age music.