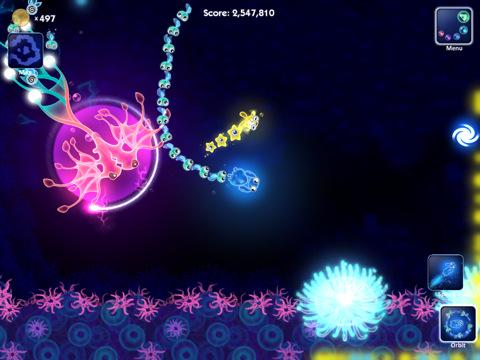 When the iPad launched, it was called a “magical” device. Sure it does an awful lot of cool stuff, and there are a lot of great games now for it, but a truly magical app that compliments the iPad? Those are few and far between. Glowfish, from MumboJumbo games, sprinkles an ample helping of magic around your iOS experience.

Glowfish doesn’t have a great plot (evil sea urchin kidnaps your girlfriend, you have to go rescue her and your friends he’s also taken), but what plot there is gets presented with cool storyboards that permit a pseudo-3D effect by tilting the iPad around. The best part, though, is this isn’t ever explicitly pointed out. You just have to discover this for yourself. 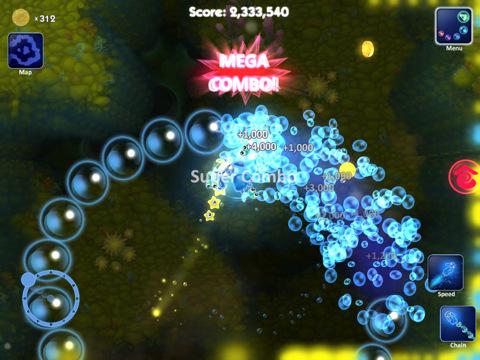 And outside of explaining the basic mechanics, Glowfish is all about discovery and exploration. As you swim around, you gather little glowing friends. They trail behind you and can orbit your character as you swim to attack. The more friends you have, the larger the enemy you can ram to free another friend.

If the baddie is just too big, you can have your friends trail again behind you at the touch of a button. By swimming around an enemy in a circle, you create a bubble attack that can help shrink a tough enemy down to size, collecting the friend inside. Once you drop the friends off in a safe-house, the next portion of the level opens up. Dive into the whirlpool at the end of the level, and you’ll move on.

Some enemies are undefeatable, like jellyfish. Other ones require special abilities to defeat (more on this in a moment) or need to be shaken off by wiggling. The larger boss-like encounters require a bit more strategy too. There’s a surprising amount of depth to be found in Glowfish.

As you explore each area, the map gradually reveals where you’ve explored. Later levels become quite labyrinthine, so it becomes a very welcome exploration tool. All levels feature at least one secret area (some have several) that adds to your score, star grade at the end of the level or perhaps some extra coins.

These coins are used to upgrade the eight super chums you’ll encounter throughout Glowfish. Each adds a new weapon to your arsenal, like blasting an enemy with bubbles. Without spoiling anything, you’ll need each one for the final battle, giving Glowfish a surprising full-game arc as opposed to feeling like a series of individual levels stitched together.

Controlling Glowfish is a pleasure. By default, the game offers an on-screen analog stick that appears wherever you touch on the screen – great for both right and left handed gamers. Not only this, but the control response is very tight. Some passages require some pretty tight maneuvering. You’ll never have a single control issue here. The attack buttons are also completely moveable, so there’s no complaints about poor control layout when you can set it all yourself. Being someone with large hands, this was most welcome. 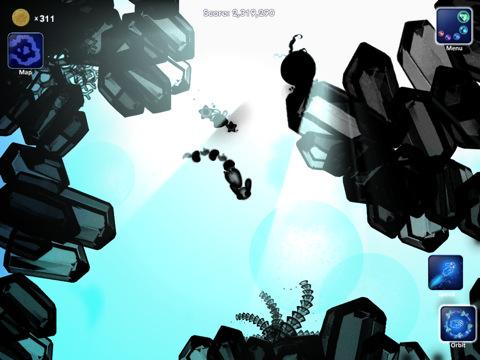 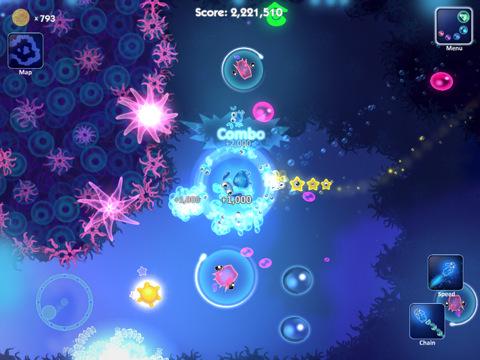 Glowfish is without a doubt one of the most beautiful games on the iPad. The glowing of the fish is dynamic, lighting and darkening as you pass through the deepest oceans. The level of detail in each level is astounding. You’ll see a large octopus looming in the background, eyes following your every move. The glowing light of an angler fish is hypnotic, until the fish fades in from the background, menacing and ready to chomp. The environments are as beautiful as those who populate it. Swimming in an area with lots of sunlight backlights the action, having whole areas played as silhouette. There’s tons of variety and it’s all amazingly beautiful. The sound, smooth and hypnotic, provides a perfect accompaniment to the game.

The best part is there is a lot of game to play. Glowfish features 50 levels of fish-finding fun. With secret areas galore and four-star ratings to achieve, there’s enough reason to come back to levels you’ve already beaten. But the main reason you’ll come back is for those “oh wow!” moments – and there are many, many of those in Glowfish. Even 100 levels wouldn’t be enough, especially given the dynamic gameplay and multiple, upgradeable characters.

Glowfish is aquatic exploration nirvana. It’s got absolutely everything going for it. It plays like a dream, looks and sounds like a dream, and fills you with a real sense of wonder. There’s no other word for the whole package other than “magical.” Glowfish is a must have for every single iPad owner.