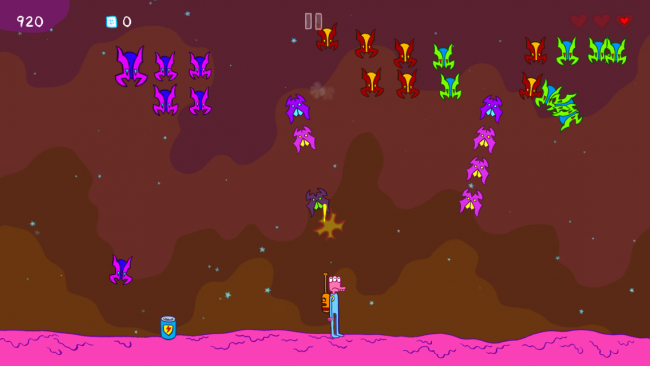 Like most 30-somethings with a love for video games, I have fond memories of the days when arcades reigned supreme. And when I was a kid playing games at my local pizzeria (it sounds clichéd, but it’s true!), I put an embarrassing number of quarters in the ol’ Galaga machine.

My story, I have to assume, is not unique. If I were to speculate, I’d say that Miles Tilmann (aka Pixeljam) and James Kochalka would have very similar stories to tell. After all, they teamed up to make Glorkian Warrior: Trials of Glork — a game that loves Galaga just as much as I do.

Like Galaga, players of Glorkian Warrior control a character at the bottom of the screen that navigates back and forth to shoot hordes of enemies above. Instead of a spaceship, though, you’ll be playing as the titular Glorkian Warrior – a three-eyed alien dweeb with little self-confidence and a heavily weaponized backpack.

Those enemies will move in patterns reminiscent of the aforementioned arcade classic, and many even share a similarly bug-like appearance, helping seal the deal for fans of the original like myself. Make no mistake – what’s at the base of Glorkian Warrior is straight-up homage.

On top of that base, though, there’s plenty to give Glorkian Warrior its own sense of identity. For one thing, your character will need to run and jump back and forth across the screen – not being a ship, his only mode of transportation involves two feet and a heartbeat. For another, you’ll be collecting a variety of weapons as you play, each unique enough to help keep the play experience varied. 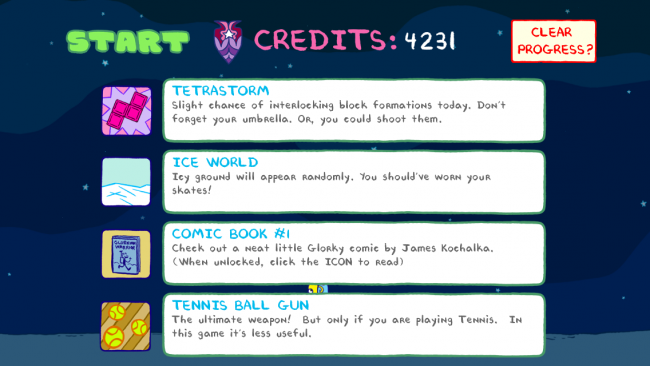 The real secret to what makes Glorkian Warrior so addictive, though, is a mechanic that’s much newer than anything Galaga had to compete with back in the day: an endless series of things to unlock. And we’re not talking “hats,” either. The unlockables in Glorkian Warrior are things that actually have substance.

During the course of play your warrior will collect crackers, which – once you reach a certain cumulative total – will unlock new weapons, stages, and goodies that will further tweak the Glorkian experience. After I had reached a certain number crackers, for example, I unlocked “tetrastorm.” Now, every so often, I’ll have to survive a stage where Tetris pieces rain down from the sky. Similarly awesome things, like a tennis-ball gun that uses bouncy physics to redirect my fired shots or basketballs that I can kick at the enemy forces, are all unlocked when more crackers are collected.

As you probably expect if you’re familiar with the works of Pixeljam or James Kochalka, this is also a game that’s simply dripping with quirky indie charm. The art, the humor – the chorus of children that announce your weapons in an 80’s edutainment television tone – it’s got that perfect “this is what I love about indie gaming” feel. 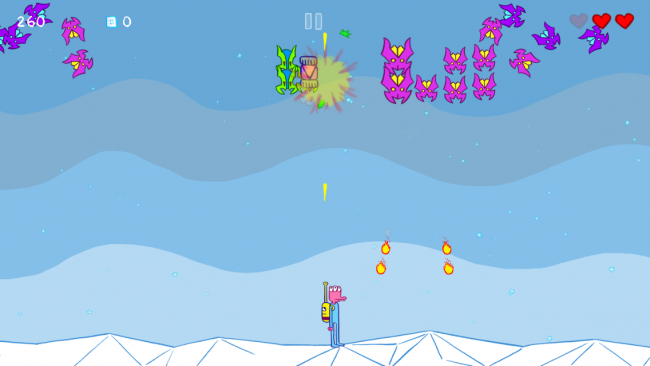 The only complaint to be had about Glorkian Warrior – and it’s actually kind of a big one – is that I don’t feel as in control of the jumping as I should. This wouldn’t be a problem if there weren’t the occasional ground-based baddies that you needed to jump over (or, preferably, on), but since there are… it’s kind of a big problem. You can solve this by switching to a d-pad and on-screen jump button, but it’s not nearly as comfortable as the alternative, so you’re losing something in the trade off.

Still, that one complaint aside, Glorkian Warrior is everything that my inner ­Galaga­-fanboy could have ever wanted. It’s stylish, it’s funny, it’s challenging, and it’s damned near impossible to put down. If you’re a fan of the arcade classic, don’t hesitate on this purchase for a second.