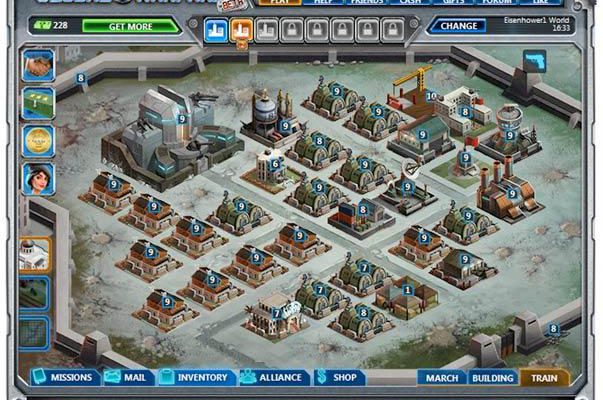 Global Warfare is a truly social strategy game, though it feels a little too familiar at times

Few developers have embraced the challenge of attracting “hardcore” gamers to Facebook quite like Kabam, and now it is once again attempting to court the Starcraft and Command & Conquer crowd with Global Warfare. While Global Warfare doesn’t feel terribly different from the studio’s earlier outings, its higher emphasis on multiplayer coordination and player versus player combat mark a bold new direction in Kabam’s crusade to make Facebook a hardcore platform. But is it enough?

It’s hard to say. There’s not much of a story here aside from a general post-apocalyptic introduction; instead, you’re simply assigned the task of rebuilding a firebombed husk of a city for the sake of preparing for yet more warfare. You then have six days in which to build new buildings, research new technologies, and upgrade your fledgling metropolis into something that can both defend itself and produce a formidable army. And once your six days are up, you’re free to go out and conquer the poor saps that didn’t spend as much time preparing their cities as they should have. And other players are free to do the same to you. 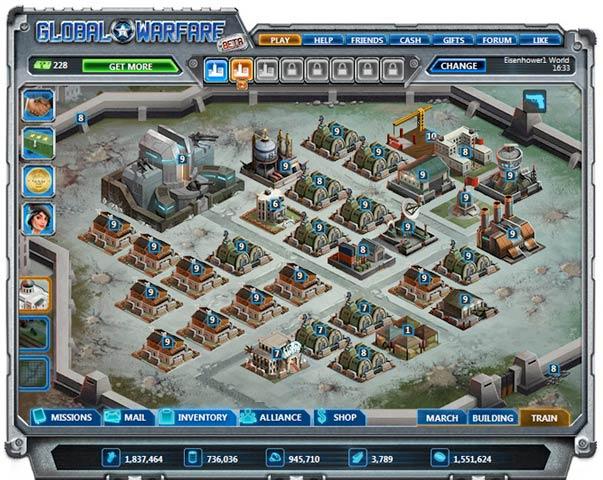 Needless to say, it’s dangerous to go alone. This has always been the case with Kabam’s MMO-style social games (which even let you chat with other players through a real-time interface), but Global Warfare places a particular emphasis on joining and participating in an alliance. Since alliances are fairly similar to guilds in more traditional MMOs, it only makes sense that one of Global Warfare‘s bright points is the chance to take parts in “raids” of sorts. In these instances, you can either defend another player with reinforcements or tackle resource objectives that can only be captured with a large group of friends. It’s a welcome addition, and one that gives Global Warfare an edge over Kabam’s previous attempts.

If only you really had to fight to capture these adjectives. While the group-based system certainly allows more opportunities for player-versus-player combat (and you should expect a swift annihilation if you play alone), combat itself amounts to simply selecting a general and a number of troops and seeing how it goes. In other words, you shouldn’t expect any YouTube-worthy feats of strategy or real-time views of your army crushing the fields and cities of your opponents. It’s a bit of a harsh criticism considering the technology, but it’s one that likely to keep away some of the very players Kabam hopes to attract. 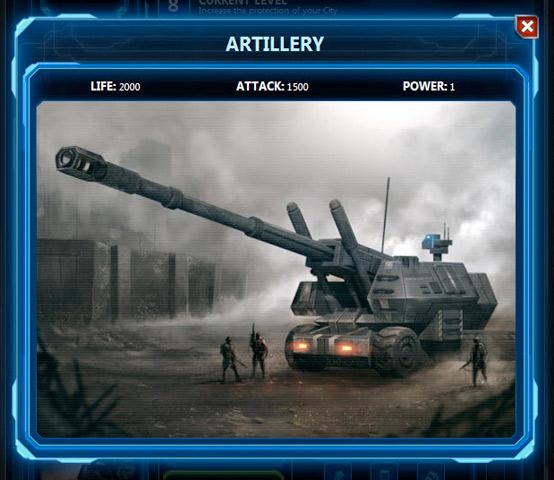 And then there are the bugs. Global Warfare is still rightly listed as a beta, and on one occasion we logged back in after a day’s absence to find almost a week’s worth of leveling completely reset. Not only did we lose the items we’d obtained and our advanced cities, but we even lost our connections to our alliances. Other bugs lock up the game indefinitely if you send or receive gifts and still others prevent you for appointing generals. Kabam is sure to weed these issues out in the coming weeks, but these persistent flaws mean that you might want to wait a while before making any microtransactions.

There’s no question that Global Warfare is a good social game at its core, but fans of Kabam’s earlier titles may find it feels a little too similar to the studio’s previous outings. The introduction of some light crafting elements and some tweaks to combat balancing add some variety, however, and the post-apocalyptic setting is sure to attract potential fans who might be weary of ancient or fantasy settings. And while it’s not likely to attract the bulk of the hardcore crowd owing to a lack of real-time battles with genuine visual strategy, Global Warfare once again establishes Kabam as one of the “serious” studios to watch.