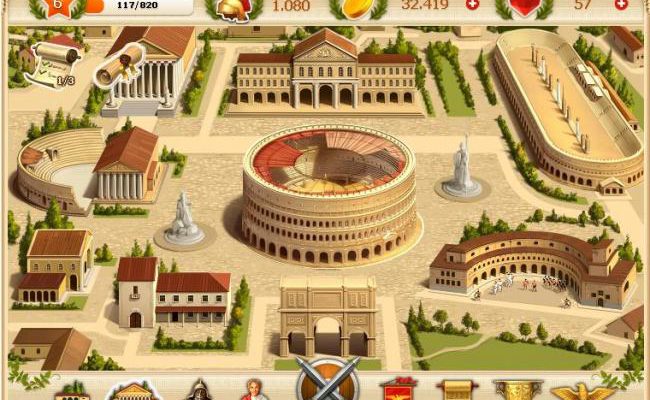 If you think about it, managing a team of gladiators is a lot like coaching a sports team. Well, except for the fact that the gladiators have no choice but to compete. Oh, and if they lose, they might die. Other than that it’s pretty similar, which is what you’ll learn while playing Nekki’s Gladiators, a free-to-play Facebook game that makes you the man (or woman) behind the men with the swords and shields.

Your introduction to the world of Gladiators comes from Marc Cornelius, who isn’t Don’s brother, and is kind of a condescending jerk. Despite that, he’ll teach you in fully voice acted style all about the basics of building up your camp of warriors – purchased from the slave market, naturally – and sending them into the arena to win you fame and fortune. 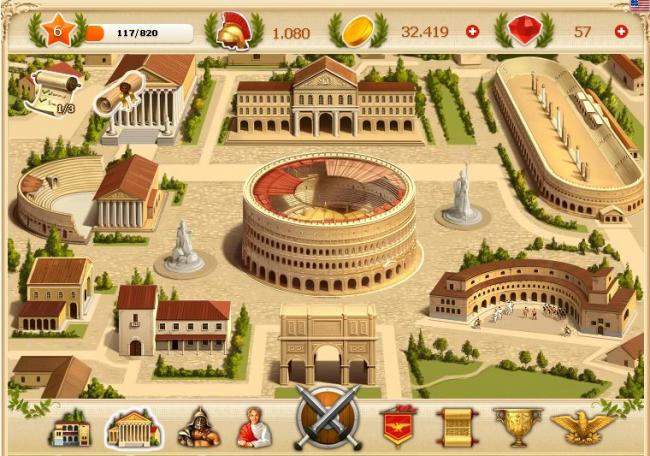 The builder aspect of the game is similar to that of other Facebook games too numerous to list. You spend the soft currency (denarii) to create structures that help you in various ways. There’s a School for training, a Bathhouse for recovery, a Marketplace to earn revenue, a Temple for increasing fighter morale and a Doctor for curing wounds. One thing you’ll notice is that each building can only be used a certain number of times before being replenished by a very long timer, which is an unfortunate recurring theme in this game.

With some buildings in place, you can head to the city to purchase your first few combatants. The pool of potential gladiators is refreshed once per day, and you can see how all of them stack up in age, talent and other attributes like dexterity and strength before plopping down some denarii to have them join your team. There are several different types of fighters with different combinations of weapons, but the tutorial only does a cursory job of explaining their relative merits.

The action in the arena also isn’t fully fleshed out for you. Each battle requires you to send one or more of your gladiators to take on an equivalent number of opposing warriors. Going back to the coach analogy, you don’t actually control the action but simply watch it unfold. There’s some strategy involved since you can choose to give each gladiator specific instructions in three different areas: defense versus attack, speed versus power and dodge versus block. Yet since you don’t know what kinds of opponents you’ll be facing until the fight starts, you’re basically guessing as to which tactics might prove most effective. 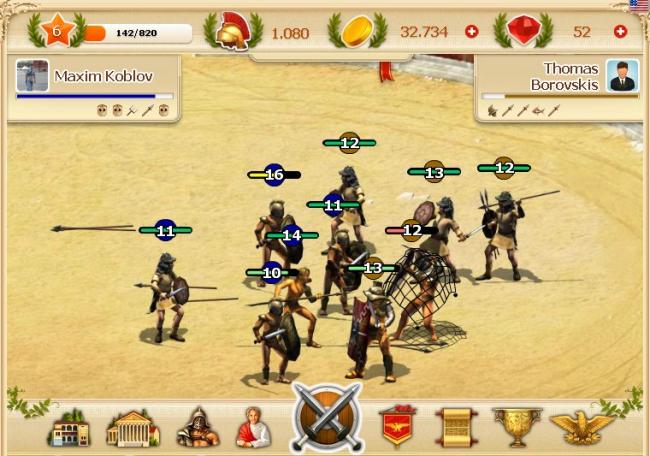 That wouldn’t be so bad if the fights were more fun to watch. The graphics in Gladiators look just fine standing still, but the animation isn’t at the same level. The warriors look stiff while fighting it out, and they have a depressingly low number of moves at their disposal. It’s kind of cool to see ten guys hacking and slashing away at once, but the one-on-one battles aren’t nearly as much fun as they could be.

The meat of the arena combat takes place in the Tournament mode, which has you traveling from venue to venue to face increasingly difficult foes, apparently getting embroiled in some intrigue along the way. There’s a Training mode as well that allows you to play against one of your Facebook friends, though it’s mostly a devious way to get you to invite them to try the game.

Winning battles gets you denarii and Fame, which is the main measuring stick used to compare your prowess against that of other players. Leaderboards are active, but support for guilds and a few other features out in the city screen are all listed as ‘Coming Soon.’ Leveling up your leader unlocks more buildings and features, while doing the same for the gladiators introduces some light RPG touches by permitting you to choose a few attributes to improve.

Rubies are the premium currency, and the game isn’t shy about attempting to entice you to spend them on things – like, say, speeding up those accursed timers that prevent you from playing too much in one session.  It’s a game mechanic that some social games have evolved beyond and others have learned to hide better. But this one? Not so much.

Gladiators has an interesting enough premise and is competently assembled in most areas, it’s just got too many unpolished, unexplained or unfinished bits to really thrill the masses.