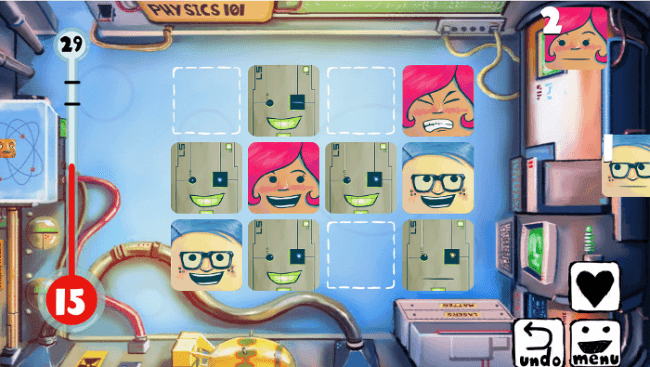 But do the robots reciprocate?

Girls Like Robots. And nerds like girls. Robots hate pie. June likes bugs. Got it? Hope so, because in this simple yet challenging and surprisingly addictive logic game, it’s up to you to keep everybody happy, and that means you have to keep it all straight.

In Girls Like Robots, no space is wasted during field trips, dances, athletic events and other such exciting endeavors, because everything and everyone is a square. Mind you, I don’t mean that in the sense of “unhip.” Every character in the game, even the coolest kid in town, is a perfect square shape, so they line up very nicely in neat rows and columns. And that’s good, because the object of the game is to arrange girls, robots, nerds and more on virtual boards of different sizes and complexities in such a way that everybody (or at least, almost everybody) is happy.

Girls like to sit next to robots, as you may have surmised from the title, but robots can only handle so many girls at once before they start to go crazy. Girls don’t like nerds, alas, but nerds sure like girls, and robots too – but can’t abide each other in close proximity. Fortunately, staying on top of this oddball social scene is actually a pretty straightforward proposition. Characters react immediately to their seating arrangements, so a girl placed next to a robot will instantly smile and squeal with delight, but surround her with nerds and her anger will be unmistakable.

It’s tricky at times, but the real challenge comes in other forms. In some levels only certain squares on the board are accessible when you start, while in others you’ll have to place the pieces — that is, the characters – in a specific order. Sometimes certain characters are already on the board when you begin, forcing you to work around them, and occasionally they’ll even move from one spot to another. Even fire can pose a problem now and then, and nobody likes fire — except pie, as it turns out. Pies don’t mind fire.

Girls Like Robots boasts a bizarre yet undeniably artistic visual style, a sort of faux-watercolor representation of Middle America, complete with starry nights, high-school football games and a volcano, all wrapped up in a down-home bluegrass soundtrack that, I must admit, drove me right around the bend. Fortunately for those who share my aversion to such things, music and sound effects can be toggled off. It’s pretty beefy, too, with more than 100 levels spread out over three acts, plus bonus levels that are unlocked by filling the “Bag of Happy” with clever solutions to seating conundrums. 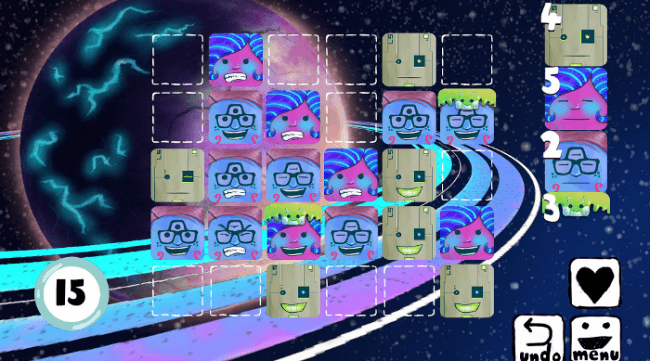 It’s not entirely without flaws. Moves can be undone sequentially if you paint yourself into a corner, but once characters are placed on the board they cannot be moved or even removed out of order, which strikes me as an odd and at times frustrating design choice for a game of this nature. I also found that menu controls such as the “OK” button were often slow to respond, and at one point I ended up stuck on the map screen and had to close the game completely and restart it to get out.

It’s all very silly, and yet no matter how many times I found myself thinking, “This is silly,” I kept on playing until my phone’s low battery warning kicked on. It is silly, and it’s strange, and it’s simple — and the truth is that aside from a couple of technical quibbles (and a bit of sadness, for obvious reasons, that girls don’t like nerds), it’s also really good. If you like puzzles like girls like robots, then you’ll like Girls Like Robots.