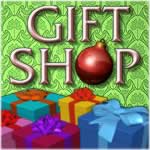 Tis the season to be jolly – so why not ring in the holidays with Gift Shop, a clever retooling of HipSoft’s exciting pattern-matching puzzler Gem Shop themed around Christmas cheer? Gem Shop puts you behind the counter of your own thriving retail store and, amusingly, asks that you please an ever-more demanding lineup of consumers. Essentially just a remake of a fun, simple game to begin with, it’s nonetheless a desktop companion you’ll be all too happy to cozy up alongside this winter.

Here’s how it works.

Each stage consists of a 6×6 grid of colored ornaments situated atop a backdrop of swirling snowflakes and ice-choked city streets. Using the mouse to select an ornament, you’ll click and drag these adjustable rows – capable of shifting vertically or horizontally – to place three or more like-colored ornaments next to one another. (If such a match isn’t made with each turn, ornaments simply slide back into their original position.) Each time you do so, any pieces involved disappear from the board, and higher-situated ornaments fall downward to fill in the gaps, letting you land big combos or multiple matches simultaneously and thereby rack up bigger sales numbers.

Whereas most titles would be content to offer such thrills alone though, Gift Shop throws in additional twists. Broken ornaments appear occasionally, preventing you from manipulating rows they inhabit until eliminated by use in a match. Lumps of coal – which won’t pair with anything and act as universal obstacles – also show up from time to time. But, more importantly, your little retail outlet will be frequented by customers, who appear in the form of Santa hat-wearing smiley faces. And with each passing second you don’t make a match, their happiness meter shrinks, as reflected by expressions which rapidly change from happy to mad.

Naturally, more complex matches and chained combos are required to keep patrons happy on later levels, adding a sense of urgency to the proceedings. Don’t forget however, that you also have a minimum daily sales goal to hit, which, if not met, causes you to lose one of only three total retries you’re afforded. Curiously, collectible gifts – e.g. camcorders, telescopes, big-screen plasma TVs, pinball machines, and deluxe vacations – afford you some control over this dynamic. Unlocked between levels through the use of tokens (earned for finishing stages quicker, and with higher degrees of overall customer satisfaction), each can be sold to customers for a serious profit. But these gifts – earned as fast as you can fill a picture of them that’s slowly colored-in by making matches – sell for different amounts based on the customer’s happiness.

Predictably, the further you go, the crazier the game becomes, especially when playing in the ever-more grueling Expert mode. (Casual options are also available, which give you a lot more breathing room.) There’s this delicate balance you must constantly juggle between making a certain number of matches, doing so as fast as humanly possible and in a manner that pleases each shopper. As much as cute little spirit-lifting treats one can offer buyers such as gingerbread cookies, hot chocolate and gift baskets help, you’ll find yourself constantly under the gun, especially on later scenarios.

While it’s a shame there isn’t more to the title, and that creator HipSoft skimps somewhat on production values, we’re still wholly pleased nonetheless. A soundtrack which includes synthesized renditions of Jingle Bells, the Nutcracker Suite and Deck the Halls, plus backgrounds adorned with colored Christmas lights, can’t help but have you smiling. That play’s so solid is just a bonus – the title’s personality proves absolutely infectious, making it most notable for the gleeful mood it’ll put you in to start with.

That being said, we won’t act like a Scrooge when it comes to review scores. A perfectly handy solution should the Grinch come to visit anytime before, during or after December 25th, Gift Shop will perk you right up and get you back in the proper frame of mind for a little ho-ho-holiday fun.