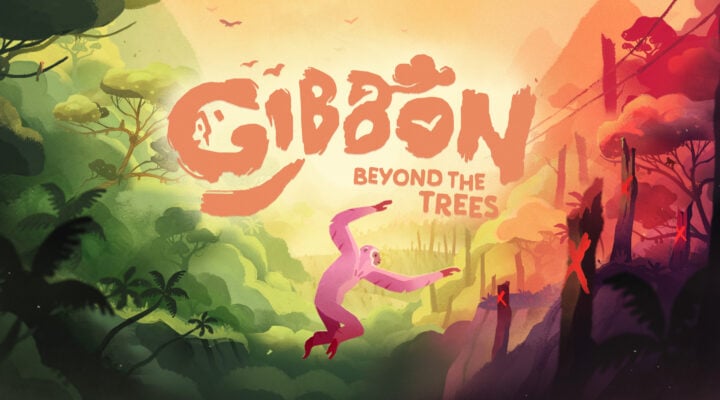 Gibbon: Beyond the Trees is a wonderfully presented title with a great environmental message. But sadly this Switch port is not the best way to experience it.

You play as a mother gibbon who resides in a Southeast Asia forest, swinging with your partner and child through the trees. And human housing, which pollutes the environment more and more as you progress.

Through a set of upsetting circumstances your child is kidnapped, with the majority of the game sending you on a rescue mission to get the little tyke back. The control scheme is simple but intuitive, with one shoulder allowing you to swing through the trees and the other letting you run. Holding down the former helps you to build up more speed, whereas the second slows you down but gives you more control over your momentum – and for you to amble on quickly if you end up on the ground (which is never desirable).

There are small wrinkles – such as the ability to backflip in midair – but that’s it in terms of the core mechanics.

The game sees you always moving forward, making sure you release the shoulder at the right times to make jumps and get to the next tree or obstacle.

When you’re in full flow the game is almost hypnotic, and when things do occasionally slow down – such as in the human heavy segments – the game’s simple but affecting narrative pulls you through. It’s only an hour long but it makes a keenly felt impact in terms of depicting the destruction of the world’s jungles. The ending is perhaps a tad anticlimactic, but perhaps anything more bombastic wouldn’t be in keeping with the game’s subtle tone.

Sadly this Switch port isn’t the best way to play the game – not by a long shot, and that’s not down to the high price-tag either.

No, it’s down to performance issues – with the game often chugging and the frame-rate taking a hit far too often during our time through its brief runtime. It’s unacceptable in a game that relies so much on motion and movement, and will often take you out of what is generally a hugely immersive experience.

Gibbon: Beyond the Trees is a game with a worthwhile message and well thought out mechanics – but we sadly can’t fully recommend this Switch port until the performance issues are ironed out.