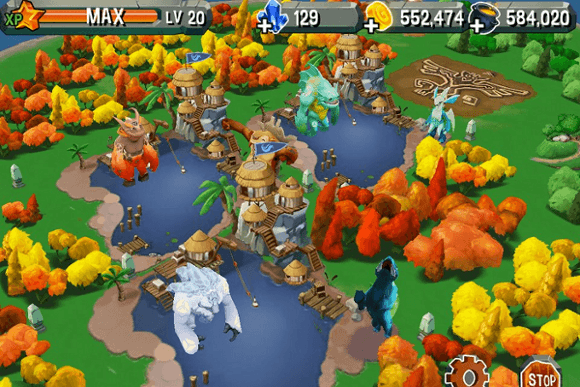 A standard simulation game saved by a glorious art style.

There is a land where the giants still dwell. Now that land is your land to do with as you please. As long as you’re nice, of course! Giant Realms puts you in control of breeding, raising and training giants to inhabit a world you sculpt for them. It’s pretty much your usual freemium game, but the colorful personalities and the fantastic artwork save it from a life of obscurity.

If you’ve played a freemium game like DragonVale or Pirate Explorer you’ll know exactly what to expect from Giant Realms. You start off with a few patches of land and a fistful of coins. Place a terrain type and wait for it to grow, then choose a giant to inhabit the new plot. Don’t have a giant who needs a home? Head over to the breeding ground where you can combine eggs to hatch new and exciting creature types. When a new critter hatches you even get to play a quick mini-game to determine its overall strength!

Helping giants grow takes a lot of resources, most of which are put towards creating brews. Feeding a giant a brew helps him or her level up, which in turn opens up even more breeding and quest possibilities. Spending time discovering new egg combinations is one of the key activities in Giant Realms, and doing that requires completing a ton of game-assigned quests. The left side of the screen holds a menu with a list of tasks you can complete for gold or experience points. Stick closely to it and you won’t find yourself hurting for loot or for exciting new things to explore.

The freemium aspect of Giant Realms comes into play exactly how you would expect, offering two forms of currency to use for purchasing goods or speeding up actions that take place in real time.  Both coins and gems can be obtained through normal play, such as leveling up, clearing parcels of land, breeding new monsters, etc., but you can also dip into in-app purchases to keep them in good supply. Giant Realms “conveniently” offers the most expensive packages at the beginning of the list, forcing you to scroll to find the cheapest items. It’s a bit of a sly move on the developer’s part, but not the biggest crime it could commit. 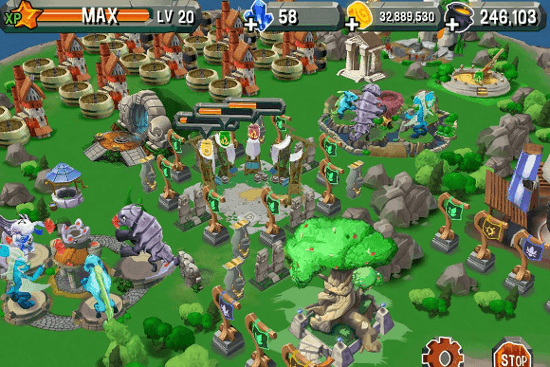 Giant Realms doesn’t deviate much from the freemium model in terms of features, monetization, quests or overall layout. Where it really steps above the competition is in visual presentation. The graphics in the game look fantastic, from the personality-filled giants themselves to every animation and colored polygon on the screen. Having a 3D world to scroll and zoom around is a nice change from the static screens we’ve grown accustomed to. It’s a little awkward at first dealing with the tilted perspective, but it’s something you get used to very quickly and won’t be able to live without afterwards.

What it lacks in innovation Giant Realms makes up for in personality. It leans a little heavily towards encouraging in-app purchases, but not so much so that it forces your hand. There are plenty of secrets to uncover and social features to check out, making it a freemium simulation you’ll keep around for weeks on end.