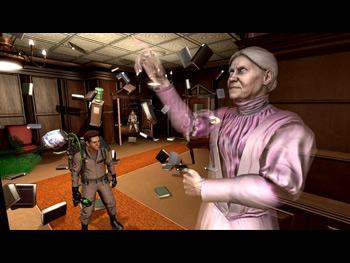 Phantom hauntings and malevolent ghosts are typically explored in grisly horror films and creepier flicks, but the iconic Ghostb

Phantom hauntings and malevolent ghosts are typically explored in grisly horror films and creepier flicks, but the iconic Ghostbusters films of the 1980s put a funny spin on paranormal activity that made the subject more digestible to younger audiences. While games with movie tie-ins seem to have a bad habit of flopping miserably, Ghostbusters – The Video Game is among the first I’ve encountered that really manages to nail down and masterfully emulate everything that’s so great about the films it draws inspiration from.

Instead of being a direct tie-in to one of the two films, Ghostbusters – The Video Game is a completely new ghost busting adventure that was crafted as if it was the third movie in the series. It was written by the first film’s original creators, Dan Akroyd and Harold Ramis, and puts you in the role of a new rookie recently recruited to join the Ghostbusters team in New York City. As the fifth member, you suit up and tag along with the team as they investigate a strange spike in ghostly activity around the city that coincides with a mysterious blast of energy.

The action-focused gameplay follows a third-person, over the shoulder perspective. Armed with a proton pack and other familiar gear from the films, you’ll accompany the Ghostbusters on plot-driven investigations that send you around to many ghostly hotspots around the city.

While there’s an abundance of funny dialogue, high quality cutscenes, and exploration, much of the gameplay itself revolves around blasting ghosts you encounter, wrangling them into traps, and hunting down spectral anomalies. Occasional boss battles and other special events also switch things up a bit, and you’ll encounter many fan-favorite spooks like the Stay Puft Marshmallow Man and Slimer.

A number of cool features really make the experience feel authentic. The game has a powerful physics engine that lets you burn up environments with your proton blasts, knock items over, smash things, and generally tear the scenery apart. It’s a lot of fun to see the crazy damage you’ve inadvertently caused in the process of being a spirit hunting hero. 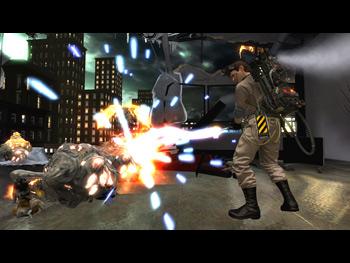 The actual process of trapping ghosts follows the film exactly; you blast them to weaken them, grab onto them with a separate lasso-style beam, and muscle them down into energy traps you’ve thrown out on the floor. Some spooks can be zapped outright, but most require a little effort. Working in tandem with the other team members is a surreal experience, and the attention to these kinds of details in the gameplay makes a huge difference.

Other upgraded gear is earned along the way, including a rad slime sprayer, a spirit freezer, and explosive energy orbs, among other gizmos. There’s also the trusty PKE reader from the film that lets you go into first-person mode to sniff out spectral hiding spots and other paranormal items. These special items are doled out sparingly at regular intervals throughout the adventure, and each one you obtain adds a fresh element to the ghoul capturing process.

Cash you’ve earned for demolishing stuff can also be spent to improve your existing equipment in different ways, like making traps suck down ghosts faster and beefing up the power of your proton pack beams. 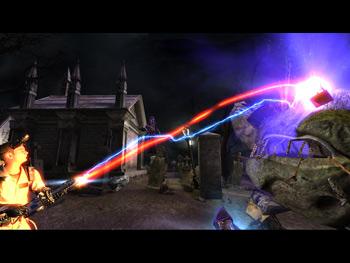 A big part of what makes Ghostbusters: The Video Game so enjoyable is that it feels like it thrusts you into the film universe. All of the in-game versions of the characters from the film look very realistic – almost perfect renditions of their real-world actor counterparts – and the animations are believable and fluid. The environments, ghosts, and even the proton packs and gear are all extremely detailed, though a moderately powerful graphics card is required to experience the game in its full polished glory.

The audio is also top-notch. Main characters are all voiced by the original actors themselves, and the comical puns and funny interactions between characters are incredibly entertaining amidst the chaos of blasting ghosts and ghouls. You’ll also notice music from the original movie sprinkled in throughout the game to provide added atmosphere to the story and presentation.

Simply put: this is a great looking and great sounding game if you have hardware powerful enough to run it at its highest settings. Since the production is on par with modern day consoles, it’s a huge cut above the average casual game download, and it may not run on all computers so readily. That’s really the only drawback.

If the regular difficulty mode is proves too challenging, there’s a casual setting that lets you enjoy the gameplay and the film-like experience without worrying about perishing at the hands of ghosts and having to replay portions. Ghostbusters: The Video Game is funny and highly entertaining game that stays true to the spirit of the films and offers an incredibly polished production.

Ghostbusters fans would be crazy to pass this one up, but even if you’ve never watched the movies, there’s a lot to love about this demonically fun adventure.