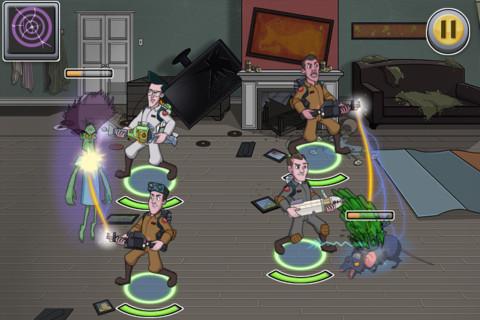 The Ghostbusters are ready to believe you—but they’re going to hand you off to some apprentices, if that’s OK.

If there’s something strange in your neighborhood, it is prudent to call the Ghostbusters. Unlike the rest of the population, they’re ready to believe your story about the demonic Chinese-crested dog living in your fridge. The bizarre events and devilish creatures that define the Ghostbusters movies have made for mixed success on video game platforms across the years. Beeline takes another crack with Ghostbusters for iOS, and the results are fun, if a little predictable and safe.

Ghostbusters begins just as the original four ‘busters are setting up the “Ghostbusters Inc” franchise. Zuul may be gone, but New York City still has a ghost problem, and a single pack of ghost-wranglers just won’t cut it anymore. What’s more, there’s a strikingly evil presence at work in one of NYC’s towers, and chipping away at it is going to take some serious manpower.

Ghostbusters plays a good deal like the popular iOS action/role-playing game Battleheart. You select a bust from a map of the city, then zip over to the problem area in Ecto-1. Each bust encompasses a single screen, but relenting waves of enemies keeps the challenge level high. You can count on seeing everything from re-animated lab rats to ghostly football players.

Up to four Ghostbusters can be controlled at once. Wranglers sap the ghosts’ strength and trap them, while scientists heal the team. Each bust earns you money and “slime,” and the latter is necessary for working your way up the game’s central tower and taking on fearsome bosses. Winning big fights earns you blueprints that can be used to upgrade your equipment.

Ghostbusters is familiar, but it’s fun. The game’s mythology and character design appear to be a welcome mash-up between the movies and The Real Ghostbusters cartoon that aired through the latter half of the ’80s. The writing is also amusing and features plenty of wisecracking from Peter, Ray, Egon, and Winston. Ghostbusters does have a couple of flaws, however, and the most notable one involves the aforementioned fab four: If you want any of the boys to join your ghost-hunting team, it’s going to cost you real-world cash instead of ghostly soft currency. 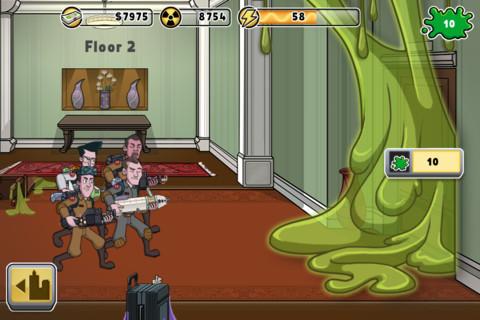 In fact, since Ghostbusters is a free-to-play game, you can expect to run into the usual paywalls. Research on items and upgrades can take a long time, and you need to do quite a bit of grinding to find the sufficient amounts of slime necessary for climbing the game’s main tower.

Otherwise, the Battleheart formula works well for Ghostbusters. There are tons of enemies to take down, and they’re all goofy and just a touch creepy. The game’s events are fun to follow thanks to decent writing, and even Slimer makes an appearance without getting up in anyone’s face with stupid antics. If you ain’t afraid of no ghost, give Ghostbusters a try. Alternatively, you can just fire up your old NES Ghostbusters game. Horrifying!