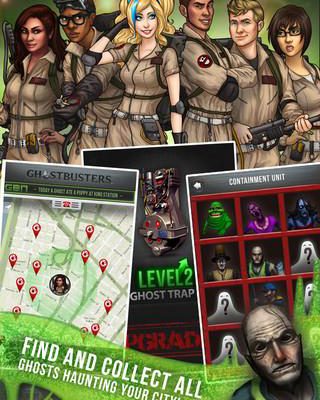 A fun idea, but not much of a blast

If you were able to comprehend media at any time over the 80’s and early 90’s, you probably had an urge at one point to become a Ghostbuster. The ghost-capturing phenomenon spanned two films and an extensive animated television series, and it had everyone wishing for a proton pack of their own. The new Ghostbusters iOS game, Ghostbusters: Paranormal Blast promises to do just that.

Anyone familiar with the tech demo/game “Face Raiders” that comes pre-packaged with the Nintendo 3DS will know exactly how Paranormal Blast works. The game uses a constant display utilizing your iOS device’s external screen, while also employing the accelerometer in order to track and trace ghosts. To your friends, you’ll look like you’re spinning in circles with your device like a fool. On the screen, however, you’ll be fighting paranormal battles.

Unfortunately, the battles themselves are anything but epic. The entirety of your battles are spent rotating around in a single area, holding down a finger on the screen to fire your Neutrino Wand out at a ghost. They’ll gradually lose health as you focus the beam on them, until you finally employ a ghost trap and attempt to hold them into the trap’s entrance for a designated period of time.

While there are fifteen different ghosts to find, such as slimers, spectral librarians, and eyes of doom, every battle plays out the exact same way: keep your fire focused on the ghost to drain their health. They’ll occasionally drain your health with unblockable attacks, making the entire battle a race to outlast your opponent. For a game about battling ghosts, the tasks actually get pretty boring and monotonous. 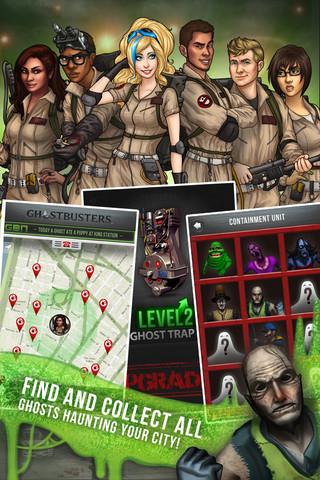 The game uses a map display of your current location to show where you can potentially battle new spectral menaces, and will occasionally require you to scour your neighborhood. However, outside of a few “fight a ghost in a coffee shop” missions, the display is more of a gimmick than an actual addition to gameplay. 95% of your ghostbusting “around town” will take place on a sofa within your own home.

The game uses a familiar system of missions and upgrades, incentivizing you to complete missions to upgrade your gear. Like the gameplay, these missions can get plenty repetitive. “Bust 5 ghosts”, “Bust 5 ghosts in 24 hours”, “Bust 25 ghosts” and “Bust 3 ghosts” were among a majority of the missions I completed. Cash awarded allows you to get better gear, but it never does much to extend gameplay. There are two instant-use items that allow you to freeze ghosts and deal damage, but I never felt compelled to use them. 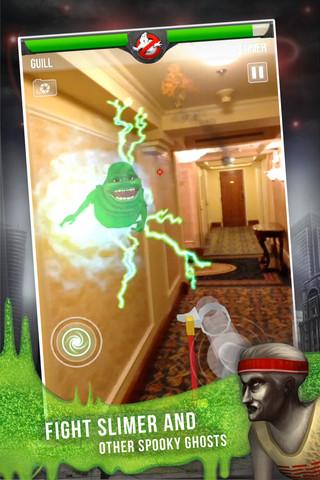 The visuals on the ghosts themselves are solid, but they become instantly warped and pixelated when they move in for close attacks. The Neutrino Wand itself looks a little blocky as well – a shame considering it’s one of the only objects you’ll see for the entirety of gameplay.

Ghostbusters: Paranormal Blast is a quirky little tool, and it’s nice to see more people attempt to utilize the iOS cameras in gameplay, but this is far from the supreme ghost fighting experience that many of us have been waiting for our entire lives. It’s a fun gimmick to show your friends, but the novelty disappears faster than a Slimer in broad daylight.