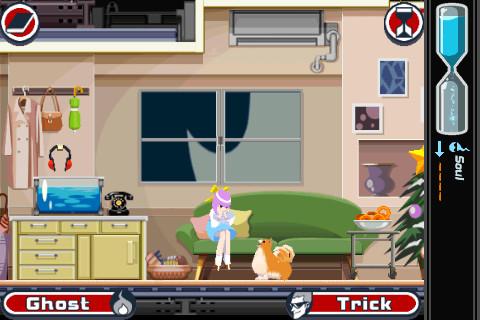 The Incredible Machine …of the dead!

This needs to be said right at the top and I promise I’m not overstating this… the animation in Ghost Trick: Phantom Detective is GORGEOUS. Potentially the best I’ve ever seen in a videogame, let alone on an iOS device. It’s stunning, and though it’s all in cutscenes, every time characters start moving around I can feel my jaw slowly dropping. I could probably fill an entire review with how sharp it looks when it’s in motion, and still not adequately convey how good Ghost Trick: Phantom Detective looks.

The downside to that is much of the game takes place with little or no animation at all. When characters talk they slide in from the side of the screen over the action in stills, sort of like in Phoenix Wright. It’s totally fine and conveys the story to the player well, it’s just that I’d prefer to see more of that animation in the game.

So what is Ghost Trick: Phantom Detective about? Well, you play a dead guy. Not like as a zombie or vampire though. You’re just a dead lying face down dead guy. Of course if that were it, this would be a pretty short game. You’re lucky enough to be able to move your spirit around and inhabit different objects around you. Unfortunately you can only jump very short distances, and this mechanic makes up the lion’s share of the game play.

You can take short bounces from object to object, and manipulate them as you go. Bikes pedal to move around, doors open and shut, etc. Typically you’ll do this and end up setting up these Rube Goldberg machines to chain a bunch of stuff together to cause something to happen in the real world. For instance at one point early in the game you inhabit a fan and turn it on, then a blender and turn it on. You jump to a flag which then blows in the fan breeze and kicks the rope into the blender which winds the flag up the flagpole letting you jump to a new object.

This is all done to try and find out who killed you. You’re not going to come back to life here. There’s an interesting mechanic where you can wind back time in certain parts of the game and relive the last 4 minutes to try and change someone’s fate or alter the timeline. In these portions you can watch a scene unfold a few times (rewinding over and over) to quickly solve the jumping around puzzle and change the outcome.

There’s a lot of trial and error involved for sure, and you’ll likely have to replay certain parts a few times to figure out the solutions. One downside is that each thing only has the one answer, and I always prefer games that let you invent your own solutions.

The only real problem with the game is how slow it is. Not in pacing or gameplay, but the dialogue and between gameplay bits just roll out at a snail’s pace. You get a line or two of dialogue at a time, and there’s so much over talk (“Look over there!” “Over There?” “Yes Over There!” type stuff) that is feels like FOREVER to get through these conversations. It doesn’t help that tapping the screen doesn’t speed up the words onscreen either. Most times I’d get the gist of the conversation in 10 seconds but had to wait through a minute of doling out the sentences. It’s frustrating because you just want the game to shut up and let you play already! 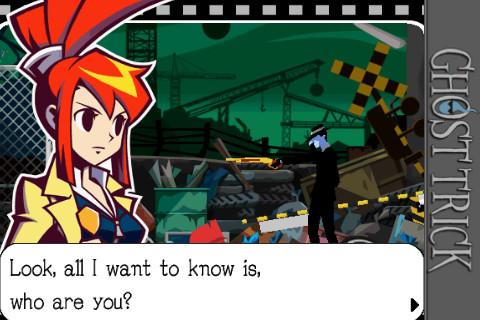 I know this is a little tiny minor detail, but I absolutely LOVE the icon for this game. Your poor body, faceplanted down with your butt up in the air while rocking a red suit. It perfectly encapsulates the weirdness that the game delivers in spades, and just gets a chuckle out of me every time I look at it.

It’s probably no secret that I loved Ghost Trick: Phantom Detective. I come from a background of point and click adventure games like Secret of Monkey Island and Sam & Max, which are famous for nonsensical problem solving and the importance placed on trial and error. If the game would’ve sped up the dialogue, I don’t think I would’ve had anything to complain about. Still, it’s a minor blemish on an otherwise fantastic title.