Ghost In The Sheet Review 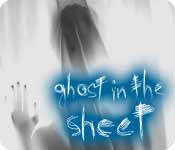 We’ve reviewed our fair share of adventure games here at Gamezebo, but Ghost in the Sheet is something a little different. Imagine point-and-click where you can’t actually pick up and carry items and are unable to touch objects directly because you’re… well, a ghost. In a sheet. It’s a great way to shake up the genre, and newcomers Cardboard Box Games pull it off well.

First things first: if you’re at all squeamish, disturbed by things supernatural or creepy, or offended by the occasional mild curse word like "arse" or "hell" then approach Ghost in the Sheet with caution. The subject matter is grittier than the average casual game (the retail version was rated "T" for teen). By the same token, if it’s a mature, darkly humorous adventure you crave then you’ve come to the right place.

The Ghost in the Sheet is actually a poor fellow who gets hit by a bus an finds himself in a sort of afterlife limbo with his essence held together only by the sheet that’s been draped over his body. He gets press-ganged into a rather suspect "ghost-catching" organization to help with a problem his newly-appointed boss is having. Apparently mortals back on Earth are dying, but for some reason their souls aren’t reaching the afterlife. Your boss asks you to investigate an abandoned factory for clues, and so you return through a pan-dimensional portal to the land of the living check it out.

Players use the mouse to move the Ghost through different rooms and scenes. When the mouse scrolls over an item of interest, the cursor changes shape to indicate the object can be clicked on to investigate it in more detail. It’s here that gameplay begins to deviate a little from usual point-and-click conventions, because the Ghost in the Sheet isn’t your typical protagonist.

For one thing, he can’t carry objects so there’s no inventory. Sometimes items that need to be used to solve a puzzle are placed in the same screen as the puzzle you need to use them on, but other times the simple task of figuring out how to get an object from one room to the other to be used in the second location becomes a puzzle unto itself – one ingenious example involves using a conveyor belt to move a container from one end of a large warehouse to the other.

The Ghost also has special supernatural powers that help him interact with his environment to make up for the fact that he can’t physically touch, grasp or push things. You’ll start off the game with Telekinesis, which allows you to move objects around within confined spaces like a single room. As you explore the factory you’ll earn more powers like the ability to push (and pull) objects, generate surges of electricity, light darkened areas, and even eavesdrop on other rooms.

Puzzle-solving isn’t exactly straightforward, but involves less of the self-contained brain teaser type puzzles (like peg-in-hole and pattern-based challenges) and more problems that involve figuring out how to use the Ghost’s powers in a given situation and making careful observations about the environment – every scrap of paper, bulletin board note and conversation snippet might tie into a puzzle later on so it’s important to pay attention to all of it.

With that being the case, it’s too bad that the game offers no automatic journal system to keep track of goals and key information you’ve acquired. Instead, be prepared to keep a real notebook and pencil handy so you can scribble down all the safe codes, employee ID numbers and machine diagrams the game throws at you.

While the puzzle-solving aspects of Ghost in the Sheet are enjoyable, the same can’t be said of the arcade-style mini-games that appear occasionally. These include a disgusting (and graphic) rat hunt where you bash the creatures with a brick as they squeak, and a frustrating challenge where you’re supposed to wrangle light bugs that just won’t sit still long enough. Mercifully, you can bypass the mini-games without penalty by simply hitting the Backspace key.

These missteps are unfortunate because otherwise the game flows very well and its offbeat humor adds the right amount of spice. Dialogue, although occasionally stilted, is quite entertaining overall and the voice acting is very good. Graphics are en par with similar adventure game offerings, and cutscenes are uniquely depicted as a series of black and white drawings.

Although you can’t try this one before you buy it, it’s pretty safe to say that adventure game fans who are comfortable with the subject matter will enjoy Ghost in the Sheet and the new twists it brings to point-and-click.