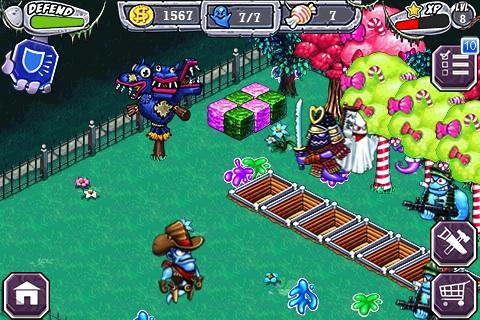 Ghost Harvest has plenty of style and charm, but the gameplay feels very familiar

It’s hard to play Ghost Harvest without thinking of Monsterz Revenge. Both are quirky social iPhone games that put you in control of monsters, and both games even have a bizarre combat mini-game. And while both are charming and fun, Ghost Harvest is a little too by the books to really stand ahead of its closest competitor.

The whole of Ghost Harvest takes place in a cemetery. Well, it becomes a cemetery eventually. At first it’s nothing more than a field, but you’ll be able to change that with a few trees, some precisely placed decorations, oh, and a few holes that go down about six feet. As the name implies, the main mechanic in the game revolves around harvesting ghosts. As strange as that may sound, it actually works much like in any farming social game. There are different types of ghosts, each take a certain amount of time to “ripen,” and then you collect some money once they’re ready for harvesting.

The difference here is that in addition to harvesting them for money, you also get to keep a few ghosts around for protection. Your cemetery, it seems, is under constant threat from paparazzi. The ghosts you can keep range from samurais to soldiers to nurses, and each has their own particular strengths and weaknesses in battle. And that’s where Ghost Harvest attempts to differentiate itself.

Every 30 minutes you get the chance to defend your spooky plot of land from would be intruders. Before things begin you’ll pick which of your undead soldiers will enter into battle, which is where essentially all of the strategy lies. Some ghosts are good at long range combat, while others are more defensive minded. Playing to the strengths of your team is ideal. But once you’re in battle all you can really do is tap on a ghost to make them attack, and that can only be done when you see a big flashing “Tap!” icon appear. It’s sort of like a tower defense game, only stripped down to its absolute basic elements. 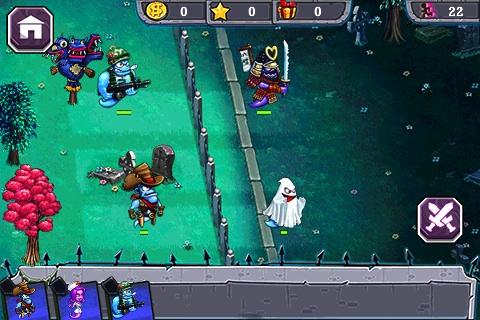 The rest of the game is solid, but not particularly noteworthy. Harvesting ghosts, decorating your cemetery, collecting ghost poo, completing quests; these are all elements found in virtually every other social game, just without the ghostly spin. But that might be what attracts at least some players.

Because if Ghost Harvest is nothing else, it’s definitely charming. The game looks great, and the wide range of ghosts and decorations are lovably quirky. There are also some elements that are downright strange, like the candy trees that sprout pinatas or the sheer existence of ghost poo. Ghost Harvest isn’t a game that takes itself too seriously, and this alone makes it at least feel unique, even if the gameplay is somewhat generic.

As the first social game to come out of EA’s 8lb Gorilla micro-studio, Ghost Harvest is at least off to a good start. It has its own unique style, and the setting isn’t one that has been done to death. But with its me-too gameplay and disappointing combat mini-game, Ghost Harvest also feels like a somewhat squandered opportuinity to create something that feels truly unique.