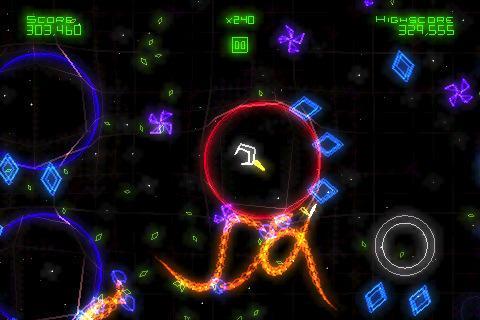 When Geometry Wars: Touch debuted on the iPad back in April, iPhone gamers felt a sadness in the pit of their stomachs. From Minigore to Pirate’s Treasure, twin stick shooters have been a mainstay of iPhone gaming. Now the biggest name in the genre had come to an Apple device, and it wasn’t the iPhone! Fear not, pocket gamers. Activision has recently changed the game from an iPad exclusive to a universal app, meaning iPhone owners are now able to dive into the same classic shooting as their big screened cousins.

Geometry Wars: Touch is a twin stick shooter in which you pilot a ship into battle as it defends itself from a variety of geometric shapes. Like most games in the genre, you’ll control your movement with your left thumb and your firepower with your right. Unlike most games in the genre, however, Geometry Wars: Touch isn’t just about survival. The game offers up 7 different game modes, each wildly different and offering their own objectives.

Veterans of the series may notice that these different modes sound strikingly familiar. For all the fun and excitement that Touch offers, it’s little more than a port of the 2 year old Geometry Wars 2 for the Xbox 360. Considering what an exceptional game the original was, there’s very little reason to be disappointed by this. Still – it’s not quite the original offering some might have hoped for. In addition to the 6 modes included in Geometry Wars 2, Touch offers a new mode called “Titans,” in which players fight giant enemies that when shot break into smaller enemies. It’s a fun diversion, but if you’ve grown tired of Geometry Wars 2 (and shame on you if you have) this single new mode will do little to satisfy for craving for something new.

Familiarity aside, the game only suffers from one flaw. Unfortunately it’s a biggie. The touch-screen controls aren’t as precise as they need to be. Other twin stick shooters on the iPhone manage to remember that they’re twin stick shooters on the iPhone. This means bigger characters, slower movement, and appropriate pacing. Touch never tries to be anything other than a faithful port of the original. Kudos for the respect it shows the series, but it means that things are moving too quickly for a player to be able to react effectively with on-screen sticks. 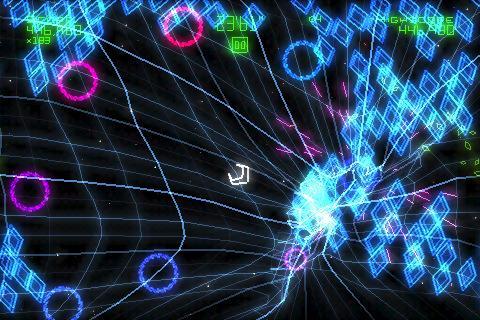 It should probably be noted, however, that this isn’t a consistent problem throughout the game. This is a perfect example of “everything works fine until it doesn’t.” You may be 2 minutes in on a terrific game of “pacifism,” only to not be able to not take that necessary right turn as sharply as you needed, steering you directly into the side of a gate and ending your game. The rest of the time leading up to that moment though? Problem free.

On the one hand, Geometry Wars: Touch is an incredibly robust offering by any standards. The variety of game modes, the leaderboard competition, the adrenaline-pumping gameplay – it’s a package that any twin stick shooter fan would die for. On the other hand, Geometry Wars: Touch demands a level of precision that can sometimes be a little too hard to pull off with the on-screen touch controls.

There’s no question that Geometry Wars: Touch is a must-buy for fans of twin stick shooters, but the game isn’t without its frustrations either. We love being able to put this perennial favourite in our pockets, but if you have the means, picking up Geometry Wars 2 on the Xbox 360 will offer the same experience without the difficulties brought through the touch screen gameplay.