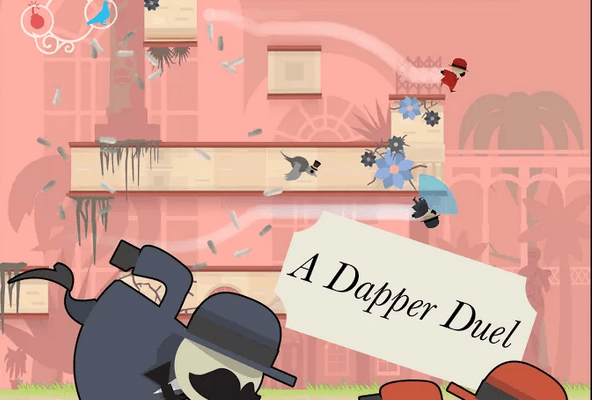 Gentlemen! is hilarious Victorian deathmatch action for you and a friend.

I’ve thought many times before that there simply aren’t enough local multiplayer games for tablet, in which two players battle it out from either side of the device. It seems like the perfect reason to whip out the iPad over a drink with a friend, or whittle away the hours on a long train journey. Gentlemen! fits this scenario perfectly, and I’ll definitely be reaching for my tablet time after time, if only to laugh in the faces of my foes as I rain pigeon-based hell down on them.

Two players sit opposite each other to play Gentlemen!, which may sound counter-intuitive, yet it’s quite the opposite. Everything from the text on screen to the levels is designed around being viewable and accessible to both players. Each player even has their own set of controls along the bottom (and top) of the screen. The idea is simple – kill the other player. This is a deathmatch game, in which each player is given a weapon, and told to rush around the level taking pot-shots at the other person. You don’t jump in Gentlemen!, but rather you flip – hit the flip button, and gravity will change for your bowler-hatted protagonist, and you’ll begin to run on the ceilings. Note that your weapons are also affected by the flip. 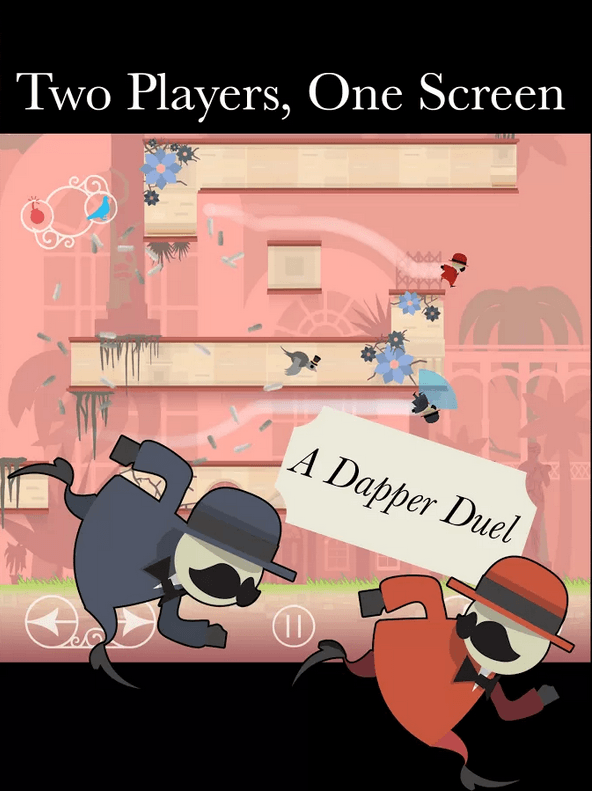 The weapons are what really set the gameplay apart. They vary wildly in both style and usefulness – the bombs, for example, can be a little sporadic as they bounce around the place, while the knife is a quick and easy “kill anyone who is put in front of you” tactic. Meanwhile, the pigeon is hilariously overpowered, as it flies through walls and homes in on the other player. You only get one weapon at a time, meaning that the other person might have a complete advantage over you. However, every now and again a weapon swapper appears, and if either player hits it, you’ll be granted a different get-up. Of course, while your finger is off the controls and reaching over to swap, the other player has an opportunity to deal the pain.

There are a few different game modes to try out. On top of the plain old deathmatch, there’s a mode in which the first person to grab three diamonds is the winner. Then there’s also “The Chase,” in which players take it in turns to have access to weapons, and the other person simply has to stay as far away from them as possible. It can be really hectic and hilarious at times, with plenty of screaming and a fair bit of tablet-wrangling. Gentlemen! looks great too, with massive style throughout. It’s not surprising, given how Lucky Frame’s past games Bad Hotel and Wave Trip were also magnificent in motion. This is a team that really gets how to put on a show, and I’m always excited to see what their next game will look like. 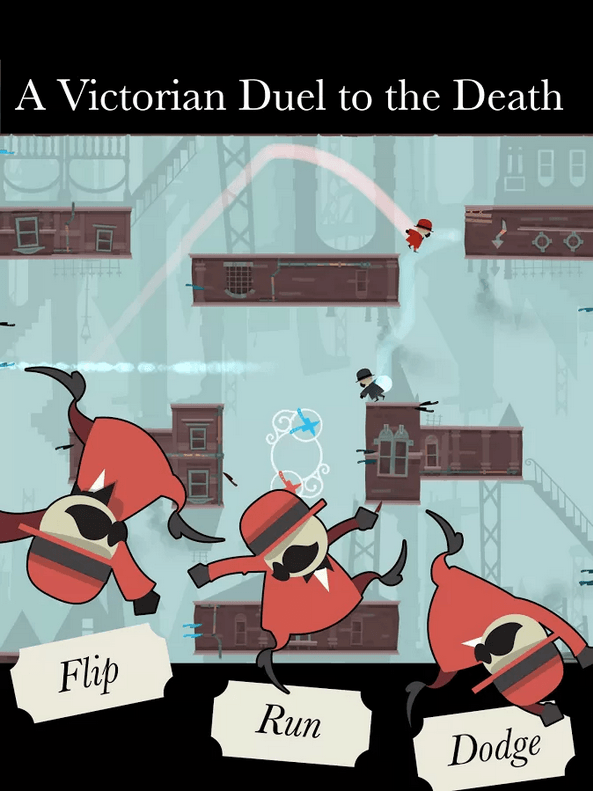 But while the team’s past games have laid on the content, Gentlemen! is notably lacking. It doesn’t take long until the action begins to feel repetitive and the fun wears off, and it simply feels like more of a prototype than a full game. I would have loved more weapons to experiment with, for example, and more game modes, more levels, more customization… just more everything, really. And the controls don’t feel completely spot-on, either. You can sometimes pull off some pretty amazing feats using the gravity switch, but in general, the touchscreen buttons aren’t tight enough, and I found myself often wishing that there were more options for controlling your guy other than attempting to replicate buttons along the top and bottom.

Gentlemen! is great fun, and well worth splashing out on if you often find yourself wanting to play tablet games with a friend. Solo players need not apply, obviously, but if you’re hankering for some friendly Victorian-style deathmatch, then this is a game that will suffice.