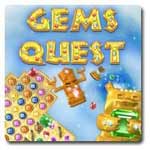 It can’t be easy anymore for casual game developers to come up with new ideas for match-three offerings. In fact, with hidden object and time management releases ruling the roost, one has to wonder why a company would even try. I’m glad the developers at Sulus Games were more optimistic, because if they hadn’t been, we wouldn’t have Gems Quest to play.

On the surface, Gems Quest sounds like dozens of other match-three offerings. Each level consists of a grid filled with colored objects. Your duty is to create matches of three or more objects of the same color to make them disappear from the screen. If the spaces beneath the objects you match up contain gold tiles, then the tiles are removed as well. Once all of the tiles are gone, you’ve won the level.

The power-ups are also old hat. When you create matches of four or more objects, a small portion of a status bar fills up; once full, it grants you one of three powerups. The first powerup is the Hammer, which you can use to break a single object and the gold tile beneath it. If you fill the status bar a second time without using the Hammer, you get the Bomb, which detonates everything within a 9×9 grid. Finally, you can earn the Color Bomb, which eliminates all of the objects of the same color on the grid.

Additional power-ups appear on the grid while you play. Fire Arrows destroy everything in their path, depending on the direction in which they’re pointed when you click them. Fire Balls destroy random objects across the grid. Many levels were designed so that when you begin the stage, you can activate an entire string of powerups with a single click.

If you’ve played any number of match-three games, you’ll also feel right at home as you progress through the stages. The story places you in the role of a young female searching the world for rare plants. As she scours a remote jungle, she stumbles upon the opening to a temple. When she enters through its door, she sees eight empty platforms. Within moments, a portal appears that takes her to an alternate dimension, where she must perform a variety of tasks that allow her to bring a stone totem bearing a magic gem back to her place and time. Early on, you assume something special will happen once you place all eight totems and their gems on the platforms.

The process of completing an episode is confusing at first, but becomes clear once you work your way through the first one. As you remove gold tiles, they’re set aside for later use. Once you’ve gathered all of the gold on a level, it’s used to cover a portion of the totem. You must complete several levels to completely cover a totem with gold. You must also collect 100 percent of the gems needed to create the larger gem the totem will carry back to the present time. Gems are collected by matching any gems on the grid or matching objects containing smaller bits of gems. Although all of this is more complicated than it needed to be, it doesn’t weigh down the gameplay too much.

Everything I’ve described so far follows lockstep with the majority of match-three games on the market. Gems Quest, however, features an innovative twist that puts enough of a new spin on the gameplay to make it worth playing. Each of the colored objects you match is an arrow, and when you click on the object, it moves in the direction in which the arrow is pointing. When the arrow reaches a barrier, such as the edge of the grid, it turns 180 degrees. There’s no limit to the number of times you can click an arrow to get it in position. In addition, if you click any of the gems on the board, all nearby arrows turn to point in its direction.

This gameplay mechanic allows for interesting match-three situations. For example, you can click a green arrow horizontally until it’s positioned two rows above two green arrows matched vertically. You can then maneuver a gem between the three arrows, click the gem to turn the top arrow downward, and then click the top arrow to shift it down into position for the match. This is just one simple example of the many ways in which you can move arrows and gems to create matches. Once you get good, you’ll be creating matches of four, five and six gems with ease.

You’ll need to increase your skills, too, because the level design gets tricky about two-thirds of the way through the game. Sulus created levels in which you must rely on powerups to clear isolated parts of the board before time runs out. This led to some nail-biting finishes as I clicked my way through the higher levels.

Unfortunately, the gameplay cuts off just as it’s getting really good. There are only 60 levels, which shouldn’t take more than a long afternoon to complete. And since the replayability factor of Gems Quest is zero, you might not feel like you got your money’s worth. If Sulus comes out with a special edition containing twice as many levels and a few alternate modes, then the game would be money well spent.

Still, it’s encouraging seeing developers trying to be creative in an established genre and pulling off something cool. Here’s hoping we see a better-rounded product from Sulus in the future.