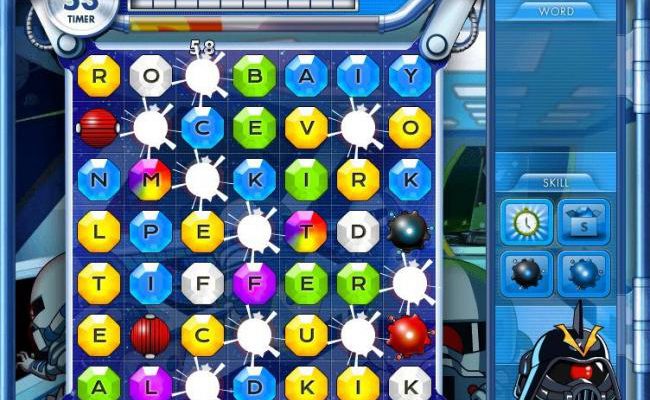 In space, no-one can see you spell. Unless you’re playing Gemmings Rush on Facebook.

Words have power. They can start fights, end wars, build up cities, and tear them down again. Words can even repair a broken-down space station, if the concept behind Gemmings Rush is to be believed. Gemmings Rush is a unique match-3/word game hybrid on Facebook that challenges you to spell words under pressure. If that doesn’t grab you, the game’s mascot—a frantic, cyclopean robot that looks like a squashed Darth Vader—probably will.

Gemmings Rush takes place on a space station. Something has gone wrong, and it can only be made right by matching up gems and letters. Forget oil, gasoline, dark matter, or even Mr. Fusion. In the future, space travel will be made possible through consonants trapped inside shiny things. 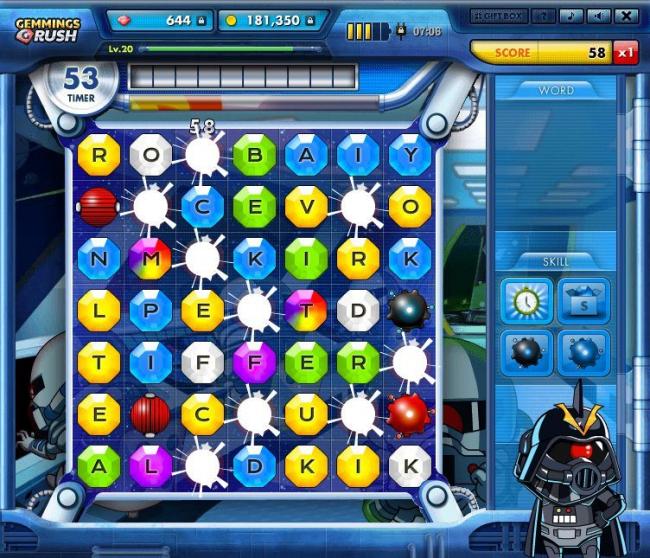 The game is easy to learn, which is good because it lacks a tutorial. At the start of a round, you’re presented with a grid that’s packed with gems. Each gem contains one letter. When you click on a letter, the color of the gem it belongs to lights up, and the rest of the grid goes dark. You must then spell a uniformly-colored word that starts with the letter you selected. If the word is valid, the gems explode, you win points, and the Darth Vader-looking guy on the bottom right-hand corner of the screen claps his hands with glee. If you manage to keep up a steady pace, you score combos.

You have 60 seconds to spell as many words as possible, though you can score bonus time if you do well. You can also use the game’s soft currency (gold) to buy items that extend your time limit. Other purchasable items let you blow up gems, or clear away entire rows and columns to help you improve your chances of spelling a real word instead of desperate, garbled nonsense. 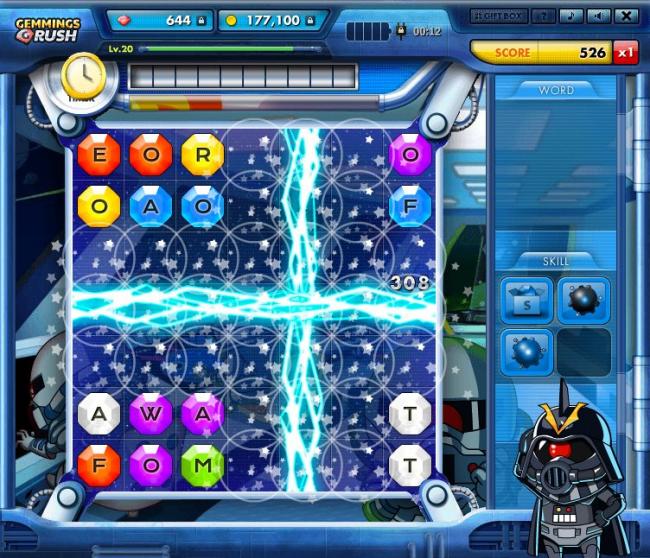 Gemmings Rush is fast-paced and fun. Its premise is simple but different, and is definitely welcome in a market that’s already packed with word games and gem-shattering puzzles. You need to move quickly, but you also need to train yourself to think one step ahead; if you panic and clamp down on the very first letter that catches your eye, you might discover that the rest of the letters in the available gems don’t spell anything from the English language. You can back out, but you wind up wasting time—something you don’t have a lot of.

Fun though it is, Gemmings Rush gets a bit repetitive after a while, and the looping techno music will induce insanity if you listen to it for too long. But you’ll almost certainly roll up your sleeves and dive back into the game after a small break. The simple, addictive mechanics compel you, as does that frantic Darth Vader robot -thing dancing in the corner.