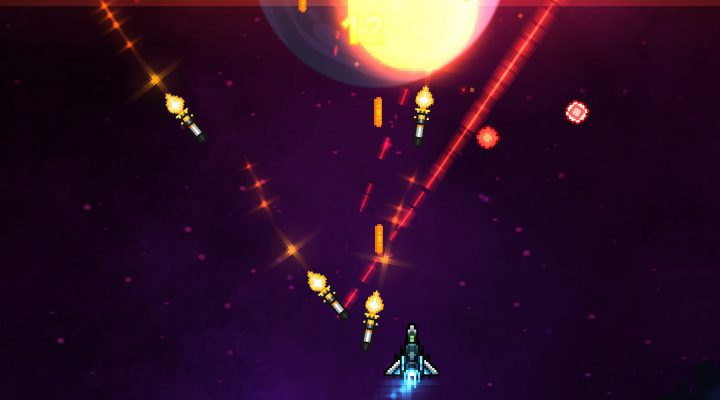 Strategic action that doesn't get too crazy.

In-app purchases are too expensive.

Armor Games is trying their hand at the shoot ’em up (aka shmup) genre with the free-to-play release of Gemini Strike, and it’s a solid little game worth checking out.

Essentially, if you’ve played one shmup, you know the gist of Gemini Strike: there are lots of enemies, and you need to blow them up before they blow you up. Thankfully there’s a health and upgrades system to give you a fighting chance, though it still requires a lot of skill to succeed at, and encourages learning how to dodge bullets far more as it does spending money to win. Plus, the game makes it quite possible to grind for more of the gems, the soft currency, necessary to buy upgrades. 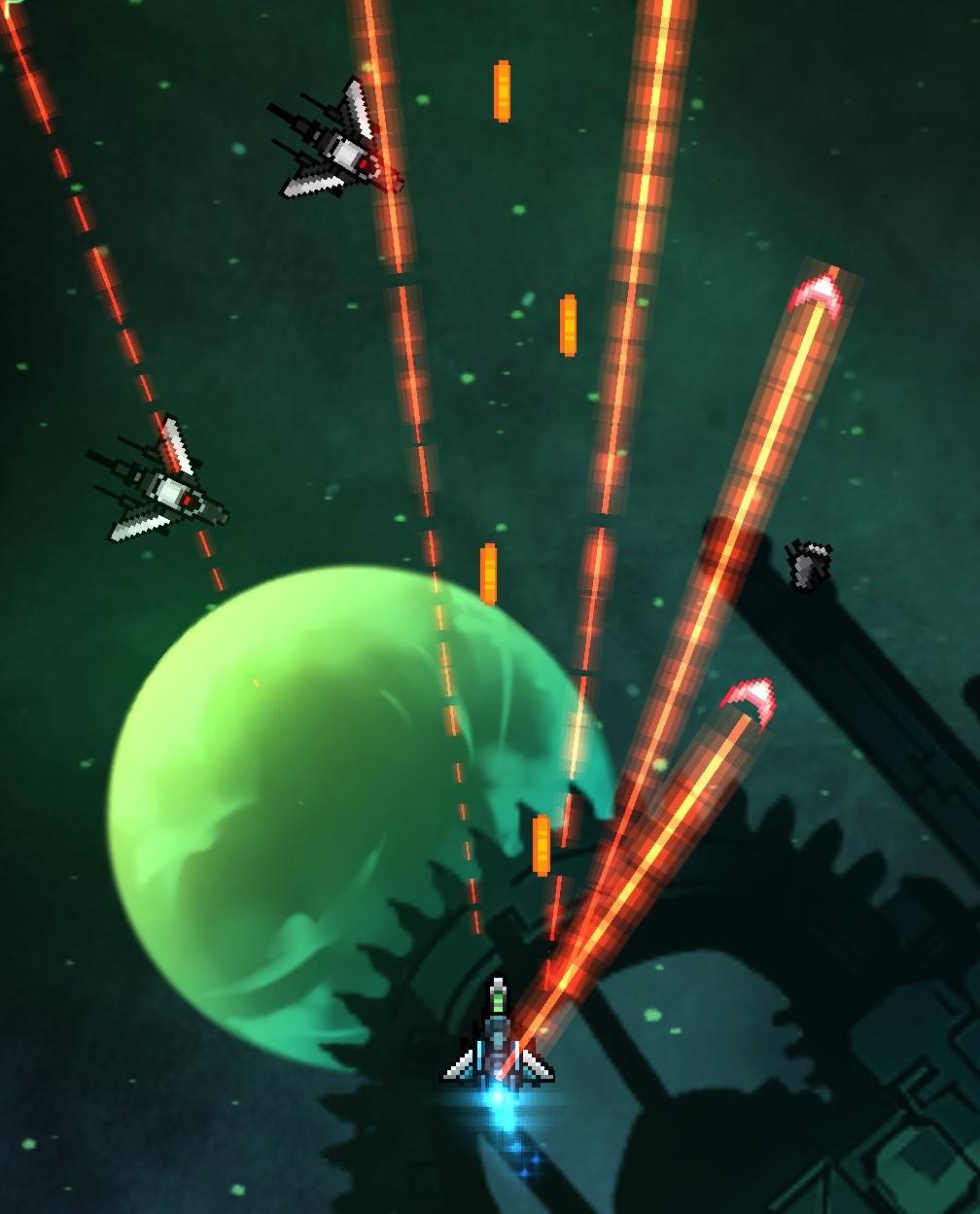 Bullet dodging really is quite important in this game for two reasons. One is that there are bullets everywhere; they do a lot of damage, and health is at a premium. It’s not quite a “bullet hell” shmup, but learning to weave in and out of fire, and to manage the homing missiles, becomes quite crucial. The second is that if you die, you can either spend a credit to revive, or lose a life.

Each life refills every 15 minutes, with a total of 4 lives. It’s a fair system. Ships can be upgraded with items found in chests collected while playing, which can be unlocked with gems, with items having both stat effects and modifying the ship’s weapons. There are also premium chests that can be unlocked with credits, which provide powerful items.

Also, the in-game lives system is explained with the best explanation since the original Infinity Blade, albeit with a lot more humor about it. In fact, the game takes an odd tone between being humorous in story and having a serious atmosphere. It’s a dissonant mix that actually kinda clicked with me.

The controls are a mixed bag. They work in a 1:1 ratio with a slight offset, meaning that the ship goes where the finger on screen goes, though it’s placed slightly above the finger so that it’s visible. This works great for dodging bullets. The problem is that if you lift your finger and place it back down, you need to be careful, as the ship will rapidly move to where your finger is. Also, tapping the powerup icon in the lower-left corner will cause the ship to move a bit unless you lift your finger. 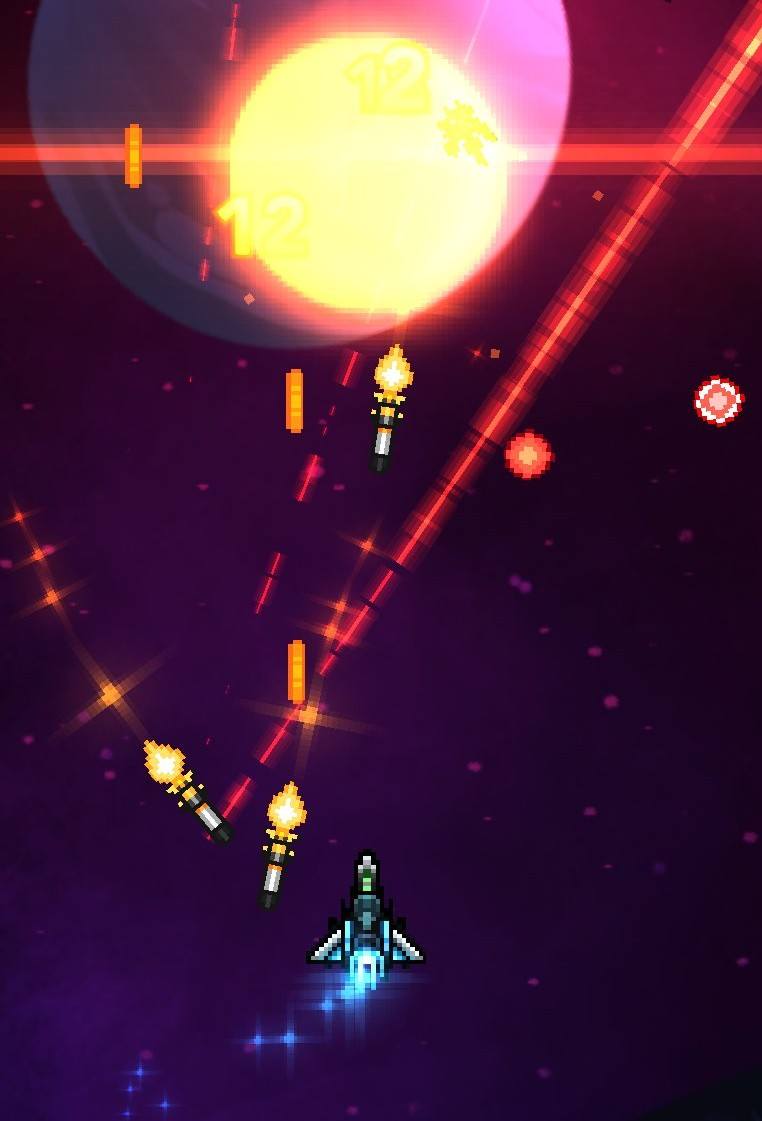 The whole scheme doesn’t feel terribly iPad-friendly, as you need to play with an index finger pointing and dragging around. It can be a bit tiring and uncomfortable. I’d appreciate an option with a greater ratio of “where finger moves to how far the ship moves” so that it could be played with just a thumb, but these control schemes always have trade-offs, and this 1:1 system otherwise works well. That said, I’d love MFi gamepad support.

Gemini Strike’s in-app purchases are a bit rich for my blood. $1.99 buys 2 credits, which isn’t even enough for a chest; $2.99 buys 5 credits, and then the next in-app purchase is $12.99 for 25? I feel like more of an intermediate pricing option would be welcome and something I’d be willing to spend money on. Something in the $4.99 range for those 25 credits would be ideal. I think about spending $12.99 for a few continues and a few random extra items and I bristle at the thought. It’s far from abusive or cynical free-to-play, it just feels a bit too pricey.

Incentivized video ads to get free credits would be a welcome feature.

But the IAP pricing doesn’t matter too much, as the gems can be earned through simple grinding, with plenty of upgrades and items to be had through credits alone. Heck, I recommend grinding that very first sector after completing it initially just in order to get more items and upgrades. The game starts to ramp up in challenge in that second sector, and having the power and health to survive is key.

And really, this game mostly does what I want out of free-to-play games: provide a core experience that’s fun, with worthy strategic action – at least for a casual shmup fan like myself. I totally understand that free-to-play games need to make money , and I wish this had cheaper purchases, but the monetization never feels like it’s trying to overtake the experience of playing the game. It’s just a part of it, and it doesn’t prevent the player from playing for free. It’s not a perfect free-to-play experience, but it’s on the right road for sure.

The game has an online component, where it’s possible to get daily credit bonuses, and send requests to friends. It’s quasi-optional, in that there’s a choice to make at the very beginning of the game: either play online, and always have to be online to play, or be able to play offline, but not get any of the social features or daily bonuses. Why exactly this is an all-or-nothing option is honestly not comprehendable, but hey, I’d rather have the option to play offline than not.

Gemini Strike is not a perfect game, but one with enough redeeming elements and things that can, at worst, be addressed in updates, that it’s worth checking out for the curious – especially at that free price. I appreciate that Armor Games is branching out to try new gameplay styles that they haven’t before. You can’t make an omelet without breaking a few eggs, and there are some tasty ingredients here.