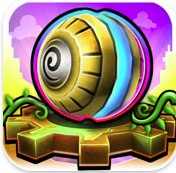 It’s been a while since a decent ball-rolling puzzle game was released for the iPhone, and it’s pretty safe to say that Crescent Moon Games isn’t the developer that you might expect to put out such a title. But now this studio that’s well-known for making epic RPGs can say that it’s put out a pretty epic ball-rolling title, too, thanks to its latest game in the App Store, Gears.

The premise is pretty simple: players have to move a ball from a starting gear at the beginning of a level to a funnel at the end. Along the way there are various tokens to pick up (some of them harder to snag than others), pathways to open up, and blocks to detonate. The game contains a number of difficulty settings, though playing through on the Easy mode is probably the best way to get introduced to the game, since there’s no time limit to try to meet. After players get the hang of things, playing on a harder difficulty is much more enjoyable.

There are two ways to play the game: swiping one’s finger across the screen, or tilting the iOS device. Honestly, the former is more enjoyable because it affords greater control over the ball. Players can drag their fingers across the screen to move the ball in a deliberate, controlled manner, with bigger swipes resulting in faster movement with more momentum (though this is much harder to manage, meaning it’s easy to fall off a random edge).

The levels become increasingly difficult (and, thus, maddening) as the game progresses. At the moment there are 27 levels across three different worlds, though it bears to reason that Crescent Moon Games will expand the game’s content in the future.

The production values in Gears are pretty outstanding. The game features some really lush 3D graphics, full of moving parts and steampunk aesthetics that really look great. The camera does a really nice job of following the ball around the various tracks, too, though occasionally environmental objects get in the way of the camera and can throw things off; alternately, it’s not uncommon to get a little dizzy when the ball starts spinning around on a random gear. The music and sound effects, meanwhile, seem really fitting and appropriate.

For the most part, Gears is a pretty addictive puzzle/platformer title that contains some delightfully fast-paced gameplay and is honestly pretty addictive. The tilt controls leave a bit to be desired, and there are occasional issues with in-game objects getting in the way of the camera, but overall this is a great game.

Burn It All Review