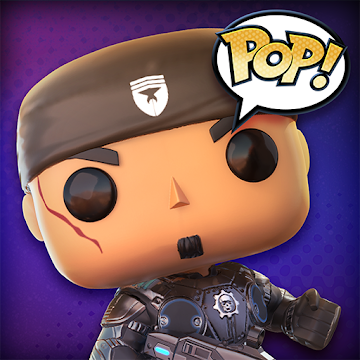 Makes good use of the Gears of War license

Battles are a bit busy and difficult to follow

Ultimate abilities are a bit unbalanced

It's not as good as Clash Royale

Gears POP! is a strange concept. Why did it take a partnership with Funko Pop! figurines – you know, those ugly big-headed figurines of pop culture figures – to bring Gears of War to mobile?

The actual concept would have worked beautifully without the Funko Pop! figures. It’s basically Clash Royale with a cover system. You create a deck of your favourite characters, including COG Soldiers and Locusts.

That’s right, you can team the goodies with the baddies to create the best of both worlds. Marcus Fenix and Cole Train can team up with random unnamed Locust soldiers to fulfil your dreams.

The whole building of a team is ripped right out of Clash Royale. Win a battle and you get a crate, which opens over time. We appreciate that crates start opening as soon as you unlock one, and that you can have all four crates unlocking simultaneously.

Team Building is Ripped Right Out of Clash Royale

Crates reward you with cash and cards – the latter of which are called ‘pins’ in Gears POP! – and once unlocked you can place them into your team. Collect enough pins of each character and you can upgrade them.

You can pretty much find a like-for-like version of each pin with its Clash Royale equivalent. There’s a Gears of War equivalent of the Knight, Spear Goblins, Bomber, Giant, and more.

The battle system is very similar too. Using an energy system you play your pins in the arena, with each pin costing a differing amount of energy. Energy you use gradually restores as the battle progresses.

Managing the energy system is just as key here as it is in Clash Royale. Ultimately, the one who wins is the one who learns how to effectively counter their opponent’s play, gaining an energy advantage.

Managing the Energy System is Just as Key Here

There is a twist to the formula though, and that’s in the cover system. This doesn’t work as you think it might, with your units taking reduced damage while in cover though, which is a shame.

Instead, certain units will run into the nearest cover and “capture” it, as they would a flag in a usual match of domination in your typical shooter. If you capture cover on adjacent sides of the arena, you’ll gain ground, allowing you to play pins higher up the arena.

This dominates the early play, with you and your opponent battling it out for ground. This is key, as the player who holds the most ground will typically dominate the end game, when your energy is doubled.

You’ve also got your ultimate ability. This charges and doesn’t cost energy to use, and comes in a variety of forms. There’s the Emergence Hole, which plays like the Graveyard in Clash Royale, temporarily unleashing Wretches on the battlefield. The Hammer of Dawn is another one.

Overall, we have mixed feelings about Gears POP!. It sticks very closely to the Clash Royale formula, which isn’t really a bad thing given how polished that experience is, but the cover system fails to provide enough meaningful change.

It does change how you play, often slowing down matches a tad and give you more to think about than just destroying towers, but it’s disappointing when the alternative – playing purely defensive units that used cover effectively – would have been far more appealing.

It’s all just a little bit too busy as well, and we often lost track of the battle in a way that we never do in Clash Royale. This is likely down to learning the ins and outs of each unit, but part of it is down to the dull character design. Everything kind of just blurs into one, with little defining features for each character.

Finally, the ultimate ability is a bit naff as well. While this should be a rare ability that you can call on when the tide of the battle isn’t in your favour, it’s instead just another ability that you can use whenever it recharges. As a result, you just find yourself waiting for your opponent to play theirs so you can counter it and move on.