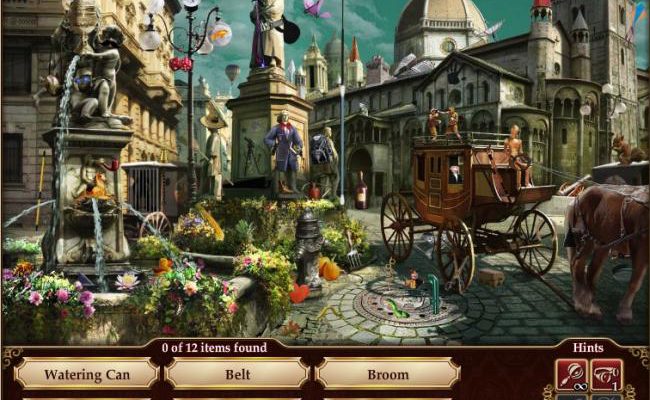 The number of hidden object games on Facebook may still be relatively small, but the quality of new releases is steadily increasing. And Gardens of Time might just be the best yet. It has all of the features inherent to a great HOG—gorgeous visuals, plenty of scenes to explore, and an interesting world filled with great characters—and tailors it almost perfectly to Facebook. There are a few issues with repetition, but Gardens of Time is sure to satisfy any HOG nut.

You play as a potential new recruit for the Time Society: a group that travels back and forth through time, exploring important moments in history. You’ll get to go to places like Ancient Egypt and 1960s London, guided all the way by a pair of helpful mentors. And you’re not even the only one that is trying to get into the Society, as you’ll have a bit of competition in the form of a young lady who doesn’t quite like to play by the rules.

The game itself is divided into chapters, each of which has a number of different scenes to explore. But you’re free to go back and forth between chapters and scenes as you see fit. In fact, you’ll have to do quite a bit of backtracking in Gardens of Time. 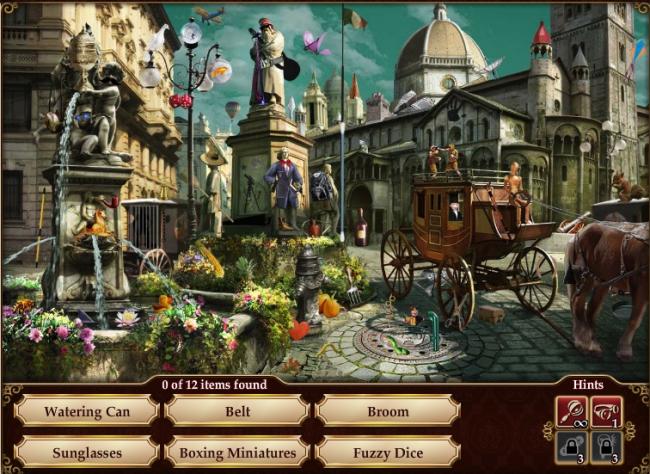 It plays like a fairly traditional HOG, for the most part. Scenes feature a dozen or so items listed at the bottom of the screen, and you’ll need to pick them out as fast as possible. There are no time limits in the game but you get bonuses for speed. There’s even the odd spot the difference scene, a mainstay amongst HOGs. You’ll be able to use a helpful hint system that refills over time, just like in standard donwload HOGs, but there are several other tools to help you as well. There are goggles that point out where objects of interest are and a thermometer that guides you in the right direction. Unlike the hints these power-ups aren’t unlimited, instead you’ll need to trade with friends to gather more.

The way the game is structured means you’ll have to play scenes numerous times. Each time you complete a scene you’ll earn points that go towards your star rating, for a maximum of four stars per scene. But to get those stars you’ll need to play through the same scene many times. You won’t always need to max out a scene to proceed, but even getting two or three stars will take several playthroughs. The objects you’ll find change up each time you play a scene, but they’re still located in the same spot, which can make later playthroughs of a scene incredibly easy and somewhat dull. 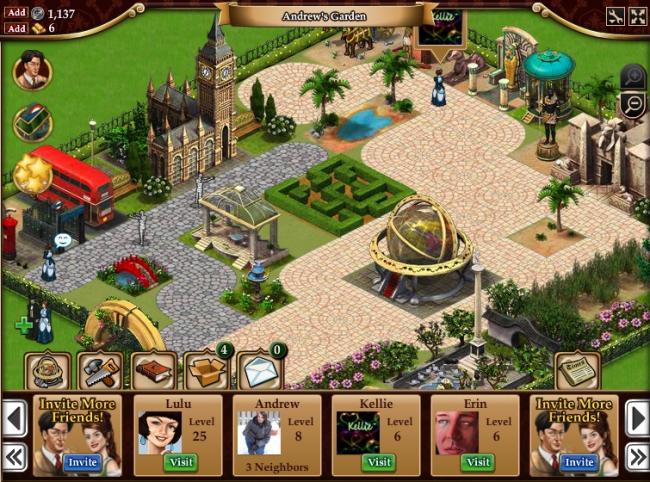 In addition to the HOG portion of Gardens of Time, you’ll also have a garden to decorate. As you earn cash finding objects, you can then put it towards buying ancient artifacts and other historical objects to spruce up your garden. It’s not just for fun, though. Decorating earns you reputation points, which are necessary to unlock new scenes to play through.

You can of course visit your friends’ gardens, and while there you’ll often come across people in need of some help. This will take you to a HOG mini-game that takes after Bejeweled Blitz, forcing you to find as many objects as possible in just 60 seconds. You can also send gifts back and forth with friends or challenge them to beat your high score on any particular scene.

Aside from the somewhat repetitive structure, there’s really very little to complain about with Gardens of Time. It’s a high-quality HOG set in an interesting world that you can play for free. Gardens of Time is what a social HOG should look like.