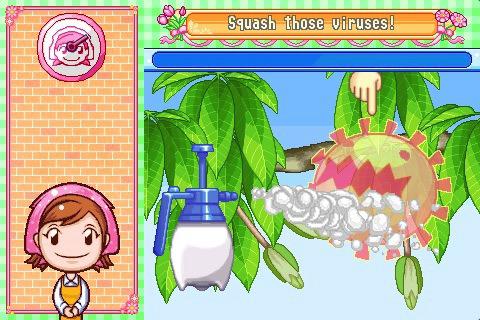 Mama trades in her sweet tooth for a green thumb

The always cheerful Mama has traded in her spatula for a trowel in Gardening Mama, the latest game in Taito’s series of themed mini-game collections. It maintains the same formula that made the Cooking Mama games so popular, creating an experience that’ll be very familiar to anyone who has played those games in the past. But it’s still fun and charming, and a game that’s almost perfectly suited for the iPhone’s touch screen.

At its core, Gardening Mama is a collection of gardening themed mini-games. You’ll be planting seeds, fertilizing and watering plants, spraying fertilizer, and all kinds of other activities sure to add a little green to your thumb. All of the games are controlled via the touch screen, so you’ll be using your finger to tear open seed packets and pour watering cans and spray insect repellent. The controls are solid and not too sensitive, and for the most part the instructions are pretty clear. There is the occasional instance where it’s tough to figure out what exactly you’re supposed to be doing, but since your going to be doing each mini-game multiple times, it only takes a few tries before you’ll get the hang of things.

Each game is timed, but the limitations are very generous especially considering just how quick they go by. You’ll be scored at the end of each and you can replay games to boost that score. As you progress you’ll unlock additional gardens and plants, as well as new clothes for Mama. At the beginning you’ll only have access to two gardens and a handful of plants, but soon enough you’ll have a blooming nursery full of flowers, herbs, fruits, and vegetables. There’s a map screen where you can access all of the different gardens and it also alerts you to any new or wilting plants. And if you don’t get on those wilting plants quick enough, they’ll actually wilt away.

The Mama series of games is known for its unique charm, and Gardening Mama is no exception. The visuals are achingly bright and colorful, and Mama always has a bright smile on her face. Accompanying the cheerful graphics is an equally happy and bouncy soundtrack that you’ll be humming for hours after you stop playing. It also includes the now infamous “Engrish” voice over for Mama, which is as endearing as it is potentially offensive.

If Gardening Mama was the first game in the series, it would be a revelation: it’s full of great mini-games and is so smile-inducing it may cause your face to hurt. But it’s not the first, and it’s hard to ignore just how similar it is to past games in spite of its new theme. That’s not to say it isn’t great, it’s just a little too familiar in places. But if you’re up for a little agricultural fun, there’s really no better place than Mama’s garden.