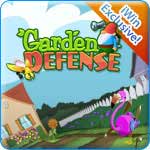 As anyone who’s tussled with a gopher or combated a mole in hopes of guarding their precious flowers and/or vegetable patch can attest, protecting one’s home from pests can be a daily battle. Now, the pastime’s also an incredibly deep and engaging real-time strategy game in the form of Garden Defense, another smash hit from the folks at iWin.

One of the most slickly-produced titles we’ve ever seen, the action kicks off with a bang in the form of animated, Flash-style cutscenes complete with high-quality voice-overs. You’ll quickly learn about the plight of small town Lindencroft, and how one young lady’s family saved it from certain infestation by taking up arms against invading bugs. As cleverly introduced and presented as certain animated films, complete with a host of characters from the zany inventor dad to kung-fu expert mom, expectations were high diving into the outing’s actual campaign. Lo and behold, we were pleasantly surprised to learn that the focus centers on challenging, click-happy tactical battles, the likes of which are typically reserved for traditional, more hardcore videogame offerings.

That’s not to say you’ll have trouble comprehending the basics; quite the opposite, in fact. Essentially, each stage – set at a garden housed at locales like a museum, forest or your own backyard – consists of a series of paths leading to an endpoint where flowers lurk. Your goal is to stave off encroaching insects, which attack in individual waves that pass as self-contained sub-levels. (In other words, while backgrounds don’t change often, you’ll face different sets of challenges at each, with options to pause and regroup between them.)

It all starts with a wave indicator that reveals what sort of creatures – e.g. fast fliers, slow crawlers, hard-to-kill boss characters, any combination of the above – are coming next. Given this information, you have to place certain defenses (disguised as everyday lawn ornaments) atop the limited map space available. One’s arsenal includes gun-toting gnomes, urinating cherubs that create baddie-slowing puddles, wind tunnel-creating flamingoes, seed-spitting sunflowers, spine-throwing cacti, toxic gas-emitting nightbells and more. Each unit boasts unique speed, power and range ratings, with all talents upgradeable through ability-enhancing improvements purchased using cash earned slaying foes, or by letting organic weapons grow naturally. Lab options further let you get the jump on adversaries by adding rocket launchers, arrow-firing Cupids, faster unit deployment and extended shot distances to your pool of tricks with skill points scored via efficient maneuvering.

Armaments are further divided into categories, such as plants (which can be placed only once, but have large attack radiuses) and gadgets (packing shorter reach, yet able to be shuffled about stages at will). Play works by first placing them strategically, then clicking a button to make assaults commence, and afterwards reacting in real-time to threats, swapping defenses in and out of different positions as situations dictate.

For example, you may group obstacles and offensive installations near a level’s starting point to greatly weaken the snails and worms that crawl out up-front. But if a group of beetles or butterflies follows and suddenly takes a branching path, it may be necessary to quickly shuffle those gnomes and flamingoes to another part of the stage dynamically. Time control functions add even more depth, letting you speed/slow the clock as necessary. Support for making opponents a priority target (letting you, say, concentrate fire on the weakest member of a group versus spreading out attacks) with a click also proves a welcome addition.

Though a bit more complex than casual gaming fans are likely used to, the game offers hundreds of addictive bite-size battles to sink your teeth into. Sound and animation quality is also universally solid in a colorfully cartoonish way throughout all, while the surprisingly brisk pace, wealth of unique scenarios and constant range of bonuses ensures you’ll never get bored. Progress far enough into the adventure and you’ll even enjoy additional movie sequences, plus gain access to powerful allies like trainable bugs and super-powered spiders.

Appropriate for play in both short/extended spurts, color us stunned: Who knew playing armchair general could be so fun? An impressive feat of game design by any measure, Garden Defense deserves the highest praise possible for serving everyone’s favorite desktop hobby with dignity and honor.