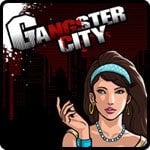 The game loads. A comic book inspired cut scene begins. A voice-over starts. From the moment you first step into Gangster City you know this isn’t just another Facebook game. It’s a story. It’s an adventure. It’s something we’ve never seen before – a Facebook game with a compelling narrative. Playfish games have taken the Facebook RPG structure popularized by Mafia Wars and turned it on its head, and we’re loving every second of it.

Gangster City is a tale of classic vigilante justice against the mob. If you’re a fan of Mack Bolan: Executioner or The Punisher, you’re going to feel right at home in Gangster City. Unlike other mafia-themed games on Facebook, your goal here isn’t to be a boss – it’s to bring one down.

A classic tale of mafia-opposed vigilantism wouldn’t be complete without the death of a family member to fuel the fires of revenge, and Gangster City follows the formula perfectly. Your father (god rest his soul) got mixed up with the mob and ended up in an early grave due to that dirty business. But dirty or not, pops was a good man. It’s up to you to get your revenge – and that’s where the story begins.

If movies and TV have taught us anything, it’s that the only way to take down the mob is from the inside out. You’re going to have to get your hands dirty. Infiltrate the Cosa Nostra. Become one of them. This means completing tasks, doing bad deeds, and working your way up the ranks. To do this you’ll engage in a number of activities that will feel familiar to any Mafia Wars veteran – but don’t think that means this is just another clone. Gangster City refines and reinvents the genre at every possible turn.

Most games of this sort are cold and clinical menu-based affairs. Sure you might be fighting a dragon, tackling a fashion runway or whacking a mafia don – but no matter what storyline is placed on top of the format, the dramatic elements of this genre have never seemed to click. Gangster City is different. There’s a story here that manages to compliment the gameplay. You don’t just select missions from a menu – you get them from relevant characters. You don’t just whack a mobster because he’s there – you do it because it helps cement your place in the family so you can exact your revenge. But story elements aren’t the only new twist that Gangster City brings to the table. These mobsters have a steamer trunk full of tricks they’re bringing to the table.

Each mission blends the two elements of Facebook RPG’s that are usually kept separate – the task itself, and multiplayer battles. To access the task you’ll still need to meet certain requirements. Have X amount of energy, make sure you have weapon Y – that sort of thing. But once the task is accessed you’ll need to be able to defeat your opponent based on your attack and defense stats. Blending these two elements was a stroke of genius – it adds a level of strategy to the mission-based portion of the game while at the same time presenting something that’s totally familiar. And since you’ll only be allowed to equip a certain number of weapons, you’ll need to pick and choose wisely depending on the task at hand.

The game wouldn’t be complete without some form of real multiplayer battle, and again, Gangster City makes some smart choices in game design. In this case, you’ll be robbing different players based on the in-game properties they own. What’s unique here is that you’ll be able to purchase different lists of players to rob. You can grab a free list with random players on it, pay for the Rich List and hit up players with a good bankroll, or buy the Weak List and prey on some easy targets. It adds a little something to a multiplayer formula that usually presents little more than a random list of other players to do battle with.

Rather than relying on a separate energy bar for player interaction, the multiplayer element of the game shares the same energy bar as the mission mode. This means you’ll need to ration out your energy wisely before jumping into an entanglement. It’s little changes like this – sensible changes to a well-tread formula – that make Gangster City such a success.

Presentation here is outstanding as well. Each job you do comes with its own little 3 second cut scene. Stealing a car at the behest of your bosses? Get treated to a hotwiring cut scene. Getting into a firefight? Watch the bullets fly, complete with comic book onomatopoeias. The presentation in Gangster City isn’t just exceptional because of the polished visuals, but because of the attention to detail. Every moment of the game feels unique. Each little facet has its own art or animations. No two moments ever feel truly alike, and even if they do, it’s lightyears from the menu-based cookie cutter gameplay that we’ve come to expect from the genre.

There’s no two ways around it; Gangster City is the next evolution in Facebook gaming. It revisits a popular genre, keeps everything that was great intact, and repackages the rest in a way that feels fresh and unique. Gangster City takes the traditional Facebook RPG and turns it up to 11. It’s everything you loved about Mafia Wars put in a blender with unicorn dust and pixie wings. It’s magical. Evolving a genre is a major challenge; usually it happens in bits and pieces over time with no one game able to claim they single-handedly reinvented the genre. Gangster City is more than just a great Facebook game – it raises the bar for every Facebook RPG that follows it.