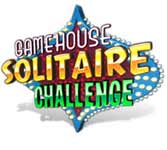 Solitaire is so old that historians don’t even know precisely who invented it, when or where – but that hasn’t stopped countless people from enjoying the card game and its many variations. GameHouse Solitaire Challenge doesn’t put a new spin on Solitaire like we’ve seen with Fairway Solitaire, Solitaire Cruise and other casual game offerings. Rather, it’s a straightforward collection of 10 of the most popular types of Solitaire with a Challenge mode and stat tracker thrown in.

There are no flashy backgrounds, fancy power-ups or gimmicky themes here. In fact, think of it as the digital equivalent of dealing out your deck of cards at the kitchen table.

From the main menu, you can start a new game choosing from one of ten different types of Solitaire. Each are slightly different, but involve some variation of placing cards in descending order in columns (sometimes it’s cards of the same suit, sometimes alternating colors, and so on) while trying to fill reserve piles of cards in the correct order (generally Ace to King of the same suit).

Each game type is assigned a difficulty level of Easy, Medium, Hard or Expert which allows players to decide how much of a brain-taxing experience they want and cater their choice accordingly. For example, people wanting a simple diversion could pick Klondike (traditional Solitaire), while the more adventurous could try Pyramid, where the goal is to remove pairs of cards that add up to 13.

There’s also Spider and Free Cell (which should be familiar to anyone running a recent version of Microsoft Windows), La Bell Lucie, Nestor, Tri Peaks, Canfield, Addiction and Forty Thieves.

At the beginning of each game you’ll get a text-based tutorial explaining the rules and how to play. You can consult these rules again at any time during the game from the menu, but a visual and interactive tutorial would have also been nice. The game keeps track of your wins, losses, win percentage and winning streak, which are displayed on the main menu screen. There’s an Undo button to cancel the last move, and if you run out of moves the game tells you and gives you the option to deal a new hand or replay the same hand and try a different approach. If you exit an unfinished game, your progress will be saved and you can resume from where you left off the next time you click on it.

Challenge mode offers 40 challenges to complete, all of which involve playing the games in a slightly different way than you’re used to. Examples include beating the game without using the Undo button or in less than four minutes, or having limited shuffles, no hints, all cards except the bottom row facing down, or only one or two suits instead of four.

GameHouse Solitaire Challenge takes a Spartan approach to graphics. The layout is a simple card table reminiscent of a casino, and you’re treated to a simple animation of a dealer laying out the cards before each game. You can choose from four different designs to apply to the back of the cards. In this day and age, such a barebones presentation really doesn’t cut it. Heck, even Windows Solitaire of ten years ago had nicer-looking cards that boasted animations too (does anyone remember the card shark deck where an ace would sneak out of the dealer’s sleeve?)

That said, the game’s biggest strength is that it’s ten games in one package. My favorite, aside from the infuriatingly addictive Spider, was Forty Thieves, which is like Klondike but with twice as many cards that must be stacked downwards in the same suit. If it’s a straight-ahead card game you want, GameHouse Solitaire Challenge will do the “trick.”