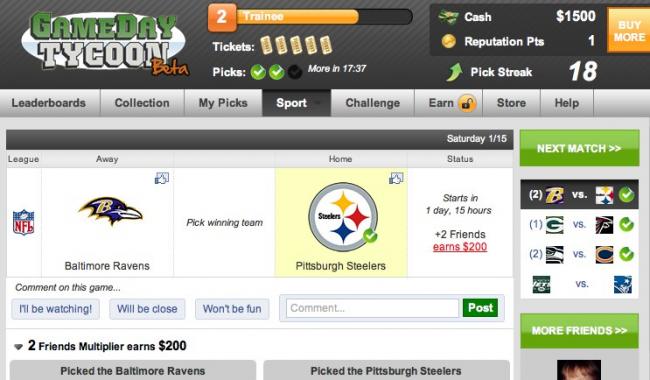 While it’s likely not the most robust app for fantasy sports, Gameday Tycoon succeeds in simplicity.

Just in time for the NFL football playoffs, Gameday Tycoon brings fantasy sports to Facebook, providing just enough fantasy to whet any sports fan’s appetite, but not enough statistics for true fantasy sport fan aficionados. And, Will Smith is not my friend. More on that later.

Your objective in Gameday Tycoon is simple: to predict the outcomes of various sports games that will be played in the future. Depending on how well you can predict, you will be rewarded with valuable cash and experience points, as well as an option to brag to your Facebook friends.

On the outset, you are given a tutorial that shows the basics of how the game is played and how picks are made. Much like energy in other games like Mafia Wars, “Picks” are given out at certain time intervals and are what is used to make picks on an upcoming game. You can choose what types of games from four different major leagues including the NFL, NBA, MLB and NHL. If your pick is correct, you’ll earn a certain amount of experience points and coins after the winner has been decided.

Social elements are sprinkled throughout Gameday Tycoon, and mostly involve you competing with your friends to decide who can make the best picks at any given time. There are leaderboards and you are shown results right on the picking screen as well. Depending on how good you are at picking, you may come on top of your friends. You’re also given opportunities to go up against your friends in the game’s Challenge mode. In this mode, you can form up a team of friends and then challenge another’s opposing team. The winner of the challenge is decided based on what the challenge entails. An example would be to “Pick 40 games correctly.” The first team to then predict 40 games correctly would win the challenge earning experience points and cash. All of these additional social features add to the overall experience by allowing you plenty of times to have fun by challenging your friends (isn’t that what all social games should try to do?) 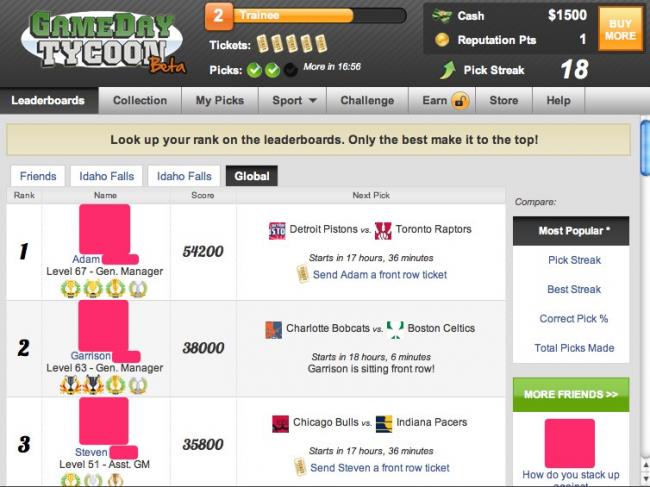 You can also purchase teams from each league. When this team wins games, you will earn additional experience points and cash.

As in many other Facebook games, Gameday Tycoon allows you to collect trading cards (of players) to make up a collection. On the cards are the player’s picture and statistics. These cards can either be purchased with in-game cash, reward points (premium currency) or by playing a simple instant win card game on your friends’ profiles. Collecting specific combinations of cards and turning them in will earn you additional coins and experience points. I can see how players enjoy the collection features in other games, but I feel that this game relies to heavily on reward points to finish them. 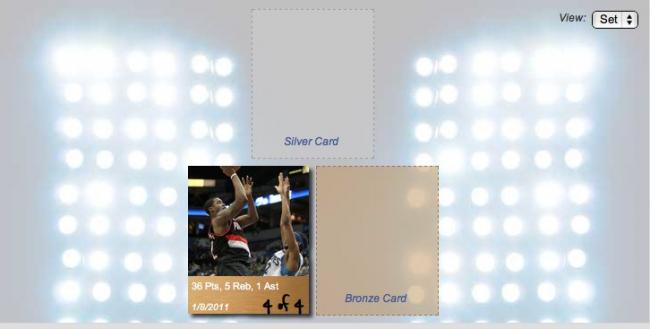 With all that is good about Gameday Tycoon, (and it is mostly good), there are a few parts that had me shaking my head.

For one, I apparently had a lot of friends playing the game that weren’t actually playing it. Get this: The game attempts to trick you into thinking you have friends playing it so you will keep playing and bug them to play the game. While I don’t have a problem with a game attempting to lure in new players, I couldn’t help but feel this strange practice felt rather shady at best. On top of that, Gameday Tycoon insists that I am friends with the film actor Will Smith, which I can assure you I am not. My other issue is that the game seems limited to just those few leagues. Right now, three of these leagues are currently active while one is not. Perhaps the addition of college-level leagues would help add to the variety. I suppose this is also just the nature of the beast, as there’s not much you can do about these sports in real-life either.

Gameday Tycoon seems like it should itch that fantasy sports edge that many players have likely been looking for on Facebook. However, those who enjoy a hefty amount of statistics in their fantasy sports will likely find the game a bit too light in this area.