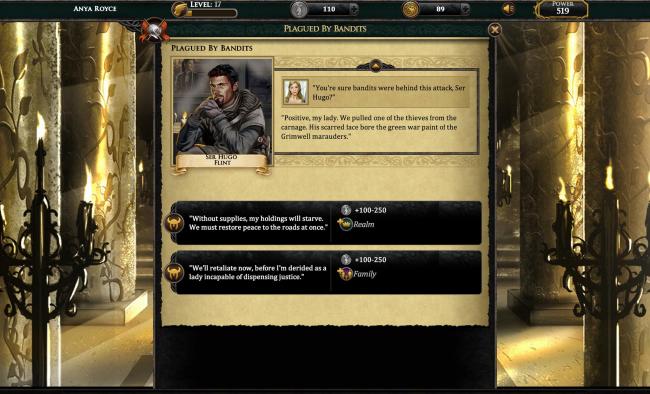 The fantasy world depicted in Game of Thrones is fun to visit on HBO, but living there might not be (largely due to the difficulty of keeping your head attached to your shoulders). Disruptor Beam wants you to be able to experience all the intrigue and excitement of Westeros from the safety of your computer, creating the multiplayer RPG Game of Thrones Ascent for Facebook. The Iron Throne beckons, but only if you keep your friends close and your enemies closer.

Since secondary characters have even shorter expected life spans than the main ones in Westeros, Game of Thrones Ascent puts you in the boots of a newly minted noble. The quests in the game’s prologue get you set up with some land and a circle of advisers while acclimating you to the decision and alignment mechanics. You’ll also pick up the first of your Sworn Swords; NPCs who further your goals through force, trade or trickery.

The bulk of the story plays out through the quests, which force you to make choices on how you want to handle various threats to your holdings, family and the larger game world. You’ll often be able to consult one of your advisers to get more information, but once you decide on a course of action, there’s no going back. The result is a true branching storyline, though one that always keeps moving regardless of your actions.

Questing decisions also determine where you fall on the three-axis alignment system. Your character will eventually lean one way or the other on New Ways versus Old Ways (mostly involving religion and tradition), loyalty to the Realm or Family, and a reputation for being Truthful or Cunning. It’s fairly easy to trend in one direction most of the time, but every so often you’re thrown a curveball in the form of a choice that makes you consider your actions more carefully, making the system fairly sophisticated for a browser-based title.

At some point in every quest, one of your Sworn Swords will have to get involved. Their success in achieving your goals depends on the sum of their skills plus your own, modified by any gear they have equipped. They always have multiple ways to tackle each obstacle, though since they specialize in combat, trade or trickery, certain actions will become their default methods. Sworn Swords get you silver and items if they succeed but suffer wounds if they fail, and five wounds send them to their graves. This is Westeros, after all, and life can be fleeting.

Game of Thrones Ascent wouldn’t be much fun if it was a solo affair, so it gives you several ways to interact with other players. Some quests allow you to bring one of your in-game friends into the narrative, though it’s not specified ahead of time exactly how they may factor in. That can lead to some… interesting situations, like when I was asked if I wanted to take one of my male buddies’ characters as a lover. 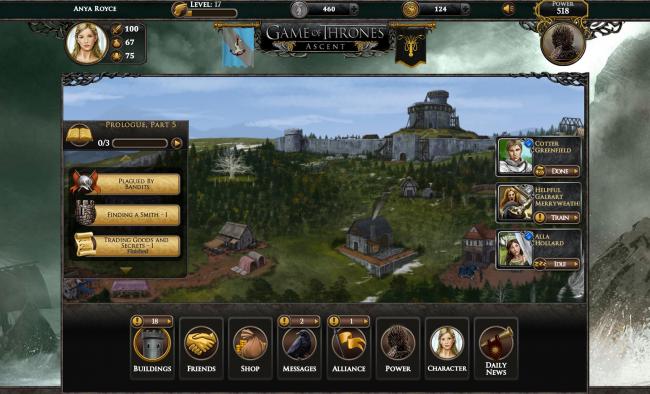 Other times you’ll find yourself in a group event where multiple players cooperate toward a common goal. Everyone’s Sworn Swords participate in these, with the best rewards going to the people who contributed the most. The game also supports alliances made up of large groups of players, and while it remains to be seen how the community will develop, joining one seems like it will up the intrigue factor a good deal.

Advancement in the game is measured in two ways. The first is your character’s level, the standard RPG measure that unlocks new content and gear as you progress. Leveling up allows you to add one more point to your talent tree, boosting your character in a general manner or a way specific to the great house to which you’ve pledged your loyalty. The second measuring stick is power, which increases as you build structures and finish off quests, and is a quick way to see how you’re doing compared to other players.

Speaking of structures, there’s a fairly robust system of building and crafting for you to tend to on the home front. What elevates it above those found in similar games is the way it works organically, with resources produced in one building needed for crafting recipes used in another, and you’ll eventually find yourself with everything humming along at once – if you can remember which building produces what without needing a flowchart. Building upgrades often give your character direct stat increases, making them meaningful too. 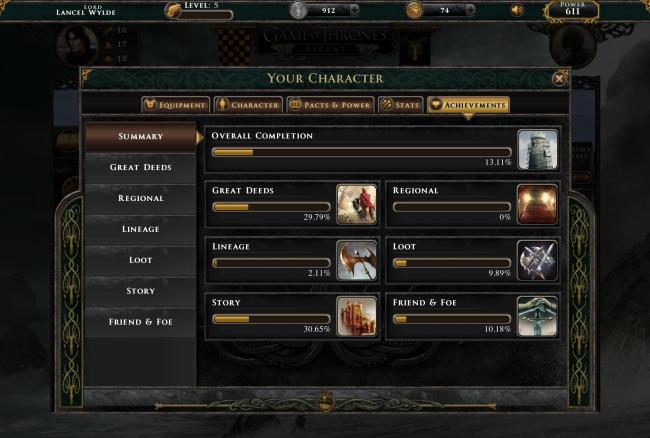 About the only thing you won’t find in Game of Thrones Ascent is the likenesses of the actors and actresses from the TV show (sorry Sean Bean fans!). This means the most prominent characters from the show and books are heard but not seen, and while the artwork for everything else in the game is fine, it does take a little bit of visual punch out of the game. The uglier and racier sides of life in Westeros are referred to more than they’re shown, which could be a relief or a disappointment depending on your personal tastes.

You’ll also find some quirks when power or the statuses of your Sworn Swords don’t appear to update properly, though problems like this are nothing that reloading the game won’t fix. Gold is the premium currency and can be used to buy some pretty powerful items, but since you can also earn it by logging in consistently, it doesn’t appear to be something that will unbalance the gameplay.

In other words, there’s plenty more to like here than to gripe about. Game of Thrones Ascent isn’t the first Facebook RPG to tout a more immersive, story-driven experience, but it’s one of the more successful ones so far at actually delivering on that promise. Whether you’re a fan of the source material or not, this is one game that’s definitely worth playing.