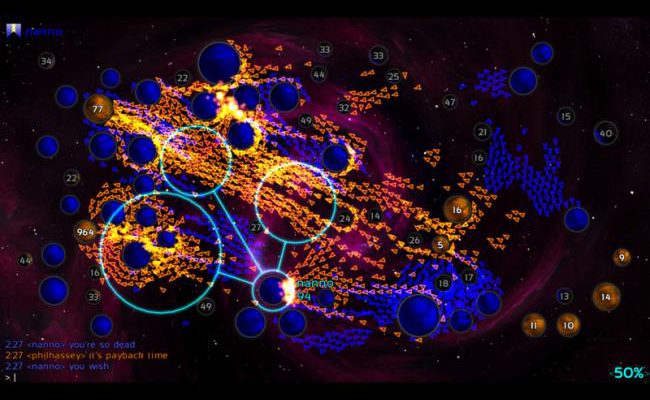 Sic spaceship swarms on your foes to take over the universe.

The universe is filled to the gills with celestial bodies. And, let’s face it—someone’s got to conquer them all in the name of humankind, right? Well, such an esteemed galactic commander happens to be you in Galcon Fusion, the most recent installment in the popular Galcon series.

This real-time strategy game puts you in command of a crap load of spaceships that’ll scatter like nectar-starved killer bees in an overwatered greenhouse. You’ll release these ships from a single planet, eventually spreading them out to capture all the planets shown on the screen. The goal is to colonize all of them before your enemy does, naturally. 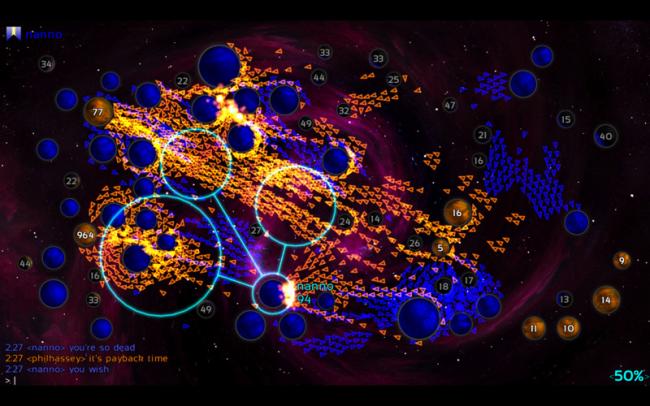 It’s a simple numbers game. Like in any divide-and-conquer venture, a certain number of units are required to take over a given territory. For example, if a planet has the number 5 on it, you’ll need at least five of your ships to infiltrate the atmosphere in order to claim the hunk of rock as your own. (You can adjust the percentage of ships you send out from a planet to match your strategy accordingly. After all, you’ll need to leave at least some units behind in order to defend the planet from enemy spacecraft.)

For a strategy game, Galcon Fusion is as simple as it gets, which can be a good thing or a bad thing. On the plus side, everything’s a cinch to figure out, allowing you to jump into the mix quickly. And don’t let the easy-to-pick up gameplay fool you. The action can get hectic, especially in the later levels or in different modes besides classic. For example, the numbers of enemy fleets are hidden in Stealth mode. Plus, we weren’t kidding with the killer bee analogy: The sheer number of spaceships on the screen can explode, making the battlefield look like some sort of well-attended wildebeest migration. Controls are also basic (in a good way) and intuitive; simply click on planets you want to occupy, or click on the spaceship gaggle to get it to switch course.

On the downside, because the game is so simple, complexity and replay value are low. Don’t get me wrong, it’s still challenging and fast-paced, but I would’ve liked to see more challenges introduced as you progress, or maybe some twists in the gameplay. 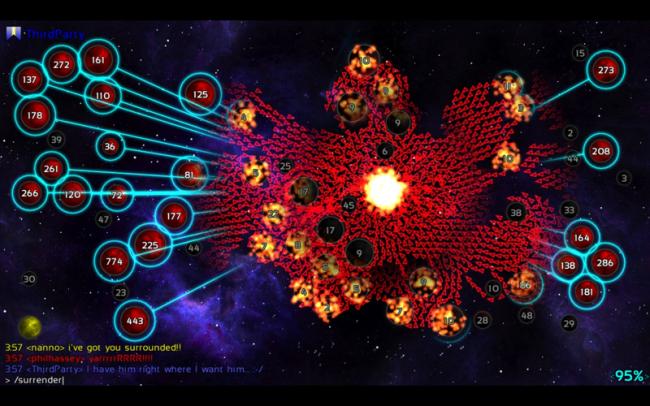 Granted, things are spiced up a bit in the various modes. There are eight of them, plus a multiplayer mode. For instance, in Billiards, you’ll have to cope with planets that drift around the screen, while they stay stationary in other modes. Or in Vacuum mode, take over all the planets in a certain amount of time. In 3-Way, you deal with two enemies instead of just the one.

There are also some fun online add-ons, like forums, chat and an online leaderboard. But you’ll need to register an account on Galcon.com to access these goodies, as well as participate in multiplayer.

Galcon Fusion is a cleanly presented, fast-paced strategy game with solid controls, but the simplicity might only hold your attention for a few rounds or so. If subjugating the universe was this user-friendly in real life, we’d see a new interplanetary honcho weekly, and that could just get downright exhausting.