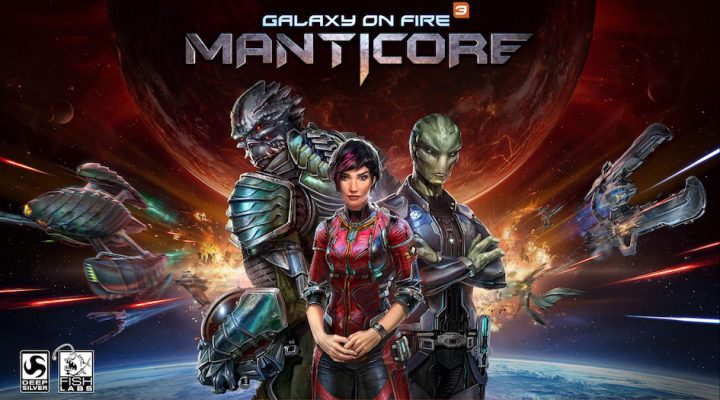 Galaxy on Fire 3: Manticore isn’t your run-of-the-mill Galaxy on Fire. Well, I guess none of them are, really. But Manticore is particularly different in a way that might make some happy and others ambivalent (possibly even a little irate): Fishlabs has stripped away all of the “adventure” elements to create something that’s almost entirely a shooter. For good or for ill, that’s what we’ve been left with.

I don’t necessarily think it’s for ill, though. Sure you can’t try to make a living (or at least extra cash on the side) by ferrying goods from one system to another, and the grandiose sense of scale is gone because you aren’t flying to and docking with all manner of space stations, but those looking for more action won’t need to wade through a bunch of story junk or have to deal with travel time. Plus the other two games still exist and you can just play those if you want something that gives you a bit more to do than just “go here and shoot the red things.” 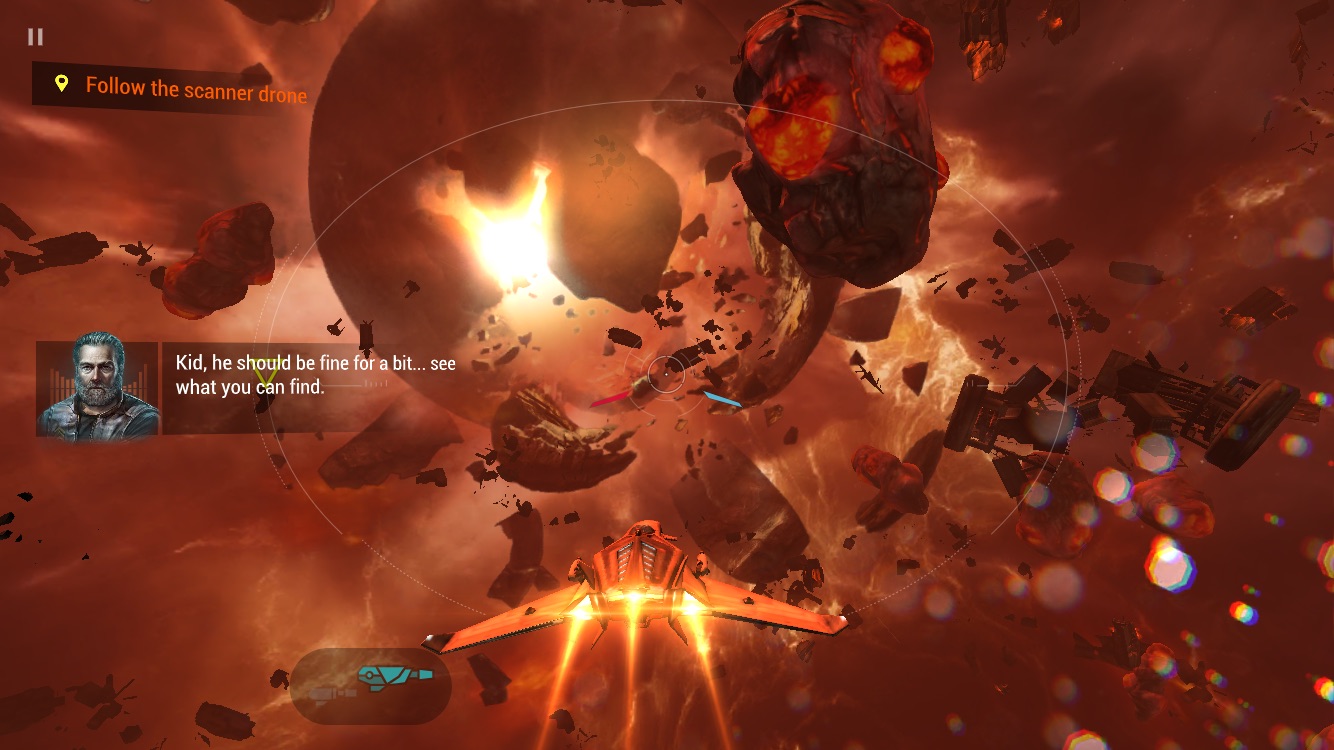 Being the most recent entry in the series and having been designed around modern mobile devices, Manticore is also incredibly good-looking. The lighting and colors of the various locations are quite something, and many of the zones you’ll visit are filled with a surprising amount of objects to add a bit more visual interest and make space feel a little less empty. Creative license abound, of course, but it still looks darn good. Good enough that I’m really happy to see the inclusion of a camera mode that allows you to pause the action, reposition the camera, and take a screen shot.

While I do appreciate the visuals and did just make a case for the new (i.e. sole) focus on shooting, it does bum me out that there’s not more galaxy to explore. One of the things I always like in spacefaring games is being able to freely – or at least somewhat freely – trundle around the galaxy at my own pace. It was often void of activity, but there’s still something to be said for sitting back and relaxing while your ship autopilots its way to your destination over the course of several jumps and a few minutes. None of that is in Manticore. Instead, you just go to the galaxy map and pick a mission. Then your ship warps in, you do whatever it is you need to do – protect a thing by shooting the hostile things, usually – and you warp back out. It feels kind of… I think “sterile” is probably the best I can come up with right now. 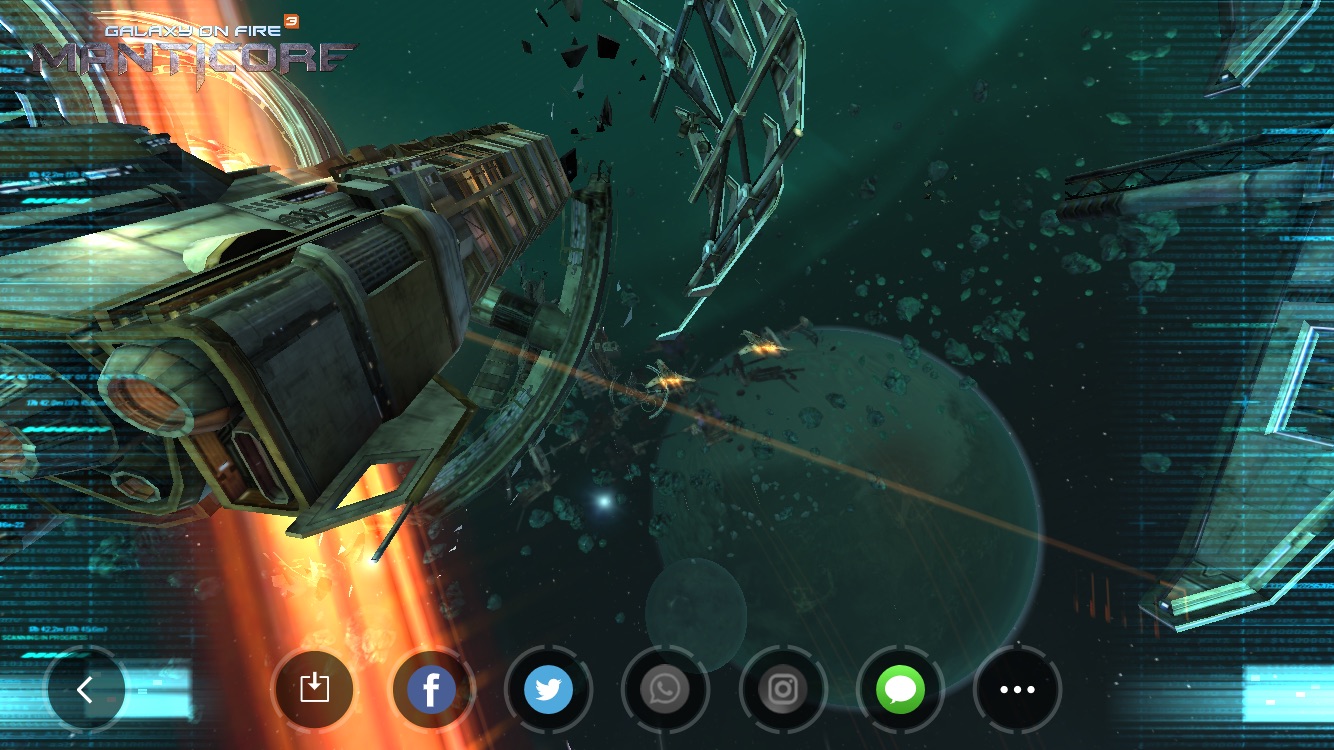 I’ll admit that the streamlined combat controls are pretty neat, though. Instead of trying to multitask tons of different space-dogfighting related actions using a touch screen – which amounts to basically two “buttons” you can use at any given time, unless you hold your phone super-awkwardly – here you mostly just use two halves of the screen. The left half controls your ship’s movement, and the right is used to speed up/slow down/roll to either side. Shooting happens automatically when you’re within range and have your reticule pointed at the proper spot. Simple though it may be I actually really like this control scheme as it lets me focus all of my energy on moving and aiming.

I do miss the sense of exploration found in other Galaxy on Fire games (hey, it may not have been much but it was still there), but its absence hasn’t prevented me from enjoying myself. I’d probably enjoy myself even more if the game wasn’t just a gauntlet of meaningless combat scenarios (many of which are a variation on protecting a specific point) — but I’ve been enjoying it nonetheless. If you’re a fan of the series who’s open to something a little different (for the series, not games in general), or if you’re just curious, I think it’s worth the look.

Amateur Surgeon 4 Review: The Gloves Are Off

Nicki Minaj: The Empire Review – Building on the Foundations